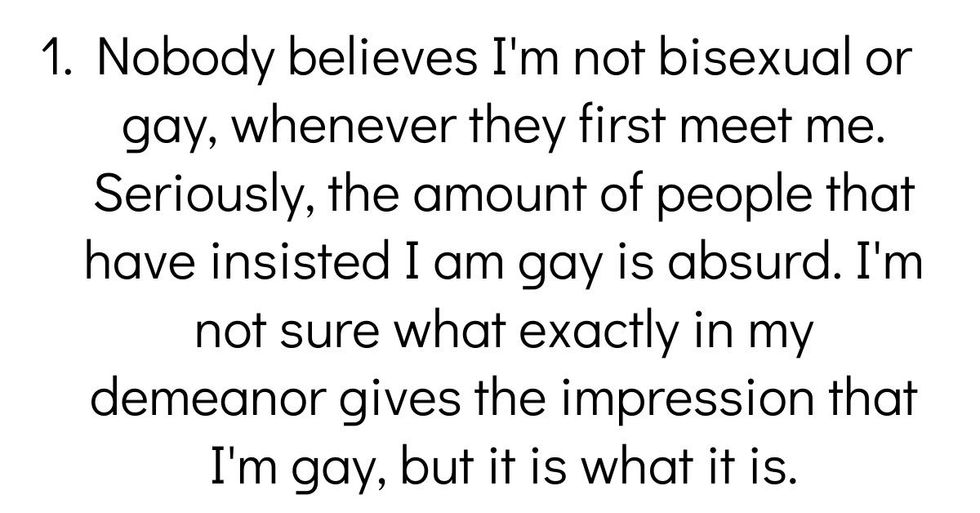 People Share What Others Are Always Shocked To Learn About Them

Do you ever do that thing where you drop insane life facts about yourself, and then never mention it again? I know I sure do. We all have those weird facts about ourselves that no one believes. Here are some of the best ones.

u/catbraithwaite asked: What are people shocked to learn about you?

That as a 1-2 year old I ran at a window, shoved the screen out, and fell two stories onto a bed of rocks head first.

Doc said the only reason I survived was because I was still young enough for my bones to bend rather than break so my neck didn't snap. I lost a tooth though.

I'm a quadruplet. It's an interesting life.

My mom is 60 and my dad is like 75 I think. Before all of us he married and divorced the same woman twice, all before he met my mom. I also have a step-brother from my dads first marriage. Another interesting tidbit for all of you nice people.

I have the opposite problem...

Nobody believes I'm not bisexual or gay, whenever they first meet me. Seriously, the amount of people that have insisted I am gay is absurd. I'm not sure what exactly in my demeanor gives the impression that I'm gay, but it is what it is.

It's more common than you think.

Most of the time, I just casually bring up the fact that I am and people are so surprised. Sometimes, people actually notice it and exclaim: 'You're left handed?!?' Yes buddy, I'm left handed...

I hear ya. 25, never had a boyfriend or kissed anyone. Co-workers were shocked and asked me why and I said I was never really interested in putting myself out there and am just trying to concentrate on my career at the moment. They usually follow up with the usual "you better find someone fast! Pregnancy gets tougher when you're older!"

People always assume I want kids. And even if I want kids I still won't have them unless I'm financially, emotionally, and mentally stable.

Pork products aren't for everyone.

My first instinct was to not like you, but then I realized that your dislike means more bacon for me, so you're cool.

That I'm in my final year of college/university, my country has its racist aspects as it is a very bicultural/diverse country, as people of my ethnicity not considered exactly "intelligent" or become very successful here.

When people ask "oh, what do you study?" And I say "law and criminal justice" the look on their faces says it all. "Oh, really?! Interesting, first year?" "Fourth year" and then their demeanor changes rapidly.

I loved your movie.

I'm 6 years older than that guy, it's disconcerting.

That I'm older than they think I am.

It's okay sometimes, but getting ID'd for every little thing is super annoying. Particularly since I'm pretty certain I don't look like a child anymore.

I could understand if I was acting like a child and dressed like one, but I was buying some groceries the other day and talking to the cashier about Christmas shopping and why it sucks, how I think I'll just get everyone stuff from the Pound shop because my gas bills are too high in winter.

She gave me the weirdest look and said,

"Doesn't your mother deal with that stuff? You should just be worrying about school right?"

Explaining to her that I was almost 30 was a painful experience, she refused to believe me till I showed her my ID.

This happens far too often.

I have a disability to my arms (basically look like a T-Rex: Thalidomide) but I can drive with my feet and have had a license for 15 years.

This is the first that I found to be surprising, mostly because it sounds interesting. I hope you don't mind my asking, but how do you have it set up?

Hi, no I don't mind at all. It's an automatic so right foot controls the pedals. Left foot goes into a stirrup attached to a disk on the floor that turns the wheel.