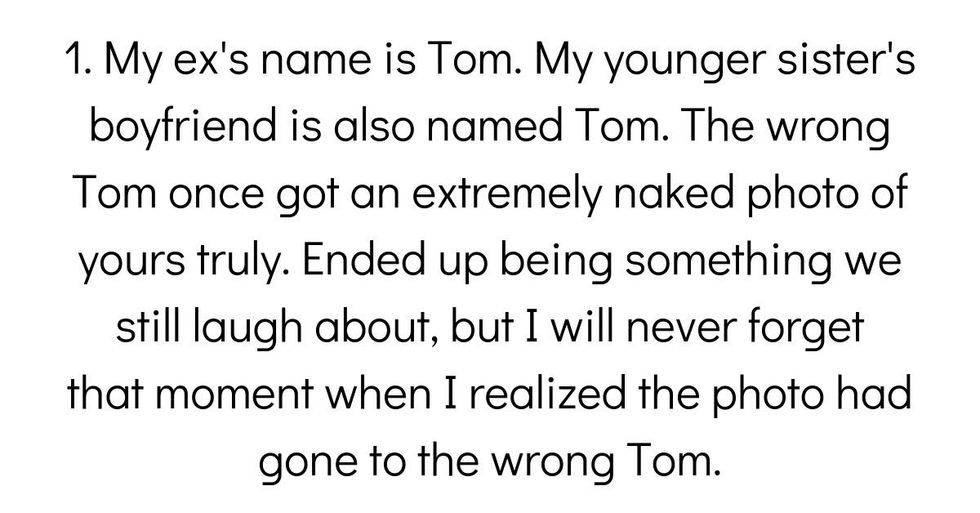 People Who've Texted The Wrong Person Reveal How It Played Out

Texting can be an excellent means of communication. You get the time to compose your thoughts, check your spelling, and make sure you're saying exactly what you want/need to say. The other person gets to respond at their leisure and convenience. It's glorious, really... unless it goes horribly wrong.

We've all been there, staring in abject terror at our screens realizing we just texted the wrong person. For some of us it's a simple "oops" situation. For others, the embarrassment and humiliation go all the way to an 11.

I know one person who was sexting his wife and accidentally sent video of the grand finale to her whole family group chat. It's been years. They haven't let him live it down.

What was your 'texted the wrong person' screwup?

Most of these stories aren't as scandalous as the grand finale incident, but there's still plenty of cringe and hilarity to be had. Enjoy the fact that these moments (probably) weren't you!

My sister sent me a picture of her baby bump and said"14 Weeks."

I accidentally replied to the wrong person with a picture of my pushed out stomach, and said "Dinner."

Meant to text my wife about my office mate who was "dieting" by eating an entire Papa John's large cheese pizza and a 2L of Coke in one sitting for lunch, but texted him instead.

Saw It On TV

13 year old me texted my middle school boyfriend "I saw people kissing on the TV and it makes me wanna kiss you"... CRINGEtopia.... accidentally sent it to my mom.

Before I started dating my girlfriend and we were just talking (actually the night before our first date) I went out with my buddy and drank way too much. I started drunk texting her, just being stupid and flirty. I'm a happy go lucky drunk, what can I say.

In between texts to her I texted a friend of mine that I was worried I was being way too forward and coming on too strong but at the moment a 45 minute uber to see the girl would totally be worth it. Except it didn't go to my friend it went to my now girlfriend. 5 minutes later she responded that she was going to bed soon but she would love to see me sober the next day.

I cringed so hard when I realized what I did but she still occasionally asks if she's worth a 45 minute uber still.

I was in high school at a New Year's Eve party and I had multiple people texting me saying happy New Years. One of them happened to be my grandmother and I responded happy New Years bitch I'm F'n wasted. I then realized it was my grandma and said just kidding. I got no response and she never brought it back up. Awkward.

My ex's name is Tom. My younger sister's boyfriend is also named Tom. The wrong Tom once got an extremely naked photo of yours truly.

Ended up being something we still laugh about, but I will never forget that moment when I realized the photo had gone to the wrong Tom. At least it was relatively tasteful as far as nude photos go...

Get On My Level

I accidentally texted my lawn guy a video of dudes power walking to rap music with the caption, « get on my level ». He did not respond.

I was 13 years old and some boy that liked me had written me a poem and messaged me it. I decided to copy it and send it to my friend. So I sent her the poem and put at the end "omg ___ sent me this, how stupid". I accidentally sent it to him.

I still feel bad about it and it was nearly 10 years ago.

Was sending pictures of my foster dog to one of the other foster people, after about a month I got a text back saying they appreciated all the pics, but I had the wrong number.

My husband and I play online games together. Hes in one room and I'm in another. I'll text him stuff I don't want to say in the party full of our friends. So I texted him saying something like "omg how f---ing hard is it to kill someone??" But accidentally texted the group chat that we're in with all his siblings. All his siblings who are middle aged and don't play video games at all....

That was fun to explain lol