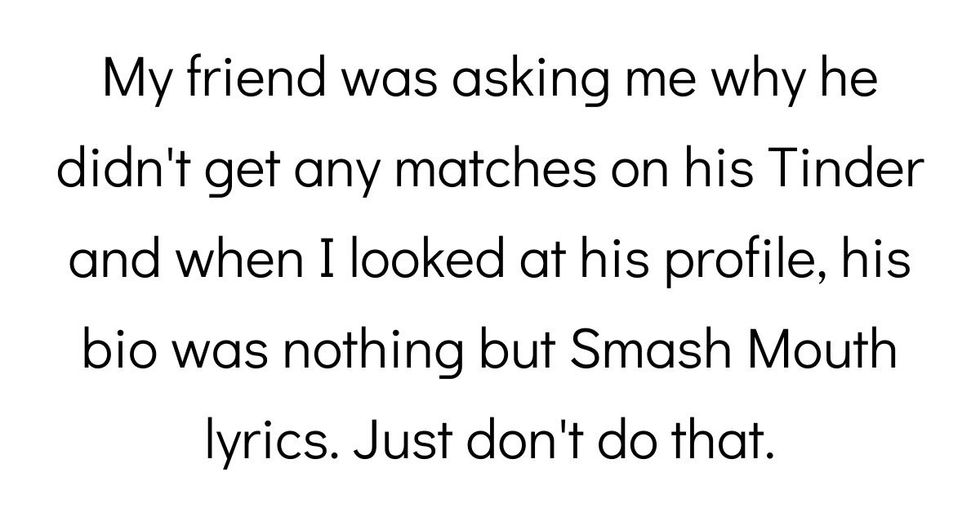 Everyone seems to have a love/hate relationship with dating apps. For some, you can actually find a partner, or at least a REALLY good hookup. But others.....well, they're a lot like the winners that these Redditors have encountered.

u/sexyasianwhiping asked: Girls of Reddit, what bios do men usually put in dating apps that are a huge red flag?

What's you objective there, bud?

I once saw a bio where the dude said "Not a huge fan of women".

He was straight, looking for a serious relationship. Not sure how he saw that one going.

Filter out the ones with any self esteem at the start!

Usually means they like saying sh*tty things with no consequences.

Sarcasm is one of those things that everybody can do, but very few people can do well.

Most people just unintentionally come off as snide when they try to be sarcastic.

My friend was asking me why he didn't get any matches on his Tinder and when I looked at his profile, his bio was nothing but Smash Mouth lyrics.

Just don't do that.

Is anyone comfortable in heels? Those things look painful.

Something along the line of "I'll treat you right". They usually don't.

That's like someone telling you they are telling the truth. Usually you don't need to point basic sh*t out unless it's not true.

Careful how you word things.

This might seem counter-intuitive... but I would see a lot of single dads with bios that say things like, "I have kids, but it's not a big deal/nothing to worry about/they won't get in the way of our dating".

Um... kids SHOULD be a big deal that get in the way of your dating life. I understand there are a zillion different circumstances involving custody that may or may not be the father's fault, but to me, it just sounded like they thought not being involved in their kids' lives was a good thing.

These aren't red flags, but they're so tired and overused.

Want a woman comfortable in jeans and a cocktail dress

If you're [characteristic], swipe left

Oh my god, so many things.

I could go on forever, I've seen some truly bizarre and/or terrifying sh*t.

The ever classic "I'm a nice guy, but I guess women don't want that"

Being a nice guy is such a low f*cking bar buddy. Like I would say, on average, almost every guy in a woman's life can step over that bar. So yeah, most women want more than a nice guy.

Self-deprecating humour can be a great thing, but if you're playing the sympathy card THAT HARD it smacks of insecure man child. No thanks.

One thing I saw a lot when I was single was guys that only listed sh*t that any self-functioning adult should be doing, and then a passive aggressive "but I guess girls aren't into that anymore/girls these days are only into bums I guess". No mention of hobbies, skills, little fun facts, favorites nothing. Just that they work and pay their bills. Usually they don't even mention what job they have.

Listen buddy, I've had a full time job since I was 17, and I've been paying my own bills since then. If you are not disabled, in school or actively looking, that is the bare minimum of being an adult. If the people around you aren't working, then you have sh*tty a** friends because I promise you, past a certain age most people are working. The reason women are rejecting you is because we are looking for an actual human being with interests and sh*t, not because we secretly dislike men who work.