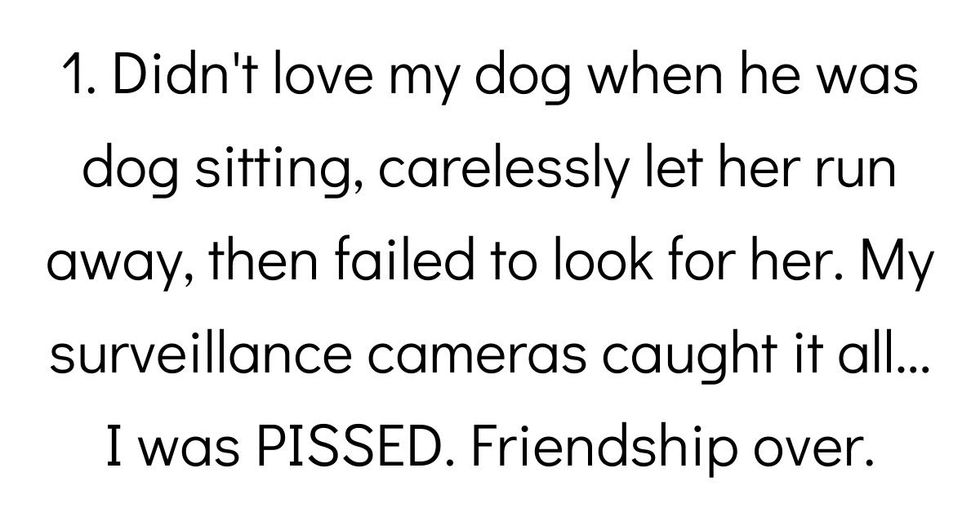 They say that no matter how close you feel, you never really know somebody.

Many dismiss the axiom as bleak and pessimistic. Maybe it's based on a very specific and biased sample of adage users who have particularly bad friends, families or marriages.

But there do exist so many horror stories of people's true colors gaining sudden exposure. Moments like that make one wonder, "Is this the fluke, or was all this time before now the fluke?"

Reddit is apparently full of people who've been forced to navigate that mind-trip.

u/Wide_Stop asked, "Has a friend ever done/said something that just straight up ended the friendship?"

Kinda Missing the Point There

I was 16 and had my first boyfriend. He got annoyed at something I said at Baskin Robins and threw me against a table and then down on the floor.

Friend told me that she didn't want to hear it and that I had no right to complain because unlike her, at least I had a boyfriend.

What Was the Goal Here?

My best mate's now ex girlfriend told everyone I had sex with her while they were dating, when I definitely had not.

She was the most irritating person I'd ever met and I don't know if I've ever been attracted to someone less than I was to her.

Ruined our friendship and destroyed her relationship with my mate.

I have chronic health issues, and my best friend was trying to get me to drive 30 minutes to her house to go swimming when I had to pack to leave town the next day.

She kept pushing and pushing, but when she finally realized I wasn't going to agree, she sat back and said, "You wouldn't be any fun even if you HAD your health."

Not the Time for Passive Aggression

I got assaulted by two guys in a summer camp and told it to my best friend. After calling me stupid for letting that happen, she apologized and I forgave her.

Then I saw her parents who asked how summer camp went and all she did was turn to me and go "well, you made many friends, didn't you?"

Does Not Make the Cut for 'Support System'

She told me to never speak to her again after she learned I was hearing voices.

Best friend and ex-coworker of 5 years. Confided in her and told her about my self harming, depression and stuff I went through as a child (you can imagine).

Two days later she not only told the whole of my old work place but told my family, too.

Didn't love my dog when he was dog sitting, carelessly let her run away, then failed to look for her. My surveillance cameras caught it all... I was PISSED.

We had one friend that said he fell on bad times with money, so we paid everything for him during the next couple of months (drinks, cigars, travel).

After a few months we found out he was going out with new people all that time and was acting rich in front of them with all the money he was saving by scamming us.

That's Quite a Bit of Power

My best friend accused me of "making him gay."

Relationship Destruction in the Digital Age

An ex-friend of mine was pushing me for inappropriate images under the flimsy guise of "joking", seemingly out of nowhere.

Then one day I got an image text; it was his manhood outlined in gym shorts and a sad and completely see through fish for compliments, then the most pathetic backpedal of the century.

She posted a video from The Onion of a fake Senator reading a fake bill.

I commented that it was a satire video and not real. She got super mad and accused me of trying to make her look stupid. She said there was no way she could've known.

"The Onion" was in the bottom right hand corner of the video.

Hard to Bury the Hatchet on That One

In college, a former friend tried to have sex with me (I'm also a guy) while I was black out drunk (He was not drunk).

He did that despite knowing I am straight and had a girlfriend at the time.

"Yeah dude so hey, Brent (his soon-to-be wifes best guy friend/100% ex f**k buddy/guy he's known for less than 3 months), really wanted to be in the wedding and i was wondering if it would be cool if he took your spot and i can see if any of her cousins backed out and if there's a seat open somewhere"

When God is Your Favorite Friend

My cousin and I were inseparable as teens. He went on his mission (Mormon) and I went to hang out for a few days when he got back, I was so excited.

He decided to tell me what a piece of trash I am and I'm going to hell because I'm gay.

How Quickly We Forget

My best friend quit as the best man of my wedding 2 weeks before weddings day.

Why did he quit? His new girlfriend doesn't like me.

Accessory After the Fact?

When I told her that was fu**ed, she defended herself by saying he was cute. I distanced myself from her for the rest of school and haven't spoken to her since.

Babies Are People Too!

Yup. She said she was going to kill herself because of me. All I did was plan an event her baby couldn't come to.

Ya Never Know Who's Listening...

I had a friend was on the phone with my brother who was hanging out with me and my ex gf.

He was on speaker but didnt know, and asked my brother of he was going to try to sleep with my gf... which all 3 of us heard.