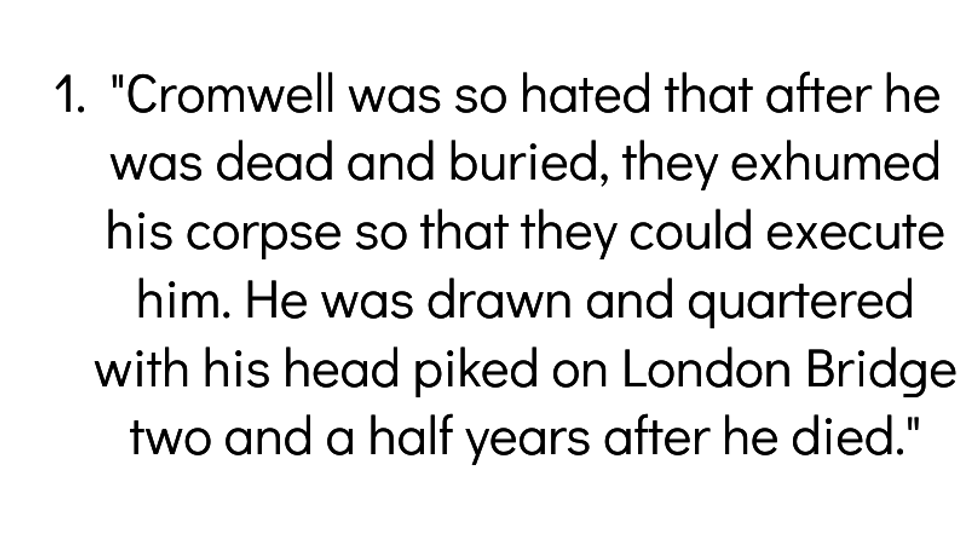 People Share The Best 'F*** You' Moments In History

Telling a person to f*ck off has been a part of history since the beginning of time. The brightest and best throughout the centuries have done it, and have paved the way for us everyday folk to do it too. Here are some of history's best "f*ck you" moments, courtesy of Reddit.

u/paddyw23 asked: What is the most "f*ck you" moment in history?

I love this level of petty.

Cromwell was so hated that after he was dead and buried, they exhumed his corpse so that they could execute him. He was drawn and quartered with his head piked on London Bridge two and a half years after he died.

On a similar note, the Cadaver Synod is both a thing that happened, and objectively the most metal band name possible.

A Pope dug up his dead predecessor so he could put the corpse on trial. The corpse was found guilty, retroactively de-Poped, and buried in a pauper's grave. Then the Pope had the corpse exhumed a second time and thrown in a river.

The active Pope was deposed as a result of this, in part due to rumors that the de-Poped corpse had washed up on a shore and started performing miracles. He was strangled to death in a jail cell.

The unPope was un-de-Poped and re-Poped three times by two later Popes (and re-re-buried in St Peter's Basilica). He was later un-re-Poped by another Pope. Sources are split on whether this last Pope merely re-affirmed the original de-Poping, or whether he re-re-re-exhumed the body, put him on trial again, and beheaded the now-re-unPope.

It is now against Church law to put a corpse on trial.

Wasn't there a musical about this?

When Henry VIII proposed to Christina of Denmark, her reply was,"If I had two heads, I would happily put one at the disposal of the King of England".

Henry VIII decapitated two of his wives, was going to off the 6th but changed his mind when she found out he was sharpening the ax.

"And just for you tonight, we're divorced, beheaded, LIIIIVE."

When the Nazis invaded France, the lift cables on the Eiffel Tower were cut so Hitler would have to take the stairs. Petty but amazing.

Oh it's true. The Nazis had to take the stairs to raise the flag on top of the Eiffel Tower. Not only that but he didn't climb it himself leaving a saying "Hitler may have conquered France but he couldn't conquer the Eiffel Tower."

I would do this.

A governor put a bounty of $500 on the pirate Jean Lefitte. The pirate's response was to put a $5,000 bounty on the governor's head.

Reverse card and a +4

Probably something everyone knows by now but my favorites are the ways the Spartans would talk sh*t as part of their culture. King Agesilaus of Sparta being given a tour of another city called it's walls "wonderful women's quarters". Or when Philip 2 of Macedon, Alexander's daddy, said "If I win this war you will be slaves forever," the Spartans simply replied "If."

I think it's Sir Sidney Smith who had just been captured by Napoleon, writing a message for him on the wall of his cell that read something amongst the lines of "I'm not angry, because I am at the bottom now, and you are at the top, but when the wheel of fortune is spun, you will begin to fall, and I shall rise higher than I've ever been before" and Napoleon, who later got locked up in the very same cell, then read that message.

Sir Sidney Smith was an awesome character, by the way. You should definitely look up on him.

Sony releasing the PlayStation after Nintendo's "f you" is one of the biggest technological Uno reverse cards in history.

Similarly, when Microsoft announced that the Xbox One was (initially) going to have purchased physical copies of games locked to individual users (or was it individual consoles? My memory's a little hazy) - effectively destroying the idea of "used games" - , Sony "announced" that the (then-upcoming) PS4 was going to have a "feature" where you could "share" games with other consoles.

It was a 22-second video of a guy giving the game to someone else.

I wish I was that rich.

The fact that the founder of Lamborghini made Lamborghini because his Ferrari broke down and the company screwed him out of a warranty.

The best part? He came to a major city, Antioch. He took notes of the city's layout, then captured the whole population and burnt the city to the ground. When he got back to the Persian Empire, he used the money he had gained from his recent sacking of towns to build a new city, with the exact same layout as Antioch. He moved all the original citizens of Antioch into this new city. He named the city Weh Antiok Khusrau, which translates roughly as 'Khosrau's Better Version of Antioch'.

Tolkien is the real MVP.

After The Hobbit was published in 1937, Berlin publisher Rütten & Loening wanted to circulate the book in Nazi Germany, but asked Tolkien for proof of his "Aryan descent".

Tolkien drafted two replies, and the TL;DR is that he - a famous etymologist - not only questioned whether or not they knew what the word Aryan actually meant, but included the line "But if I am to understand that you are enquiring whether I am of Jewish origin, I can only reply that I regret that I appear to have no ancestors of that gifted people".