People Divulge What's Truly Holding Them Back From Loving Themselves

People Share Their 'If I'm Going Down, I'm Taking You With Me' Stories 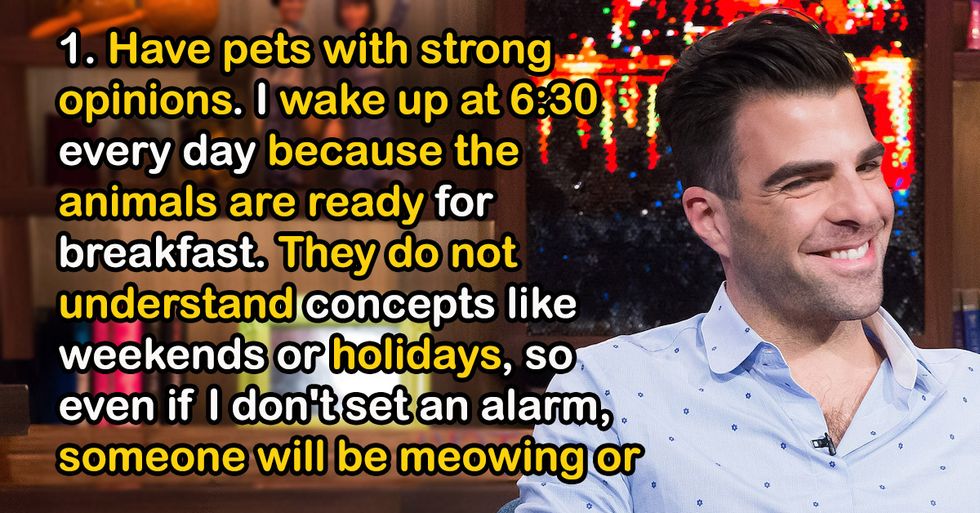 Great advice. Also, keep your alarm across the room.

Dogs have owners, cats have staff. Either way, you can't sleep in.

Expend calories during the day. Lots of calories.

Yeah... no. Do people really get up before noon?

I've done this, it works.

Your work schedule can determine your sleeping habits.

This seems so... tranquil.

The desire to stay up late never goes away.

Being a night owl could be genetic, says science.

Having a kid means NO sleep.

This method of self-torture is actually quite effective.

We night owls do have routines... of bad habits.

I need to buy some blue lights.

Well, that's one way to be woken up early.

Spoiler alert: some of us kids are always needy.

This is great advice. Naps are amazing, but they'll keep you up at night.

[rebelmouse-image 18347426 is_animated_gif=
From Your Site Articles

Why do bullies bully? More importantly... how do we get bullies to back off?

Can we just use words? Does it always have to resort to violence?

There is no reason in this world for anyone to be a bully. It's all about power and self worth.

The bully has none and it's all they want.

As much as we love to have eyes for others, those eyes are witness to some yuck.

We are easily turned on by many things and people.

But turning off and shutting down is also easy.

And once we see certain things, they can never be unseen.

When trying to eat healthy you have to do research.

We have to be vigilant and read the labels.

Just because it says "healthy"... that means nothing.

That was just years of gaslighting.

Also, just because it says "diet" you can't have 10 of them.

It's hard not to look back on history and be disgusted by a number of things which were at one point deemed acceptable, even not so long ago in the grand scheme of things.

The endless list includes segregation and women not having the right to vote.

We'd certainly like to think that we've come a long way.

But when we look back on how much we, as a culture, have evolved for the better, it also makes us stop and wonder what current customs or practices accepted in society today people twenty years from now will look back on in disgust.