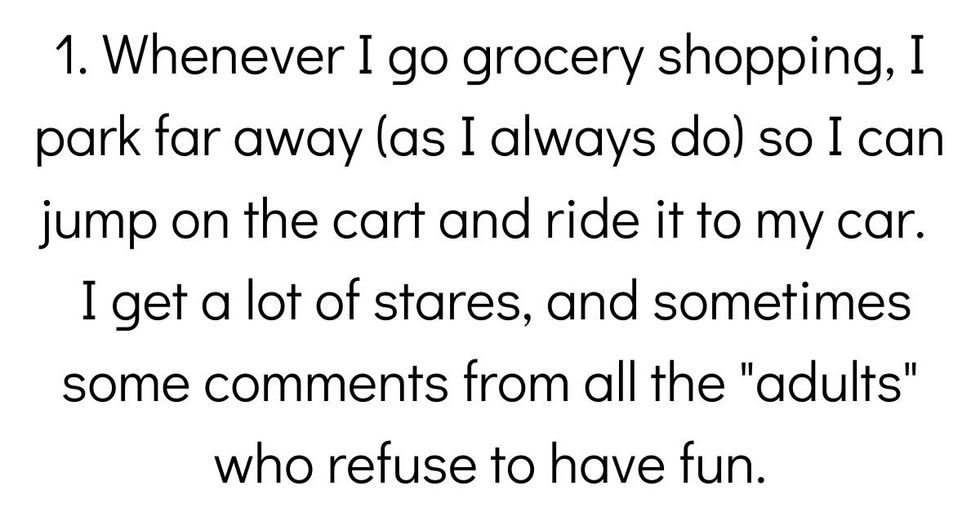 Adults Explain Which Things They Love That Society Deems Too Childish

How many episodes of Spongebob do you have to watch before you're told to "grow the hell up"? Speaking from personal experience- three. It's just one of those childhood loves that you can never let go of, one of the many simple pleasures that came with being a kid. Here are some of the things adults still love, even while all grown up.

u/miiilkyoats asked: Adults of Reddit, what is something you enjoy that society deems childish?

That's the only way to do it.

Bounding up the stairs multiple steps at a time.

It just takes so long to go up stairs one at a time. Do you also skip the last step going down?

Legos are great though.

Building Lego. Even the sets that are made for adults raise a few eyebrows. My USC Slave One is a work of art though.

Chocolate Milk is never not great.

It's the nectar of the Gods. Heck, my 73 year old dad still drinks chocolate milk for breakfast.

If it's snowing, I will always walk with my tongue sticking out to catch snowflakes.

My neighbor is a busy single mom of a 7 year old. After one big snow, I was out shoveling and the little girl came over and asked if I could help build a snowman. I decided eh, why not. We had so much fun building the snowman, when we were done the mom thanked me for entertaining her and what not. So now it's kind of become a tradition for every snow day.

Drinking apple juice from a cardboard juice box with a straw.

Swings. A nice swing at the park is so relaxing.

I mean, some people do this as their career.

Playing parkour with my fingers.

Apparently some of society doesn't like it even when kids do it. When I was in middle school, I was bored at my desk doing some finger-man moves. My teacher called me out in the middle of a finger moonwalk ala Michael Jackson, and asked me to show the whole class what I was doing. I think her goal was to embarrass me, but the class seemed to enjoy the moonwalk.

Whenever I go grocery shopping, I park far away (as I always do) so I can jump on the cart and ride it to my car. I get a lot of stares, and sometimes some comments from all the "adults" who refuse to have fun.

I do this when my wife and I go shopping. She always gives me that exasperated look and rolls her eyes, playfully, but still as if to say "you're such a child."

Then one day I asked if she wanted to ride the buggy and she sheepishly admitted that she did. She road it all the way from the store to the car. I even pushed her part way so she wouldn't have to hop down to give herself another boost.

Now she doesn't roll her eyes at me anymore.

Arcades are the bomb.

Arcades! As a fully grown woman, I love going to arcades. The kinds with tickets to redeem for cheesy prizes. Unless there's something I specifically want, I hardly redeem the tickets, but usually give them to a kid at the ticket counter or my niece. Seeing their faces light up is awesome, and I enjoy the process of winning the tickets. I can't wait to be able to take our own kids to the arcade!

I still do this.

Buying clothes based off color, and or they make me feel like my favorite characters.

Perks of working from home.

Action Figures. I know some people get them for display purposes and sink hundred of bucks on the Expensive Figuarts ones, But I just get a few cheap $20 ones.

I have some have some Kamen Rider figures I play with and have mock battles with at my desk when I need a break from my work / computer screen.

And yes, I make the noises. (I work from home sometimes)

I still have mine.

Stuffed animals. I love having those little guys near me and like them each having their own little personality, it's rather comforting, novel and makes me feel nice.

However it's rather annoying when my grandma tells me not to show anybody and tells me that I don't need them because I'm in my 20s.

That's the real way to do it.

Swimming like a child. When I go on holiday and I'm in the pool and it's full of adults just floating on Lilo's, reading books and sunbathing and then there's me, doing handstands, trying to hold my breath as long as possible, trying to swim the entire length of the pool under water, throwing things that sink into the deep end and then diving to pick them up, floating face down so I look like I've drowned, that sort of stuff.

I'm nearly 40 and I feel like a test afterwards but I can't help myself.

How is this childish?

Dinosaurs. Love them. I attend all the dinosaur events--Jurassic World live action, museums, etc. Listen to podcasts. Watch ALL the movies, even the terrible ones (I'm talking to you, ScFy Saturday Night Creature specials). To not feel weird I used to bring my nephew along to the kids events. He's 16 now and not so eager to listen to lectures about all the different types of triceratops. My friend has a 6 year old sister who has replaced him as my fake child. She hates dinosaurs, but she adores me.