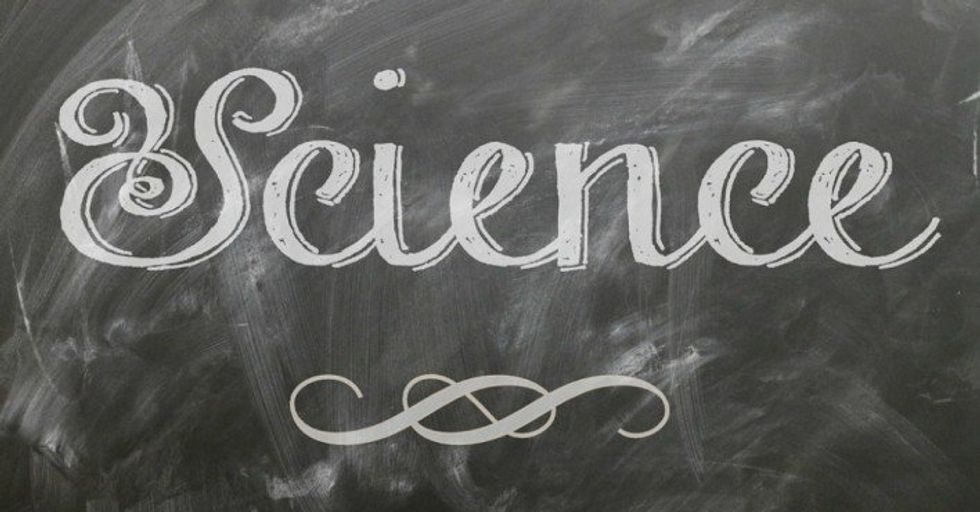 1. Scientists finally concluded that the chicken came first, not the egg, because the protein which makes egg shells is only produced by hens.

3. Scientists used the sperm from a Black-Footed Ferret who had been DEAD for 20 years to successfully produce offspring. The Black-Footed ferret is a critically endangered species.

4. A 10-Year-OldAccidentally Created in 2012 a New Molecule in Science Class: Tetranitratoxycarbon.

6. "Sphenopalatine ganglioneuralgia" is the scientific term for brainfreeze. Now you can use it next time you chug your Slurpee!

7. Urine isn't just useful for your iphone. Scientists have actually come up with a way to grow teeth using urine. Yummy!

8. Is breathing a chore for you? Well, you're in luck! Find out why on the next page.

Scientists have developed a microparticle filled with oxygen that can be injected into the blood stream, so we can live without breathing. Wow.

10. The World's oldest known creature, a mollusc, was 507 years old until scientists killed it by mistake. Oops!

12. It only takes 6 minutes for brain cells to react to alcohol. So next time you think you need to do shots to "get there", you are probably fine to slow down a little.

13. Stick your tongue out when it's raining! Rain contains vitamin B12.

16. Looking to create a quick, custom ladder? If you could fold a piece of paper 50 times, its thickness would exceed the distance from here to the Sun.

17. Though not confirmed, Researchers believe the first human case of HIV was probably in Kinshasa, Congo, around 1920.

18. Surprisingly enough, bees have an extremely amazing skill. They can actually be trained to (Continued)

Bees can actually be trained to detect bombs.

20. According to research, friends usually share more DNA than strangers.

21. Babies have around 100 more bones than adults. Here's how it works: Babies have about 300 bones at birth, with cartilage between many of them. This extra flexibility helps them pass through the birth canal and also allows for rapid growth. With age, many of the bones fuse, leaving 206 bones that make up an average adult skeleton.

22. An asteroid once destroyed a massive forest in Siberia without ever hitting the ground.

The event is known as the Tunguska Impact. It occurred in 1908 in Siberia when an asteroid entered Earths atmosphere traveling around 33,500 miles per hour and exploded at a height of about 28,000 feet. The resulting fireball released about 185 Hiroshima bombs worth of energy, destroying around 800 square miles of Siberian forest. Even though it is classified as an impact, the asteroid itself never made it to the ground. It was probably pretty freaking terrifying.

23. It once rained fish in a small town in the Australian outback. It doesnt end there, though! There have been numerous reports of spiders, fish, frogs, and other animals raining from the sky. Scientists think the most reasonable explanation for such events is animals being sucked up and transported by waterspouts or other tornadic winds.

24. There is a lake in Venezuela that experiences almost constant lightning.

25. Ever eaten a green orange? Well, that's because your green ball of citrus has been "de-greened" before it gets to you. Little did you know that many oranges come out green but (Continued)

Despite the fact that they are perfectly ripe and ready to eat, many oranges grown in equatorial regions remain green even after they are picked. In many cases, though, the people purchasing those oranges in non-equatorial regions are interested only in orange oranges. For this reason many oranges are exposed to ethylene gas to remove the green from the skin by breaking down its chlorophyll. So You best be happy with your orange oranges.

28. Russia is bigger than Pluto.

29. Dragonflies are tiny, non-threatening creatures now. But that's not always how it was! There was a time when dragonflies the size of seagulls terrorized the Earth. These bad boys were named Meganeura and were closely related to living dragonflies. They lived around 300 million years ago and preyed on smaller insects. How and why such large insects could develop at that time is still an open question.

30. The male giraffe will continuously headbutt the female in the bladder until she urinates. The male then tastes the pee and that helps it determine whether the female is ovulating. If she is, it's business time.

First off, a banana slug can be 6-8 inches. The slug's erect penis is actually (Continued)

Continue to the next page for more amazing facts!

32. The Banana Slug erect penis is just as long. Also, their penises emerge from their heads. After sex, banana slugs eat each other's penises.

They're also the mascot of UC Santa Cruz.

34. Famed molecular biologist James Watson was once so poor, that he put his Nobel Prize up for auction. It sold for 4.1 million dollars. The bonus? The buyer promptly returned the Prize to him.

35. The blood from a human erection has enough blood to keep 3 gerbils alive.

36. Experiments show that, upon understanding the concept of money, male rhesus macaque monkeys will actually (Continued)

38. A family of people with blue skin lived in Kentucky for many generations. The Fulgates of Troublesome Creek are thought to have gained their blue skin through combination of inbreeding and a rare genetic condition known as methemoglobinemia.

39. In 2008 scientists discovered a new species of bacteria that lives in hairspray.

40. The tiny parasite Toxoplasma gondii can only breed sexually when in the guts of a cat. To this end, when it infects rats, it changes their behaviour to make them less scared of cats.

44. Collectively speaking, humans have spent longer playing World of Warcraft (over 6 million years) than we have (Continued)

than we have existed as a species separate from chimpanzees.

45. Until the 1960s, the only reliable pregnancy test was to inject a womans urine into a female African clawed frog. If the woman was pregnant, the frog would ovulate within 12 hours. Ahh, the good ol' days.