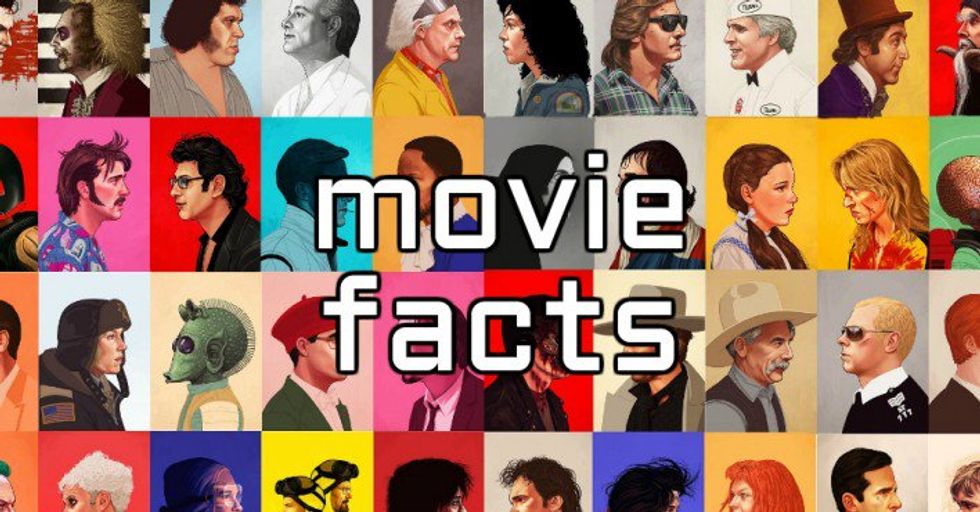 When dozens, sometimes hundreds of people come together to create a project on a large budget, magic can be made. But what happens behind the scenes of the magic? Wild things. That's what.

1. Jack Nicholson pulled a real gun on Leo DiCaprio in The Departed, even though it wasnt in the script. He thought the scene wasnt intense enough initially.

2. Prior to filming the movie Psycho (1960 movie), Alfred Hitchcock, widely considered the master of suspense, made arrangements to buy every copy of the book he could find, so nobody would know the ending. Psycho is considered by many to be one of his finest films.

3. The role of Dr. Hannibal Lecter was originally to be played by Gene Hackman, who also wished to direct; but he later withdrew from the project owing to the evolving screenplay's graphic content.

The role later on, as we all know, was played by Antony Hopkins which landed him an Oscar Award.

4. Over 450 gallons of blood were used in the production of the film Kill Bill. The fight in The House of Blue Leaves (the bar in the movie) took eight weeks to shoot. The MPAA insisted that Tarantino cut the scene due to the amount of blood. Instead he changed it to black and white, which the MPAA approved. The Japanese version of the scene remains in color.

6. In The Wolf of Wall Street, the chest beating and humming performed by Matthew McConaugheyis actually a warming up ritual that he performs before acting. When Leonardo DiCaprio saw it he encouraged him to include it in their scene.

7. O.J. Simpson almost played the Terminator, but James Cameron thought his persona was too pleasant to portray such a dark character.

8. The sound of the velociraptors communicating with each other in Jurassic Park is actually the sound (Continued)

9. The big scene in Pulp Fiction where Vincent stabs Mia in the heart with a needle was actually shot in reverse. So really, John Travolta was pulling the needle out of her.

10. The burning-of-Atlanta scene in Gone With the Wind was created by setting fire to old sets found on the MGM lot.

11. While filming Poltergeist, Robbie truly got choked during a take by the robot clown doll it wasnt until the boy turned purple that Spielberg realized what was actually happening.

12. In Django Unchained, theres a scene where Leo DiCaprio smashes a glass in a fit of rage, causing his hand to bleed. This was an accident, but Tarantino kept it in the movie.

13. The stunt double for Daniel Radcliffe was paralyzed in the last Harry Pottermovie, so Daniel created a fundraiser to pay for his college education.

14. In The Hangover, Ed Helms is ACTUALLY missing a tooth. He got a permanent implant when he was a teenager, so his dentist removed his implant for filming.

15. In The Wizard of Oz, the Wicked Witch of the West was severely burned by a flame in the scene where she (Continued)

is leaving Munchkinland after confronting Dorothy.

16. When Alex is being dunked repeatedly in A Clockwork Orange, there was an air tube underwater for him to breathe through however, it got clogged, so all of his struggles were him actually drowning.

17. Viggo Mortensen had no intention of working on The Lord of the Rings until his son begged him to do it.

19.The voice of Boo from Monsters, Inc., Mary Gibbs, was just a toddler during production. The crew couldnt get her to sit still and read her lines, so they had her play in the studio while following her around with a mic.

21. ET and Poltergeist were originally supposed to be the same movie, called Night Skies.

22. Will Ferrells reactions during the jack-in-the-box scene in Elf were totally real the director surprised him every time he played with one of the toys by using a remote control.

23. During the chestbuster scene in Alien, the actors didnt know what was about to happen, so their absolutely horrified reactions are real.

24. Sean Connery wore a wig in every single one of his Bond performances.

25. Some Wookie suits in Star Wars were made from human hair.

26. Alfred Hitchcocks, Psycho (1960) was the first American film ever to show a flushing toilet.

27. Ryan Gosling was cast as Noah in The Notebook because the director wanted someone not handsome.

28. Barbie in Toy Story is voiced by Jodi Benson, the same actor who voiced Ariel in The Little Mermaid.

29. The original cut of The Wolf of Wallstreet had over four hours worth of content.

31. Pierce Brosnan was contractually forbidden from wearing a full tuxedo in any non-James Bond movie from 1995-2002.

32. The ornaments that Marv steps on in Home Alone are actually candy.

33. In Ferris Buellers Day Off, Charlie Sheen stayed awake for 48 hours to achieve a suitably wasted look for his cameo.

34. Fantasia (1940) was originally a short called The Sorcerers Apprentice, but Walt Disney overspent on the score and decided to make it feature length film rather than waste money.

35. Sean Connery turned down roles in The Matrix, The Lord of the Rings, Jurassic Park, Indiana Jones 4 and Blade Runner.

36. To thank Robin Williams for his work on Aladdin, Disney sent him a late Pablo Picasso painting.

37. In Harry Potter, Alan Rickman was the only person other than J.K. Rowling to know Snape was defending harry because (Continued)

he was in love with Lily Potter to make his performance genuine.

38. When Edward Norton first fights Brad Pitt in Fight Club, he was asked to actually hit Pitt. Pitts reaction is genuine and Norton was trying to stop himself from laughing during the scene.

39. Heath Ledger almost broke Jake Gyllenhaals nose by grabbing his head and kissing him too hard in Brokeback Mountain.

BONUS: Jurassic Park did not use any real dinosaurs. Spielberg wanted real dinosaurs, but none of the available raptors were members of the Screen Actors Guild.