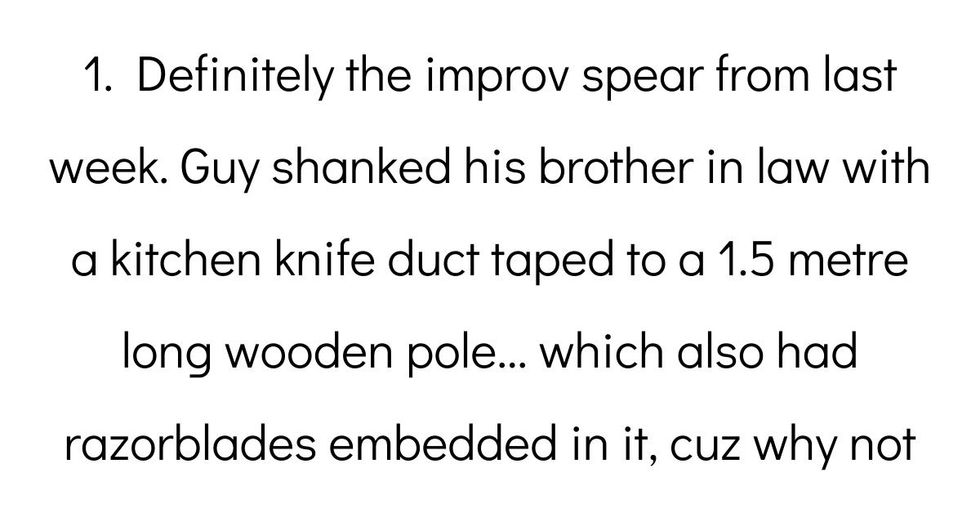 Reading these, I can't help but notice myself holding things, or carrying them in my backpack, and REALLY hoping I don't get arrested and have all my belongings put in separate bags and saved forever.

Plenty of people did get caught, though. And they got caught with really weird stuff.

But nearly as strange as the items themselves are the absurd means police officers have to use to save them in the evidence room. Not everything fits in a zip lock bag. Actually, most things certainly do not.

u/carlos_6m asked, "Police officers of Reddit: when collecting evidence, what has been the biggest moment of 'how the hell is this bagged for evidence?'''

At Least it's Got FM

A dash for an early 90s Honda Civic. It wasn't bagged. It was brought in as is.

"Drive Slow, Those are Antiques"

Im not a cop but me and a friend got caught with 3 bongs in his car once. One was about 6in one was about a foot tall and the 3rd was about 4 feet tall. The biggest one they put in a bag, then put a bag over the top and it still had about a foot in the middle uncovered. Was quite comical to see them lined up on the trunk.

A Feat of Engineering

Definitely the improv spear from last week. Guy shanked his brother in law with a kitchen knife duct taped to a 1.5 metre long wooden pole... which also had razorblades embedded in it, cuz why not

Here's Hoping it Didn't Have a Bad Wheel

Shopping cart overfilled with items. Trash bagged the top to keep items in place, On night shift, late at night had trainee hold onto cart out of the passenger window and slow rolled to department, swapped between that and him pushing it while I followed behind him both with back emergency lights on.

I was an evidence clerk for a few years. Each morning, myself and the evidence officer would go though the night's submissions to enter them in the computer with their matching case number.

He picked up one item, opened it up, and immediately jumped out of his chair screaming. I jumped up and ran, too. When an officer runs, run!

He was super angry, and went stomping down the hall to the sergeant's office. I tagged along and learned that item was a large sex toy - recovered from inside a male arrestee. That man had apparently been driving along, when he was stopped for an infraction. He was acting nervous, so the arresting officer had him exit the vehicle for a search. This item was discovered protruding from his backside.

Going Out With a Bang

I think my colleague recently came across someone who had stole all the xmas chocolate from local supermarkets and there were tubs upon tubs of roses and quality street chocs it literally filled the evidence room.

No Problem at All

I sent a massive statue for fingerprinting in its custom packing crate, it was easy; we just needed forklift and truck ... and plenty of help.

"Excuse Me, Sergeant, But Where is the Stable?"

I've always found the hardest thing to take as evidence is living animals; I have had horses on two occasions.

processed mock crime scene as part of a college course, found and bagged a used condom that was not planted there by the course's teaching assistants