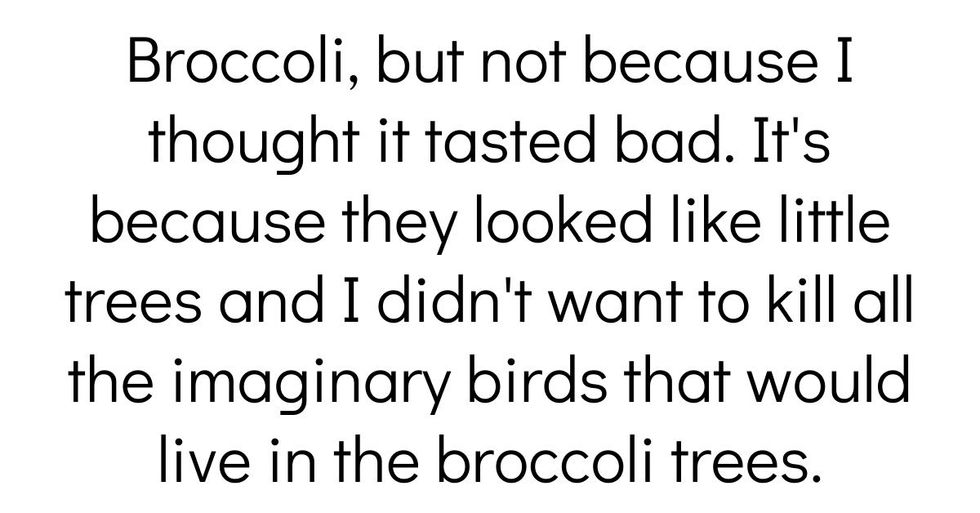 Full disclosure- when I was a kid, I was TERRIFIED of Willy Wonka and the Chocolate Factory. I couldn't handle Violet Beauregarde turning into a blueberry for some reason. Luckily I outgrew it, and now it's one of my favorite movies!

These Redditors had similar fears to mine as a child. Here are some of their best stories.

u/kumquat_kutie asked: What's an unusual thing you were afraid of as a child?

Broccoli, but not because I thought it tasted bad. It's because they looked like little trees and I didn't want to kill all the imaginary birds that would live in the broccoli trees.

I thought they were genuinely baby trees and thought it was so wasteful to prevent an entire tree growing just for one little vegetable.

Automatic car washes with the brushes.

When I was 3 these used to scare the sh*t out of me. 12 years later I'm the complete opposite, I think they're extremely relaxing.

I had a book about the Civil War and on the page about Reconstruction, there was a drawing from the time, that depicted a black family minding their own business, completely unaware that Klan members in terrifying masks were sneaking into their house to hurt them. However, at my young age, my reading comprehension was clearly low, so I couldn't quite put together why this was happening.

And that's the story of how I, a white boy living in the 2000's was scared of the Ku Klux Klan breaking into our house and trying to kill us.

Yes to both of these.

The "Unsolved Mysteries" theme. Hearing that, then Robert Stack talking about missing kids and ghosts, then it being bedtime, was scary indeed. I love the show now as an adult.

The X-files theme/opening is what got me in the same way, I always thought it was creepy.

Sand. I hated the feeling of the sand on my feet and I would refuse to step onto the beach.

My weird cousin didn't help matters when he would endlessly consume sand.

It's coarse and it gets everywhere.

How do you feel about podracing?

I was scared someone would break through my bedroom window and kidnap me.

We live on the 8th floor.

I was the same but thought it would be a Brontosaurus to get past the height. I was even a dino geek as a kid and knew they ate tree-stars. Also, ya know, extinction.

Sharks aren't the scary ones anymore.

Orcas in the swimming pool.

Not sharks, I wasn't concerned with those. It was only orcas.

It only gets worse when you realize Orcas hunt and eat Great White Sharks.

I was afraid of Mickey Mouse and Goofy, I thought these dudes wanted to beat me up. Like I'd turn it to Bugs Bunny and WB cartoons at every opportunity, because I didn't trust Disney characters, and also thought they were sh*tty and lame at the same time.

I remember one vivid nightmare in particular, where Mickey and Goofy were secretly preparing and talking in detail about the ways to f*cking crucify me.

"Heok, get the nails Mickey".

I was scared that if I eat Airheads candy, then my head would turn into a giant balloon like in the commercials.

I was afraid of Capri Sun because I thought it would turn me into a floaty silver cloud.

I'm STILL scared of those.

I was afraid of those tornado warning emergency broadcast tests on TV.

I'd just be watching like...Arthur on PBS and the screen would turn red

And then a man with an unclear voice would talk. Then that sh*t would go back to normal.

It was always so abrupt and loud. I remember running out of the living room to my parents all the time.