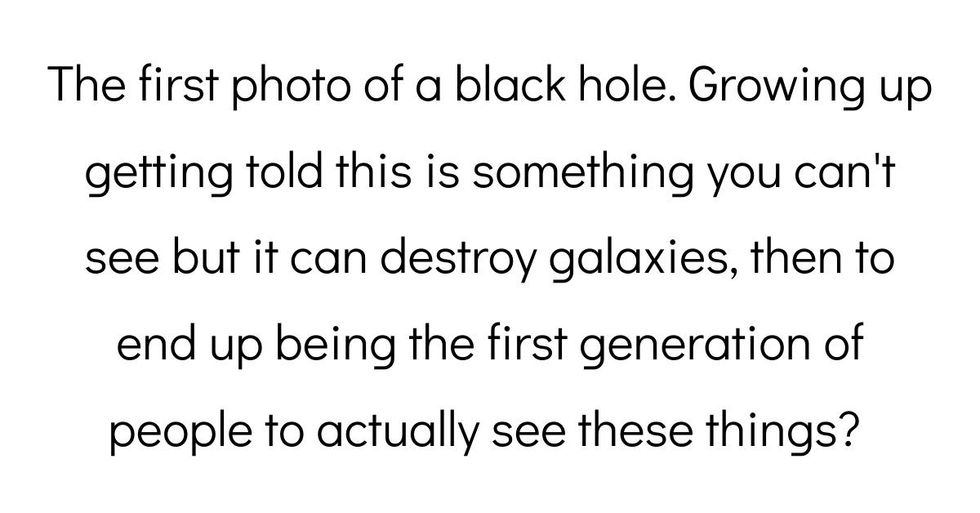 People Share The Craziest Things To Happen This Past Decade

It's almost 2020 y'all!!!! The end of the decade that gave us the iPad, the new Star Wars trilogy, and Lizzo, and the beginning of one that is bound to give us an abundance of positivity and happiness. But we will always remember some of the crazier things the past decade has brought us, including the ones you are about to read.

The New Horizons spacecraft getting within a few thousand miles of Pluto and transmitting clear pictures of Pluto back to Earth.

Scientists seeing the detailed picture for the first time.

The first photo of a black hole.

Right!? Growing up getting told this is something you can't see but it can destroy galaxies, then to end up being the first generation of people to actually see these things? Insanity.

Ozzy lived through it.

Or Keith Richards. Just further proof he harvests the souls of celebrities who have died this decade.

Get it together, Apple.

Evolution of the mobile phone.

In only a couple years the focus went from being small, to thin, to big, and now to a flat bar of soap CAN YOU STOP REMOVING ALL THE F*CKING PORTS, APPLE.

The explosion of Social Media.

Good answer. In Stockholm where I live pretty much all people my age had already had Facebook since around 2007-2008, and some also imported iPhones, but things really exploded around 2010 when suddenly over the course of a few months everyone got a smartphone.

So maybe smart phones had been an even better answer. Everyone having a computer in their pockets is pretty crazy when you think about it.

If you had told anyone in either country that Donald Trump would be the president of the US and Boris Johnson would be the prime minister of the UK, they would have laughed at you.

How does this happen?

We lost a f*cking plane and still haven't found it!!!!

Amelia Earhart: "Am I a joke to you?"

Now I gotta wash my mouth out with soap.

Idk if you guys remember but people started f*cking eating soap for fame.

The reality of it was that the "Tide Pod Challenge" was never a challenge and it was basically only very small kids who thought it was candy, and old people, who ate it.

But it didn't stop the media from blowing it out of proportion and making DAE STOOPID MILLUHNUHLZ??? xDDDD jokes.

D*cks out for Harambe.

We all got our genitals out for a deceased primate.

I just can't believe that planking happened this decade.