'What Does Purple Do?' And 25 Other Surprisingly Deep Questions Children Have Asked. 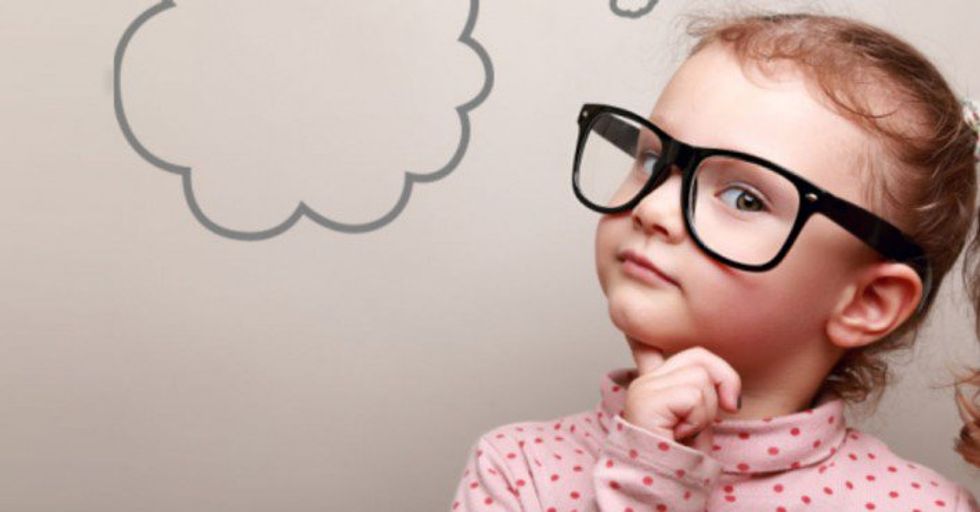 "What's the phone number for Heaven?"

People on Reddit were asked: "What other surprisingly deep questions have you been asked by kids?" These are some of the best answers.

2/26 My daughter came to me and said, "Daddy, I have a problem and maybe you can help me out with it. How do I know that I'm real and not just a dream of someone else?"

The question caught me off guard, but I decided to introduce Descartes to her and said that there was no real way of knowing, but that there was a guy who used to think about these types of things and he said, "I think, therefore I am" and that means that if you are thinking and can create, then it is the best proof that you exist.

She countered with "How do I know that it's not just the dream making me think that I am thinking?"

At that point, I knew that I wasn't going to win and told her that thinking was still the closest to proof that we have. It contented her enough and she went back to watching iCarly.

3/26 My cousin was 7-8ish when she came up to me and asked "Since I know English and think in English that means that someone who knows French thinks in French too right?"

I said yes and then what she said made me rather sad. "Then even telepathy couldn't stop different people from fighting and hurting each other...."

4/26 When I was a teacher, one of my 1st graders asked "Do you have any kids?" After I said that I didn't and I didn't even have a wife or a girlfriend, he said "That's too bad. Do you know how I know you would be a good dad? You never hit me."

God, I spent so many lunch hours crying in the staff bathroom at that job.

6/26 My cousin asked me (he was in 1st or 2nd grade) when we were sitting in my grandma's garden (my guess was that he read/heard it somewhere but it was still amazing that a 7 year old was thinking about such things.)

'Mike? How would you know that you are happy if you were never sad before?'
'Well you wouldn't really'
'So it's a good thing people are also sad?'

I didn't really know what to say. It's just I did not really realize that everything is relative till I was much much older than him.

7/26 My four year old nephew looked out the window when we were driving cross country:

8/26 "What if when you die, part of you is still alive and you just have to sit there underground forever?" Asked by a little four year old at a summer camp I was working at. Scared my ultra religious friend.

9/26 My brother was always very interested in the consciousness of other children when he was a toddler. Whenever there was a baby around, he'd walk up to them and their mother, frown down at the kid when they were shown to him, look at the mother and ask "Do they know they're alive yet?"

He creeped a lot of my aunts and my mother's friends out. Never got a good answer, either.

10/26 At an Italian restaurant with my ten-year-old last week: I ask him if he likes his food. He nods, pauses, looks down and says "I wonder what my arm tastes like?" He then licks his arm, looks off in the distance, and says "Tastes...neutral."

11/26 Apparently when I was 4 years old, I had this conversation with my dad.

Then I walked away and left my dad mind-blown.

12/26 My 5 yr old little girl once said "If plants need rain and sun to grow, and rainbows are made of light and water, are rainbows plant food?"

13/26 My four year old cousin asked is apparently very interested in infinity. As a mathematician, I tried to explain things as best I could for him. One day he sits down with me, draws a circle and says:

"Okay, so there are infinity lines from the middle of this circle to the sides right?"
"Yes"
"But what if we extend those lines out? is there more infinity?"

[Kid], Cantor went mad about this [stuff]. You're four. Go play with some Hot Wheels. I can't wait to see what he does when he grows up. Fingers crossed for mathematician!

14/26 As a teacher I get quite a few like that. My favorite was when a 5 yr old boy asked me "Why don't we just leave them alone, and then they can leave us alone?" when talking about wars. Or "Why do they hate us? If someone wants to hurt where I live then they must hate us."

15/26 "Why is the moon called the moon?" took me a while and a couple of science books to answer

"Why is the Sun called the Sun?" was similarly perplexing while "Why is a fence called a fence?" returned a surprisingly interesting answer.

16/26 My 5 year old daughter. Explained gravity in it's simplest form to her when she was 4. She asked about stones falling to the ground. So explained this to her a bit in a very simple way, thinking 'maybe a bit to much information for a 4 year old".

Fast forward when she was 5, almost exactly 1 year later (and we didn't discuss gravity in the meanwhile) and we were driving home. Suddenly she asks me "daddy, does light fall down as well?" After picking my jaw from the floor I checked and asked if she meant the same thing as we discussed a year before about stones falling to the ground. Yes, that's what she meant. She applied gravity to light, all by her self!

I was beaming with joy behind the wheel and was oh so proud :-) She later told me she wants to be an astronaut, discover the end of the universe and take me there to show it to me. Atta girl!

A seemingly innocent mixup of words caused a deep philosophical awakening that was very hard to explain.

18/26 After an overly enthusiastic salesperson greeted my 4 year old niece, took her hand, and started walking away with her my horrified brother had to talk to her about "stranger danger". This led to some inevitable questions like... "Daddy if I see a stranger can I kill them?"

19/26 "What if the light at the end of the tunnel when you die is just you popping out of a vagina in your next life?"

20/26 "How do I know we all see the same colors? What if my red isn't your red but actually your red is my orange?"

22/26 My 4 year old son had just lost a bunny, and was really freaked out about dying. One night we were laying in my bed hanging out and he is quiet for a while. After about 5 minutes of thinking he goes "Mama, will you hold my hand when I'm dying so I don't get scared?" I still tear up thinking about it.

23/26 My younger brother once asked me (when he was four, mind you) "Why do we have two eyes if we only see one thing?" It amazes me what kids will think of.

What in the world is the opposite of time!?

25/26 My son once asked me "What does purple do?" I have yet to come up with a reasonable answer.

I tried to explain to him in as basic terms as I could why plants grow, and that some plants grow tall so they can get more sunlight, and so on.

He cut me short, asking, "Is it because they like to grow?" I thought that was a very elegant answer.

There are humane ways to tell someone to go home after a... liaison.

How can one be so rude after being so intimate?

I'm not saying you have to snuggle and profess love, but damn, a quick... "thanks, I hope life is kind to you" goes a long way.

Redditor sumyungdood wanted to hear the tea about the times they had to tell a lover to take a hike. They asked:

"What is the worst way someones asked you to leave after sex?"

People Confess Which Guilty Pleasures They're Hiding From Their Significant Other

Most couples are inseparable and enjoy doing everything together, thanks in part to shared mutual interests.