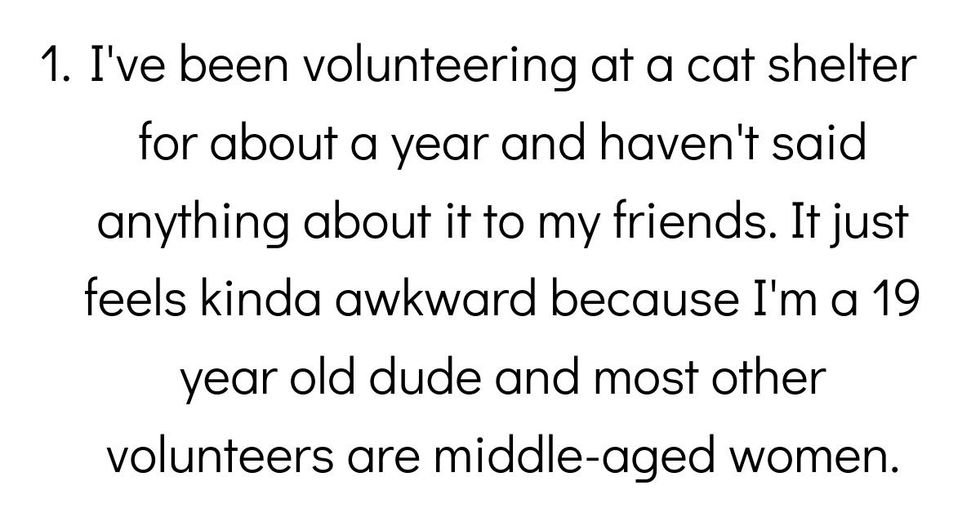 People Confess Which Weird Hobbies They Hide From Their Family

Hobbies are often things that we enjoy with others, or at least don't feel the need to keep secret from those around us. Sometimes family and friends just don't get it, though, and it's easier to just live your best life in secret than to deal with the probing questions or possible ridicule.

"What is a weird hobby that you've been hiding from your family/friends?"

My family is mostly non-American, and don't know the first thing about voice acting. They've caught me looking like I'm talking to myself doing funny voices, and pretty much thought I was nuts. Since then, I've been keeping this hobby away from them. It's not something I tend to do to get the bills paid, as I lack equipment of any kind. I just do it for fun. I like altering my voice and singing songs in different voices. I also just like to be dramatic lol.

I record myself reading books aloud. Like Berenstain Bears chapter books, Choose Your Own Adventure, Goosebumps, etc. I do the voices, edit out the mistakes, sometimes add music or sound effects. Then I listen to those recordings while doing household tasks, or especially when I can't sleep. Hearing my own voice reading helps me doze off like you wouldn't believe.

I collect Micro Machines. The classic originals from the late '80s. I have probably close to 1,000 of them and I keep them at work so my family doesn't find out and want to play with them.

I've been volunteering at a cat shelter for about a year and havent said anything about it to my friends. It just feels kinda awkward because I'm a 19 year old dude and most other volunteers are middle-aged women lol.

I build virtual houses in the Sims to post on the gallery. I think I'm up to like 8,000some downloads. (Which is not that much but... yeah I post often). On days off when no one's around I might post five builds in a day. I just find it super relaxing. I like to flesh everything out with little knick knacks so it looks like real people live there. So yeah I'm an adult who plays doll house. What about it?

Sewing, not so much a weird hobby but my family is pretty old fashioned aka really sexist so as a man they would have a field day if they knew more then half the stuff my wife made for them was actually me.

It's really relaxing, satisfying creating stuff, and I save a lot of money never having to throw clothes out.

Sometimes when im bored (havent done it in a while though), i'll put on sunglasses and sit somewhere public that has a lot of foot traffic and watch people. Its absolutely hilarious and can be very entertaining at times.

I don't really do it anymore, but I liked to get cheap liquid glue, put it on my fingers or something, then peel it off. It was always strangely therapeutic for me, but I'd be pretty embarrassed getting caught.

I've been writing a novel for the past 3 years, spending a good chunk of my time polishing it, researching, getting the tone just right. It has been a challenge because I've been writing it in English; English isn't my first language and I'm a construction worker.

I'm going to turn 60 in March. I feel young but I have a hobby that might not seem right for my age. Thankfully my spouse, 2 years younger than me, is in to it as well.

We absolutely love playing video games. We each have our own Nintendo Switches. We are both hooked on Minecraft but have tons of games.