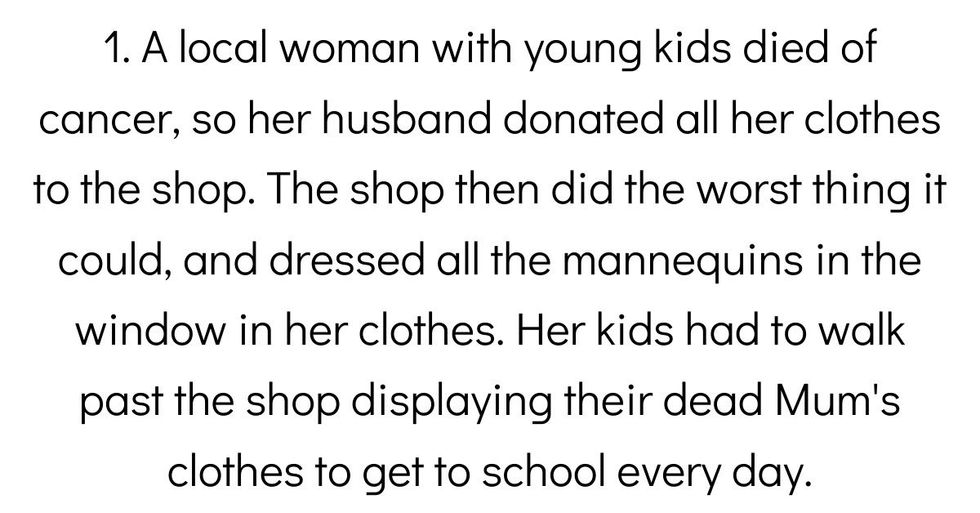 Thrift stores abound with killer clothes that only exist in that one place, a strange amount of used electronics, and extremely cheap ways to outfit your entire kitchen with silverware, mugs, pots, and pans.

But the whole time you're there you feel a keen sense that most of the items around you have been neglected in an attic for the last two decades and dusted off very recently.

Usually, that's no big deal. But sometimes things that old and given away are given away for a reason.

u/NormalBlogTM asked, "Charity shop volunteers of Reddit, what's the worst/saddest thing your shop has been donated?"

A local woman with young kids died of cancer, so her husband donated all her clothes to the shop. The shop then did the worst thing it could, and dressed all the mannequins in the window in her clothes. Her kids had to walk past the shop displaying their dead Mum's clothes to get to school every day.

Not the Intended Recipient

A teddy bear with a pre-recorded message telling someone that they love them and hope they get better.

When an Object is a Portal

An elderly man came in one day and donated his and his wife's wedding rings. He told me he had worn her ring on a chain around his neck since she died nearly 20 years earlier. They had no children and he didn't date again. He had finally decided to donate their rings because he had been diagnosed with terminal cancer a few days before. Safe to say, I had to take my lunch break early and have a cry in the staff kitchen.

Not a Ton of Resale Value

Not Joking, An Absolute Tragedy

the shop I used to volunteer in got a dead cat in one of the bags once. They figured it must have climbed into one of the big donation bins for clothes and not been able to get out

Someone is Out Here Lying About Medals They Never Earned

I found a set of military medals from the second world war in one of our local charity shops before.

Bought them and spent a considerable amount of time trying to find the owner or their relatives to return them but so far no luck.

At one point, my mom asked my dad to drop a garage bag of old clothes off at Goodwill. So he grabbed a bag and off he went. When he got there, he realized that he had actually brought a dead raccoon that she had put in a separate bag for some reason.

One day while sorting through donations, she came across a slim leather case, which she described as "very handsome." She thought perhaps it contained valuable jewelry or maybe a collector's knife. Opening it revealed an odd contraption made of rubber tubing and metal valves. Perplexed, she took it to her supervisor, who happened to be a Catholic nun.

Turns out it was a 1930s penis inflation device designed for "marital difficulties and impotency." My friend said they got a hefty price for it on eBay.

I donated all my fat clothes including a shirt I loved and had for many years. My clothes went like hot cakes which was bittersweet except for my favorite shirt which nobody appeared to want. Finally a guy took it and was using it as his rag to wipe his hands and nose while he ate. That pulled a few heart strings.