30 Little Known Stories About the 'James Bond' Movies From The Actors Themselves. Wow. 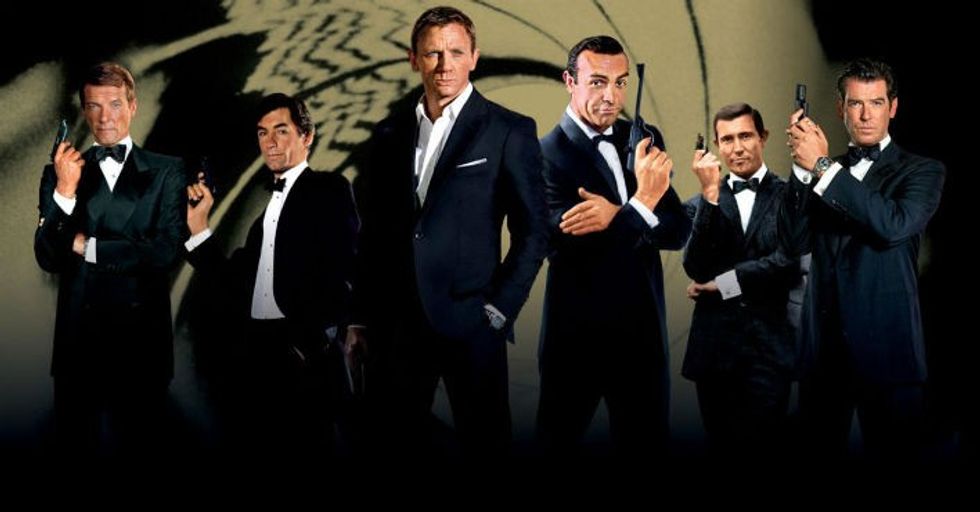 The 'James Bond' movies have always been a staple in entertaining movies, and the actors who portray 007 have gone on to become household names.

Here are 30 of the most amazing behind-the-scenes stories that were told by the actors' themselves. Check them out!

1. Daniel Craig revealed that after filming Spectre that he would rather break glass and slash his wrists than do another Bond movie.

2. While making 'Quantum of Solace', on top of getting stitches and screws, one action sequence sliced off a piece of Daniel Craig's fingertip. He joked afterwards: "Now I can get out and commit all sorts of crimes!"

3. Daniel Craig was offered the role of James Bond a year prior to him accepting it, but he turned it down at first because he hated the way the series had headed and didn't like the 'standard formula'. After reading the script of Casino Royale, he changed his mind.

4. Daniel Craig prepares extensively before each Bond movie. He said he begins working out six months prior to filming, for at least two hours a day. He's gone on to say that the role is getting more difficult as he gets older, and that he absolutely hates it when production is slow getting off the ground for a Bond movie.

5. When he first got the role of James Bond, he explained: "I was buying dishwashing tablets in Whole Foods. I promptly dropped them and went and bought a bottle of vodka!"

6. During an action sequence in Prague, Daniel Craig lost his two front teeth, and had to call up his dentist to fly in from London to replace them.

7. Sean Connery told the story of when he was learning martial arts for Never Say Never Again, and how he angered his instructor to the point that the instructor broke his wrist. Connery stayed with the broken wrist for years before getting it checked out, thinking it was just a 'minor pain.'

His instructor was Steven Seagal.

8. Sean Connery is morbidly terrified of spiders. They once had to film a scene with a spider in Bond's bed, and for Connery's sake, there had to be a sheet of glass between him and the spider.

9. Connery was already wearing toupees when filming the first James Bond movie, as he started losing his hair when he was 21.

10. Sean Connery never got any rest while filming Diamonds Are Forever as he was enjoying the Las Vegas life. As he put it: "I didn't get any sleep at all. We shot every night, I caught all the shows and played golf all day. On the weekend I collapsed - boy, did I collapse. Like a skull with legs."

He was late a few times for filming because he was on the slot machines and was collecting his winnings at the casinos.

11. During the helicopter chase scene in From Russia With Love, Sean Connery said that he almost got decapitated when the inexperienced pilot flew the helicopter in way too close to him.

12. Of the actors who have played James Bond, Sean Connery is the only one who, like the character, served in the Royal Navy.

13. During news conferences that happened while filming You Only Live Twice, the press insisted on referring to Connery as 'James Bond'.

Local newsmen attempted to photograph him in a rest room. Thirty extra private security guards were hired to combat the excess noise and hindrance but even the guards started to take photos. Connery was allegedly photographed on a toilet and the picture published in a Tokyo newspaper.

Halfway through filming, Connery announced he would not be returning as James Bond. To ease the tension the producers removed his contractual obligation to do one more 007 movie, despite being offered $1 million.

After the film wrapped, Connery was reportedly asked whether he found Japanese women attractive to which he allegedly replied, "No," causing many Japanese to call him bad names. This faux pas turned out to be based on a mistranslation on a day when Connery was exhausted after an intensive day's filming.

Connery didn't go out of his way to be too personable with the interviewer who was aghast that the actor showed up in a casual T-shirt with baggy trousers and sandals, and not wearing a toupee. "Is this how James Bond dresses?" he asked, to which Connery replied tersely "I'm not James Bond, I'm Sean Connery, a man who likes to dress comfortably."

That's crazy. Click on the next page for the more lighthearted Roger Moore!

14. Roger Moore decided to end his run as James Bond when he found the mother of the Bond girl in A View To Kill was younger than he was. Filming sex scenes with such a younger actress became too awkward for Moore, so he and the producers agreed it would be his last movie as Bond.

15. While travelling during the films, he would collect towels from the hotels he stayed in. However, when a newspaper printed an article titled "Roger Moore is a towel thief", he stopped immediately. He still has his towel collection at home.

16. He has been very open about never performing any of his stunts, unlike the other Bond actors. In fact, he suffers from hoplophobia, the fear of firearms.

17. Roger Moore had it written into his contract that he get an unlimited of amount Montecristo cigars while he filmed the Bond movies. This little stipulation led up to thousands of dollars of cigars being brought in.

18. He fell twice while filming the boat chase scene in The Man With The Golden Gun. The first was on purpose (because they told him not to do it), and the second time was by accident. On the second fall, Moore made the mistake of opening his eyes under water, and saw what the local undertakers did with the bodies of the less fortunate.

19. Despite appearing in seven Bond films, he never once ordered a vodka martini shaken not stirred, and he never drove an Aston Martin.

Click on the next page for the lesser known Timothy Dalton and George Lazenby!

20. George Lazenby said he solidified his role as James Bond when he broke a stuntman's nose during a screen test.

21. George Lazenby has stated that he regrets leaving the Bond franchise after one movie, citing bad advice at the time for his reasoning. Many people who worked on the movie said Lazenby could've been the best Bond there ever was if he stuck around for more movies.

22. George Lazenby held the distinction of being the only Bond to cry on-screen until Skyfall in 2012 with Daniel Craig. It occurs during the scene where James Bond's wife is killed.

He says the director originally didn't want to keep that particular take, stating "Bond does not cry" but Lazenby convinced him that it fit the circumstances of the scene.

23. Timothy Dalton was originally approached for the role of Bond in 1968 when Sean Connery left the franchise, but he turned it down because at the age of 22, he felt too young for the role.

He was approached again in 1980 but despised the light-hearted approach the movies had taken in recent years and declined it. He finally accepted the role in 1987, almost two decades after first receiving the offer for the role.

24. In 1988, there were media claims that the reason Dalton's Bond didn't have as many sex scenes was because of the AIDS epidemic happening at the time, although Dalton denied them.

However, in a 2007 interview, Dalton confirmed that those claims were, in fact, true.

25. While Timothy Dalton's portrayal of James Bond received mixed reviews, his is often seen as the closest interpretation of Bond to Ian Fleming's character in the novels.

To the last page for Mr. Pierce Brosnan!

26. Pierce Brosnan said that after the release of Die Another Day, he was approached by a man in a Dublin bar who asked to shake his hand. He complied, and the man said: "That's the closest my hand will ever get to Halle Berry's arse". Brosnan thoroughly enjoyed this.

28. Brosnan got a scar on his lip from getting hit by a stuntman while filming Tomorrow Never Die. Brosnan went on to say that the production of this movie was like "pulling teeth".

29. He has high praise for all the actors who played Bond, except for George Lazenby. He once said about Lazenby: "George is just an angry, old, pissed-off guy. He was never an actor, but some pissed-off Aussie who doesn't know how to show his feminine side. I met him, and he's got that kind of brittle edge to him"

30. Brosnan hated the overblown special effects and use of gadgets that became common in his movies as Bond, and wished the series went back to its low-key, darker roots. Oddly enough, after they replaced Brosnan as Bond, they did just that when they made Casino Royale.