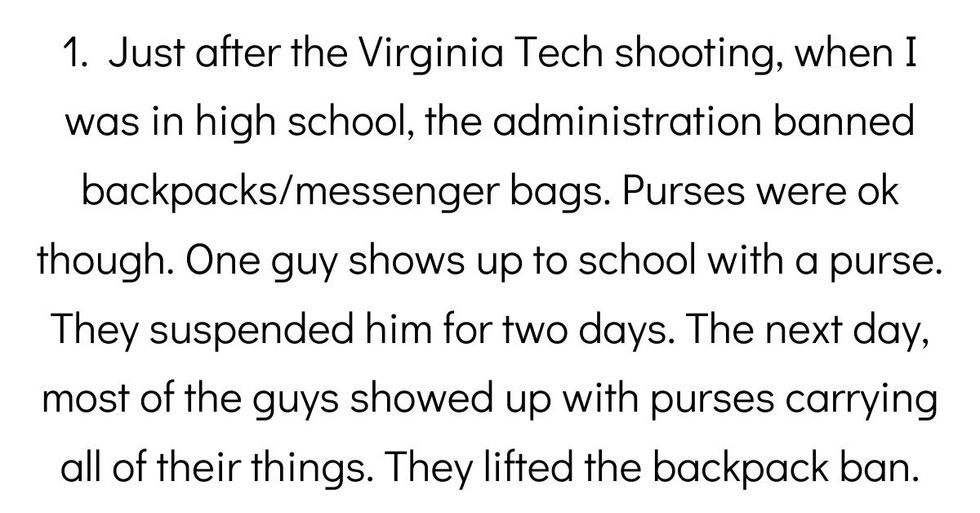 Grade school comes with a lot of nonsensical, unnecessary rules. It feels almost like a power trip that the administration is going on- at least, from how I remember it. But rules are always meant to be broken. Here are some of the clever ways students have rebelled against their school rules, straight from Reddit.

We had a French teacher who was really bad and most people barely tolerated. It happened a few times that whoever arrived first would stand outside her door as if waiting for her to show up and unlock it, and the rest of the class would just queue up behind them pretending to believe them. Meanwhile the teacher would just be sitting inside wondering where her class was.

Just after the Virginia Tech shooting, when I was in high school, the administration banned backpacks/messenger bags. Purses were ok though.

One guy shows up to school with a purse. They suspended him for two days. The next day, most of the guys showed up with purses carrying all of their things. They lifted the backpack ban.

Kid pissed in the trash can when the substitute wouldn't let him leave to use the restroom.

I'll never understand bullsh*t rules about not being able to use the restroom for 10 minutes or whatever arbitrary time is set.

Edit: I know that some kids use it to skip class, but you shouldn't punish everyone for that.

I went to a Catholic grade school growing up that had a strict boys hair length policy. It couldn't touch the collar of your shirt and I wanted long hair. So the principal came in one day to talk to the class, when she was leaving the room she called me out for my long hair in front of my classmates.

My response was to point to the cross hanging above the door and said "Jesus had long hair." She didn't know what to say right away and seemed embarrassed but then pulled me outside and yelled at me to get it cut. Don't mess with Catholic nuns.

He had that one coming.

Back in the 1980's there was one kid in my school was hardcore into the punk scene. Had a bright blue, 6" high, razor thin, stand-up-straight mohawk.

The principal gave him detention for being a distraction, etc. and his parting words that day were "And tomorrow... no more blue mohawk!"

The next day the kid came in with the same mohawk, only bright pink.

Why would they ban jackets?

Senior year, my school banned jackets. A friend was cold, wore his jacket to lunch, and the VP told him to take it off. Friend pulls out the student handbook and asked where it said he couldn't wear it. VP flips for a while and ends up showing him the, "...or anything the administration seems disruptive," clause. Friend rolls his eyes but takes off his coat.

The next day, friend comes in with the same tweed sport coat the VP wore every day.

My brother missed enough school during the year that the school required he attend summer school.

So he never went. And they didn't hold him back, because he knew all the material.

So petty. Love it.

Not me but my friends dad (so a good 50 years ago). His teacher told him his tie was the most important part of the uniform and he had to wear it no matter what. That lunchtime he gathered half his school year and the next day, about 100 people turned up wearing nothing but underwear and a tie

That was on the school.

In third grade (early 90s), my brother did not want to participate in some sort of multiple class activity.
He just hung around the edges until a teacher approached him and told him "Now dear, you can't be here without participating."

Brother took what she said to heart, and waited for a chance to slip away.

He made it about 3 miles before a family friend noticed him and drove him the rest of the way home.

I remember mom being upset at him, but even more angry at the school for taking 4 hours to notice he was gone when they took a head count after lunch.

We love some malicious compliance.

When I was in grade 7, our last class of the day, students would always bring in snacks. Our lunch shift was way too early in the day, so by the end of the school day we'd all be feeling hungry. And we were all told by our teacher that if we didn't have enough to share we couldn't eat in the classroom.

One day, almost all of us brought in enough food to share, even with the students that didn't bring anything in. We even synchronised the times that we pulled all our food out. Our teacher was clueless. She had no idea what to tell us. There wasn't any school-wide "no food in classrooms" rule, so she couldn't run to the principal.

Finally she gave into our malicious compliance and allowed us to share food for the rest of the period.

People Break Down Which Historical Figures Are Completely Overrated

People Share The Darkest Facts They Know About Cartoon Shows