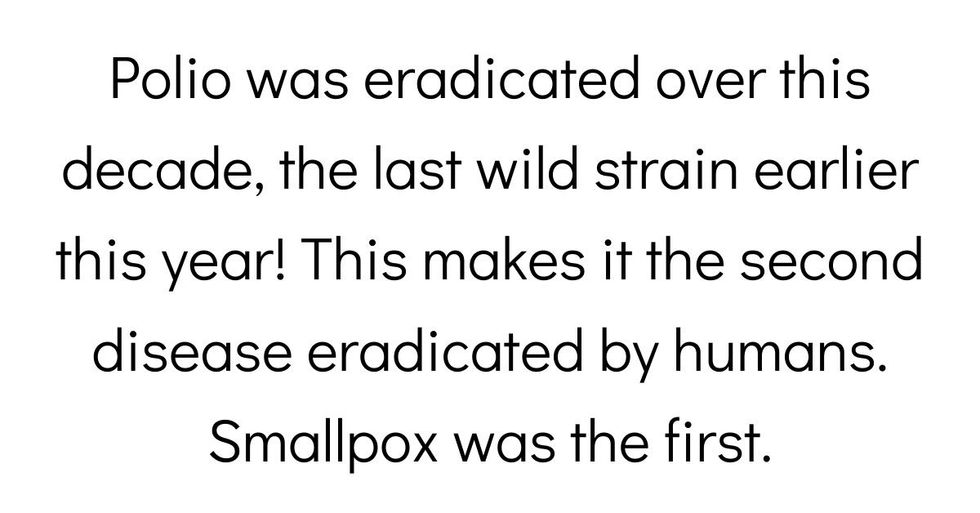 We're a few days away from 2020, and the news for the last few years has just been a tailspin of tragic. That doesn't mean the world is all bad, though.

As we enter a new decade, we wanted to remind you of some of the year's better moments.

With the decade ending, what is a positive development since 2010 that everyone should know about?

So consider this highlights reel our New Years gift to you. 2019 punched us all pretty hard in our figurative faces, and 2020 may not be any kinder if we're all honest with ourselves. So it's important to look for the good. Allow us to shed some light on some positivity for you.

Here ya go fam, have some happy thoughts!

Rhino populations have had a 41 percent increase in this decade.

After a near extinction the humpback whale population has increased to 25,000 which is pre-whaling numbers!

Pandas are no longer considered as endangered species

Lots of Greyhound Racing industries are on the brink of closing down. I think this is good news, of course there is a lot to pick up after and to stop them from selling those dogs to other countries for racing or other horrible stuff.

Polio was eradicated over this decade, the last wild strain earlier this year! This makes it the second disease eradicated by humans. Smallpox was the first.

3D Printing has saved countless lives and pushed the boundaries for new technology in the future. From personalized bone implant techniques, to the ability to print hearts from stem cells, the sheer addition to modern medicine will be greatly remembered for the overwhelming popularity and advancement of this technology.

It's not big and life changing or anything but, K9 officers, who have to develop intense emotional bonds with their dogs, now get the option to immediately adopt the dog after its retired. Previously the dog was auctioned off, and the officer either had to fight and pay way too much money, or give up a member of the family.

The world just seems a lot more accepting nowadays and less judge-mental overall. People find it easier to come out as gay or bi or trans. Hobbies aren't looked down on. Having a hobby nowadays is cooler than whatever the hobby itself may be, because the world likes seeing uniqueness and differences.

There will always be that vocal minority, especially with the Internet making it easier to project their voices but day to day life just seems so much more positive than when I was growing up.

A Triumph Of Good

I think gay marriage and families with same sex parents here in the US is a triumph of good. I was brought up in the 70s and we had family friends, a couple, named Bob and Robert. They loved each other very much and my family just treated them like every other couple, which was with kindness. I remember my mom saying to me when I was a child how much they cared for our family and how sad it was that they couldn't have their own children.

These days they could raise kids. They would have made great parents! They passed away during the AIDS epidemic and never got to see that at least a good part of the US population saw them as equals. Back then nobody had to apologize for being anti gay. Still plenty of people now who don't feel the need. But the bar had shifted dramatically. That is a good thing, and it mostly happened in the last decade.

I like this one! It certainly has wakened us up to the threat of executive corruption. Hopefully Trump's legacy will be that we strengthen the systems and never again have a traitor crook like him in office again.

I think it could also renew the Republican Party so that they need to rely less on voter suppression and disinformation to win elections, which HAS to be good for our democracy.

More younger people are in office in the US now than there were at the beginning of the decade. Regardless of political persuasion, I see that as a good thing because young people are the ones who will have to live in the world long after the older generations die out.

Circumcision is falling in the US, and more people are becoming aware of how immoral it is.

The fight against Male Genital Mutilation is finally getting some attention. Lot of push back from... anti-male interest groups, but people are starting to wake up to the fact that cutting anything off of a baby for cosmetic or religious reasons is barbaric.

We can stop both FGM and MGM in the US if we all try.