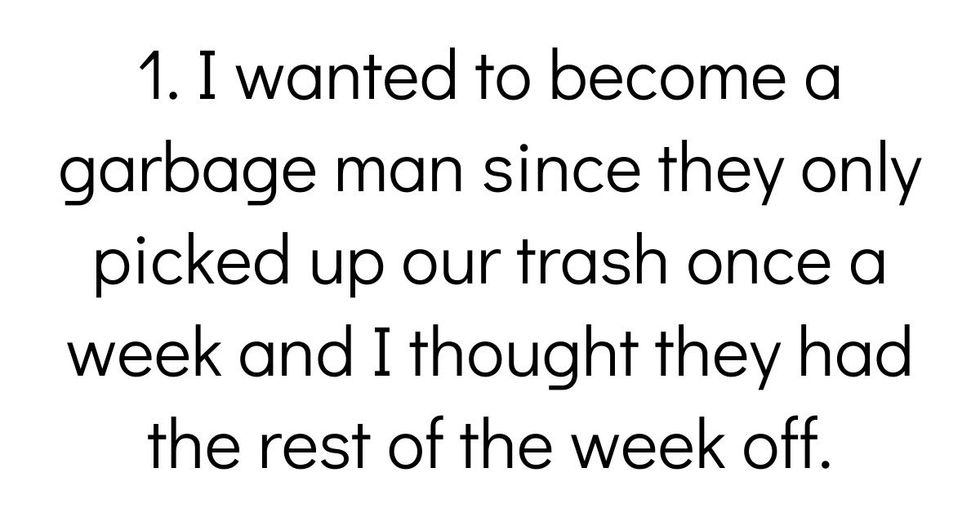 When I was a child, my dream was to be an actor. Years later, I went to college for theatre, and discovered that I lowkey hated everything about it. Maybe I just became jaded after a while, but it goes to show that our passions when we're little don't always line up with who we are as adults. I'm not alone in this- here are stories from others who experienced something similar.

u/saladforksaredumb asked: What was your dream job when you were five?

Garbage men are the true heroes.

I wanted to become a garbage man since they only picked up our trash once a week and I thought they had the rest of the week off.

I also wanted to be a garbage man, but only because I wanted to ride on the back of the truck.

I wanted to be a firetruck.

I'm confused by the number of people who are answering with inanimate objects.

I wanted to be a veterinarian but I didn't understand the sad parts of that job yet.

I wanted to be a tractor.

Never give up on your dreams.

Architect. I thought I'd be allowed to both design the buildings and drive the bulldozer.

When I was 5 some entertainer tried to drag me on stage to dance at some show at a theme park. But I had the perfect out. I wanted to be an architect and told the entertainer quite confidently that "architects don't dance".

Apparently when I was about five I told my Mum I wanted to be a Doctor so I could "do her hip replacement when she got older".

I wanted to be a doctor as well, but it was because I thought it was the only way I'd get to see some boobies. I was mischievous 5 year old.

I wanted to be a food critic. Funny because I was a picky eater, but I loved food.

"These brussel sprouts are BULLSH*T! And the pork chops are DRY and FLAVORLESS!"

I wanted to be a stand up comedian, it never happened but sometimes people on Reddit upvote my jokes.

When I told my parents I wanted to be a comedian they laughed at me, but nobody is laughing now.

The horse industry is very competitive. But if you go to college and work hard, the skies the limit. I suggest some extracurricular activities such as racing and rodeos. Keep your head on straight and you'll be a horse in no time

Source: I am a horse. Neigh.

I'm sure a lot of people want the same.

I wanted to become a Jedi and learn to use the force.

When I was 6 I asked for a real lightsaber for Christmas because I just assumed big bearded would figure it out.

The two toy ones I got were pretty neat though.