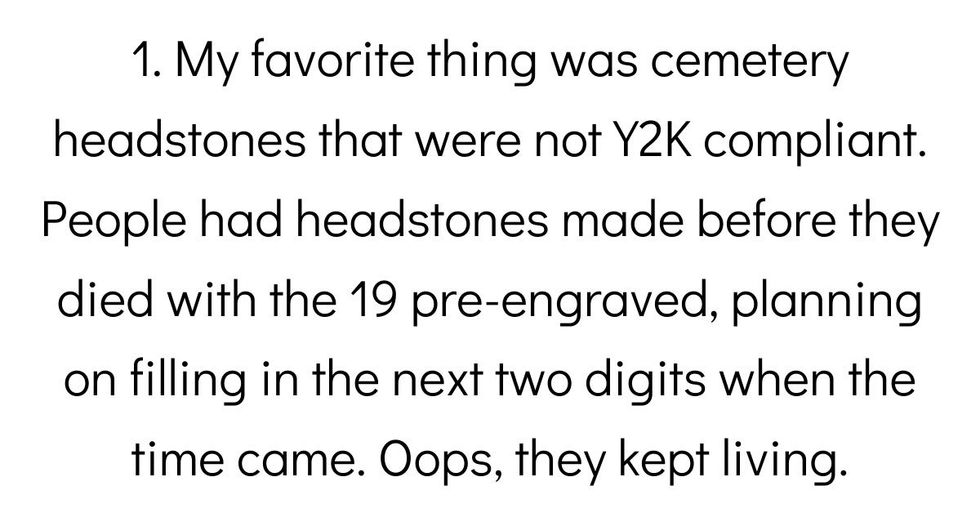 Have you guys realized that 2000 was literally TWENTY years ago? There are ADULTS who were not alive in the nineties. That's crazy to me. So they definitely don't remember the frenzy that was Y2K. Here are some stories from the people who lived through it, all those years ago.

u/SongLyricsHere asked: Y2K was 20 years ago. What are you best Y2K stories?

I was managing the IT department in a state agency, and were under enormous pressure to prevent any Y2K problems. On NY day I went to work before dawn and tested everything before the Exec Director arrived. Relieved that everything was working ok, we went to IHOP For a celebratory breakfast.

My favorite thing was cemetery headstones that were not Y2K compliant. People had headstones made before they died with the 19 pre-engraved, planning on filling in the next two digits when the time came. Oops, they kept living.

I think my favorite story I heard about actually happened before 2000, but it was basically the same idea. It was about someone in a northern European country who had turned 105 (born in like 1890) receiving a letter in the mail addressed to "Parents of" and his name. The letter was telling his parents that he was supposed to start school now that he was 5 years old. Of course, this happened because the government used a 2 digit date in the computer system and sent a letter to everyone with a "90" birth year.

I lived overseas and was watching the news with family and friends on the armed forces network, the newscast did the countdown and then at 1 they cut the feed and it went to static. There were several gasps and then about five seconds later the feed came back and the newscast shouted "Just kidding! Happy New Year!"

I thought it was pretty clever.

My mother was one of those folks that was convinced that everything was going to implode for Y2K. She thought that it would be like a post apocalyptic nightmare - no food at the stores, banks shut down, people rioting - the whole nine yards.

She desperately tried to convince me, my two brothers, and all of our families to come to her place in the country and bunker down for the duration. Of course, none of us were going for that but we did keep in touch so that she didn't worry too much.

I will never forget the phone call where she explained that she had stock piled canned goods, bought a generator, and bought a MILK COW. The cow was so that the kids would have milk since there obviously wouldn't be any at the store after all commerce broke down.

Shm. Her heart was in the right place but really mom?!? A milk cow?? None of the kids were even babies that would need milk.

She ended up selling the cow shortly after nothing happened. We still laugh about the Y2K milk cow.

I worked in IT at one of the Dow Industrial companies' headquarters, and I spent a high percentage of 1999 doing "Y2K tests" on every single computer, server, printer, fax machine and, I'm pretty sure, coffee maker.

No problems, and no signs of problems. That year was a waste of my life.

I'm a firefighter and was working on the Y2K night. Right at midnight, all of our primary radio and CAD systems failed. It was a huge, system wide failure just like everybody predicted would happen. We were getting dispatched by backup radios and our dispatchers were writing down calls on pieces of paper. The suck is that my engine company had the first call of the year, but we didn't get credit for it because of the confusion. When they put calls into the computer after it was fixed we ended up with call 00013.

We were in high school. Had a huge group of friends 30+ that spent New Years at one my friend's parent's house.

We were doing the countdown. Everyone was nervous from all the hype that computers were not going to be able to calculate the date correctly and revert to 1900, shutting down vital city systems. (Internet and computers were just beginning to take over managing everything. For reference, I had a beeper in high school guys!)

Friend's dad comes upstairs looks at our scared faces and starts his a** off, slapping his legs and doubling over with humor. Can't catch his breath. He flipped the breaker. Lights back come on. Happy Y2K everyone!!

To be fair, I do this every night.

I got up at 3 am to check if the world had ended. It had not, so I went back to bed.

That's not so bad.

My dad had been paid quite a bit over the previous year, as he was a COBOL programmer 20-30 years before, and it was mostly COBOL programs that people worried about. The panic helped increase his wage. A lot of stuff did end up getting fixed, which is why things didn't go as badly as predicted.

He didn't work at all this century. Part of it was that he had made enough that he could stop working, but I think a large part was that he developed an inflated sense of what his skills were worth, over those few years, and has never been offered anything close since.

New Year's Eve itself I had a very bad cold. I spent most of the night huddled in my bed. At midnight I went across the street for half an hour. Some friends had gotten the key to the roof of the engineering building (the Wallberg building) and we went up there to watch the fireworks.