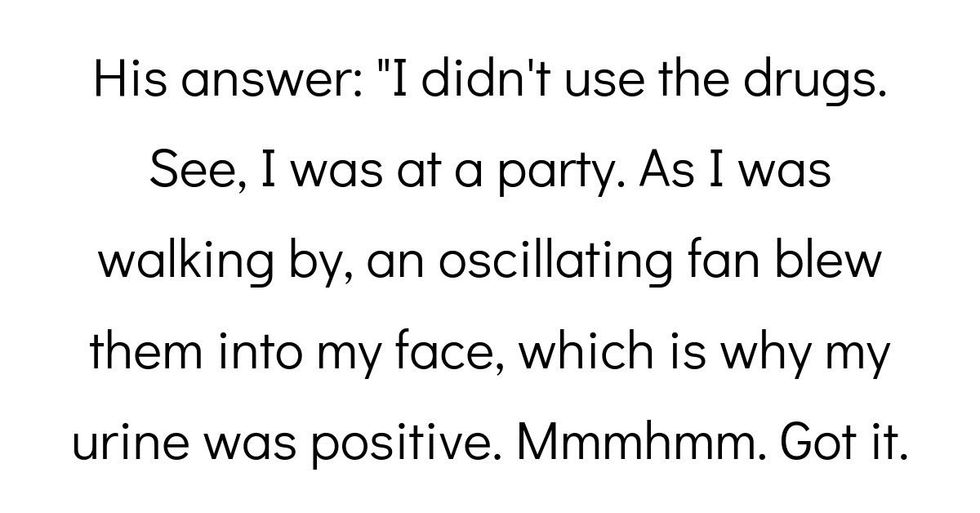 Doctors Reveal The Weirdest Thing A Patient Wouldn't Admit To Them

Lying to a doctor is probably not the best decision to make. When it's life and death, facing the embarrassment of how you actually got hurt or ill is the right way to go. I mean, better that than dead, right?

mitsubishi-corvette asked: Doctors of reddit, what is the weirdest thing a patient wouldn't admit?

ALWAYS get lumps checked out.

"This one is sad, from my old roommate.

Girl had a very large lump on her breast that she didn't tell the doctors about. She actually went to the hospital for migraines, saying they were getting increasingly bad. When they found the lump, they asked why she didn't say she had that."

She said she knew it was going to kill her eventually, but she just wanted to get rid of the migraines because they giving her a lot of pain in her last months."

"I admitted a guy for chest pain. As part of the workup, I did a urine drug screen which came back positive for cocaine.

After the rest of his cardiac workup was negative, I said to him, "Good news, you didn't have a heart attack. It's likely that your chest pain was caused by cocaine."

His answer: "I didn't use the drugs. See, I was at a party. As I was walking by, an oscillating fan blew them into my face, which is why my urine was positive.

Wasn't this an episode of Glee?

"Being pregnant and also a virgin.

"Nurse here. Had parents bring their 3 year old son to the emergency department for one month of abdominal pain that kept getting worse. I ask all the routine questions for this complaint, lots of questions about his poop....is it bloody? Diarrhea? Mucous? When was his last bowel movement? Any changes in the stool? They deny any other concerning symptoms but abdominal pain.

We do bloodwork, ultrasound, X-ray. Everything comes back completely normal but the kid is intermittently screaming in pain, curled in a ball.

Over the next 5 hours I continue to repeat the same questions, I asked repeatedly if there was anything else going on that they could think of....nope.

The kid just doesn't seem well but we have no reason to keep him, we decide to watch him a little longer, let him eat. The kid eats a bunch, a PBJ, apple juice, crackers, popsicle, no pain so we decide to send them home.

I bring in the discharge paperwork and I'm about to start going over instructions and they dad goes "You know.....for the past 3 months he's had A LOT of worms in his poop"

WORMS. You spent 6+ hours denying worms. I literally just turned around and walked out of the room without saying a word. I was laughing almost to the point of tears. Could not wait to tell my resident. Deworming medications, and they were on their way."

How does that even happen?

"One of my lecturers told us a story of when he worked in ED there was a man who refused to acknowledge or tell them how a jar got stuck in his rectum.

They were taking him to the OR as it has created a vacuum seal and couldn't be removed without shattering but realized his BSL (blood sugar level) was off the charts. Really, really high. They were considering postponing the surgery to work out wtf was going on. When he ended up talking he told them the jar was full of honey before it got lodged, and was rapidly absorbed by the rectum, causing the insane levels. Wat."

Oh my god, STOP sticking things in your penises.

"I guess it's not super weird that this patient wouldn't admit this, but it's weird in the sense that it was super obvious what happened so he might as well just admit it.

I used to do patient registration in the ER. Two of us were wheeling around our computers and registering patients off of ambulances and getting patient information in rooms. A middle aged guy comes in on an ambulance and my coworker takes it. So I'm finishing up some paperwork and I go to our front office and pull up the patient tracker board so I can see what still needs to be done and a new patient pops up on the board...

My coworker walks into the office looking scarred. She explained "The nurse asked him what happened and he said he slipped. She told him that doesn't seem likely. So he said he had an itch and thought it would help." We later found out from the nurse that he finally admitted that he "saw it on tv and thought it would feel good". His 20-something year old daughter was with him, but she clearly had some form of developmental disability.

It was all around a sad situation and I hope someone told him about sounding and he did some research on safe practices for kinks/fetishes. Apparently they were both lodged in there pretty badly."

What a "funny" joke.

"Had a patient in hospital, I forget what for. The point is that he disappeared for a few hours. When he came back he was tachycardic to 160bpm, massive pupils, couldn't sit still. We asked him what he'd taken while he was out. Nothing, he swears, he went to the pub and just drank lemonade. Ok, we say, were gonna take some blood and find out what you've taken. He then pipes up that the friends he was with would think it was funny to spike his drink. What, we asked, did he think they might have spiked his drink with? Speed, he says.

What do you know, bloods confirmed that he had taken speed. But he insists he didn't take it, his drink was spiked."

"I'm a nurse. I had a kid once who I needed to get a urine sample from. He was 8. I gave him a cup & pointed him to the bathroom. I went to check on my other patients & came back, kid was still in the bathroom. I go knock on the door, "Hey buddy, you ok in there?"

I go back to his room a few minutes later & he hands me a bag full of water with a cup inside that also appears to be water. I pour the water out of the bag.

"Hey buddy, are you sure this is urine in this cup?"

"Yea! My pee is ALWAYS clear."

Patient is wheeled off the Xray.

I check the temperature of the so-called urine in the cup. It was ironically the same temperature as the water from the faucet.

Come on little homie, you gotta do better than that."

"They were almost 60 years old and taking a drug to make them lactate so their husband could pump them as it would "help their fibromyalgia".

Took a while for them to admit why they were taking it."

"Had a patient refuse to admit he swallowed a pen, even though an x-ray showed the pen in his small bowel and we took the pen out during an emergency surgery."