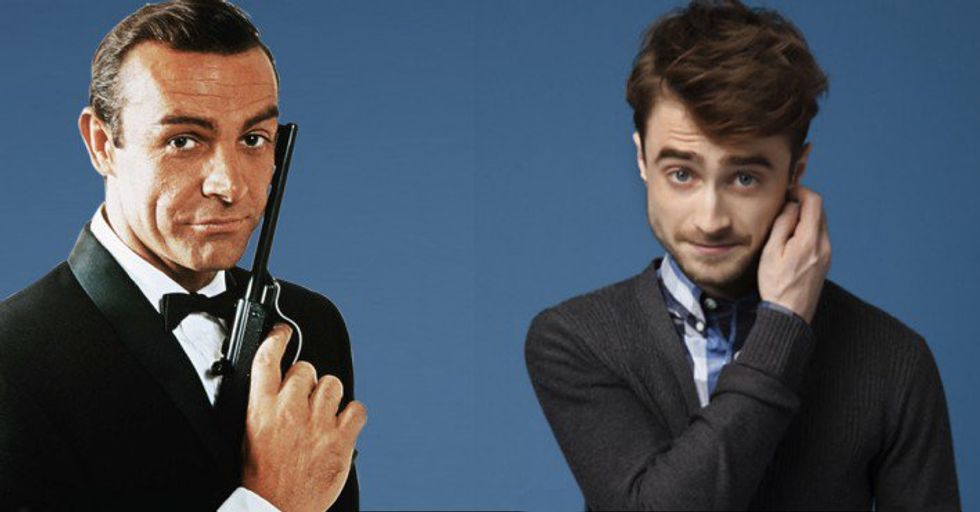 I'm obsessively opposed to the typical.

1/35. Dwayne Johnson made a motivational alarm clock app. The 'Rock Clock' doesn't have a wimpy snooze button, but has messages from The Rock himself to help get you out of bed in the morning. You can also sync your alarm to his sleeping schedule if you like waking up at 4am.

3/35. Despite his profanity-laced songs, Eminem does not allow swearing in his home.

4/35. Sean Connery wore a hairpiece for every James Bond movie, as he began balding at age 21.

5/35. Sergei Bubka repeatedly and deliberately broke the world pole vault record by the smallest possible height so he could cash in on a Nike bonus with each new record. In a two-year span, he broke his own world record 14 times.

6/35. Slash didn't actually purchase his iconic top hat. He shoplifted it from a store. He just put it on his head and walked out.

Continue reading celebrity facts on the next page!

7/35. A 73-year-old woman bought a painting from a thrift store for only $5. She discovered later that, thanks to a fingerprint on the canvas, it was actually an unsigned Jackson Pollock worth millions. Later, though, after getting excited, they figured out it was fake. What a rollercoaster!

8/35. Abraham Lincoln thought of himself as ugly. Once, when he was accused of being "two-faced," he replied, "If I had two faces, would I be wearing this one?

9/35. Judy Garland was put on a diet while filming The Wizard of Oz. That diet consisted of chicken soup, coffee, and cigarettes. She was 16 years old.

10/35. Steve Tyler estimates that he spent at least 5-6 million dollars on cocaine in his lifetime.

11/35. On New Year's Eve, 1999, Brad Pitt rented a Mexican resort, filled it with his friends, and at midnight had the government cut the power and phone lines and send in troops to raid the compound and "arrest" one of his best friends on drug charges - all as a practical joke.

12/35. Because David Letterman was a C student at Ball State, he now funds a creative telecommunications scholarship that does not take grades into account.

13/35. Andre the Giant died in a hotel in Paris. He was in Paris to attend his father's funeral.

14/35. Warren Buffett made enough money selling Coke Bottles and magazines door to door to buy a 40 acre farm at the age of 14.

15/35. In 1928 the founder of the Kodak company was so frustrated by the different number of days in each month, he insisted the company operate on a 13 month year, each month being exactly 4 weeks. They did this up until 1989.

16/35. Kurt Vonnegut, one year before his death, said he would sue Pall Mall for false advertising. He had been smoking them since 12 or 14 years old and they had still not killed him, though they said they would on the packaging.

17/35. Following Marilyn Monroe's death, Joe DiMaggio was so devastated he held a private funeral barring all the Hollywood elite, and delivered roses to her grave three times a week for over 20 years. He never remarried, and his last words were, "I'll finally get to see Marilyn."

18/35. Vin Diesal broke into a theater in New York with his brother when he was 7, with the intent of vandalizing it. When they were caught, instead of calling the police, the theater's artistic director offered them roles in an upcoming show, thus starting Diesel's acting career.

Continue reading celebrity facts on the next page!

20/35. Martin Luther King Jr. died when he was 39 years old. His autopsy found that he had the heart of a 60 year old from stress.

21/35. Prince Charles has been first in line as heir to the throne for 64 years and counting.

22/35. Jackie Chan and his stunt team are blacklisted by all insurance companies, so he has to pay himself whenever somebody in his movies gets hurt.

23/35. Despite being a millionaire, Steve Jobs only paid $500 a month in child support to his daughter, Lisa. A girl he named a computer after, but attempted to deny paternity for.

24/35. When Home Alone 2 was filmed, Donald Trump owned The Plaza hotel, and made a cameo appearance in one of the scenes. The carpeting was removed from the lobby so that Macauley Culkin could slide across the floor, and Trump liked it so much he never replaced it.

25/35. Arnold Schwarzenegger was already a self made millionaire at 22 years old before appearing in his first movie. He used what he learned in school to invest his bodybuilding contest winnings into real estate and to market gym equipment and exercise supplies.

26/35. The Wright Brothers only flew together once, after gaining their father's permission. They had always promised they wouldn't fly together, to avoid a double tragedy if there was an accident.

27/35. The Dr. Oz Show has been heavily criticized by the medical community, and a study has found that 54% of health recommendations on the show were not medically supported

28/35. Shigeru Miyamoto - maker of Super Mario Bros. and Donkey Kong - is not allowed to bike to work because his safety is too important to Nintendo.

29/35. The World's tallest man, Bao Xishun, used his long arms to reach 1.06m and remove plastic from the stomach of two dolphins, which ultimately saved their lives.

30/35. Scott Neeson, former head of 20th Century Fox International, left Hollywood to help children rotting in Cambodia's garbage dumps. He sold his mansion, Porsche, and yacht to set off for Cambodia and provide food, shelter, and education for the children. Scott now lives with more than 1,000 children and their families.

Continue reading celebrity fun facts on the next page!

31/35. John Cena, WWE superstar, has granted more than 400 Make-a-Wish requests - more than anyone in the charity's history.

32/35. The author of Jaws dedicated the last decade of his life to the preservation of sharks, to make up for the mass hysteria he inadvertently helped create.

34/35. According to his brother, Vincent Van Gogh's last words were "the sadness will last forever."

35/35. Mathematician Paul Erdos could calculate in his head, given a person's age, how many seconds they had lived... when he was 4.