30 People Share The Most Ridiculous Thing Someone Once Tried To Convince Them Of. 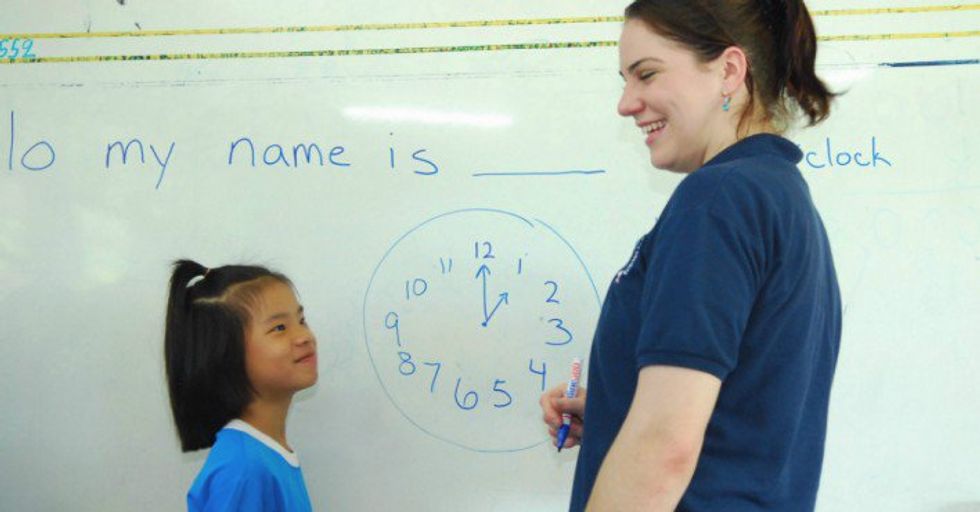 Let's face it: people are weird. But these people? They take weird to a whole new level.

Thank you to all the awesome folks at Quora who shared their wildest stories with us.

1/30. That adults could read minds. I believed this one for way too long.

2/30. That if you put lemon juice on your eyes, they will become light green or blue.

3/30. That we could and should have unprotected sex because he can't have children. We were 22 at the time so I asked him how on Earth he knew this.

He said: "I take after my dad, he couldn't have kids either, that's why they adopted me".

We didn't have sex at all.

4/30. Someone once tried to convince me that my mother, who is a paraplegic, was just pretending that she couldn't walk in order to have more votes for the election for state representative.
Stephanie Edelmuth

5/30. Wearing two condoms at once is safer.
innatetits

6/30. That humans had in fact evolved to hold extra space in their stomachs for dessert. I thought she was making the same light hearted joke many of us have when we're about to indulge, even after a full meal. She was not, and boy was she mad.

7/30. You can hatch eggs that you buy from the grocery store.

8/30. My mom successfully convinced me that gas pumps are voice automated when I was 10 (1994). It was my first time pumping gas and she said to put in $20 worth. I asked how to make it stop at 20 and she told me it was voice automated. NBD, I wait until it gets to about 15 and mutter "stop at 20." It keeps going full steam ahead and I started getting nervous. By the time it got to $19 I was screaming "STOP AT 20!" It slowed down (she had prepaid) and I thought I had succeeded... until I noticed everyone staring. She wouldn't even leave right away because she was laughing too hard to drive.

9/30. Former income tax commissioner of India, Vishwa Bandhu Gupta trying to convince people to stay away from cloud storage/computing. He firmly believes that cloud computing is about real clouds and that data can be lost if the cloud bursts into rain.

10/30. That a planetarium is a place where plants are grown. After arguing about it for a minute, this person said, "no, sorry--you're right. I was thinking of a plantatarium."

Read more on the next page!

11/30. An older cousin of mine tried to convince me that if our heads collided, and we didn't strike them again in a small time, horns would grow on our heads.

12/30. I knew a guy who tried to convince me of the hollow Earth theory. Basically that the Earth is hollow and that there is a whole race of subterranean humans, who branched from us thousands of years ago, living inside the Earth. And that he had been there and met them.

14/30. That the Holocaust didn't happen. Me and my friends tore him apart so viciously he came back the next day claiming he was joking the entire time. He wasn't.

15/30. Two of my friends were absolutely certain that West Virginia wasn't a state. They tried to convince me for like half an hour before I pulled out a map, and even then they weren't sure I was right.
thewintersgo

17/30. My parents told me there was a guy who lived in the North Pole who delivered presents to every child in the world on one night. For free.

If you think I was stupid to believe that let me tell you about this creepy-as-f*ck fairy that collects baby teeth.

18/30. That human blood is blue until it comes into contact with oxygen.
Mostly_Invisible_Man

20/30. My identical twin brother tried to convince me that I was adopted.
McFu124

22/30. I was driving in the country when we drove over "buzz strips" before a stop sign. One girl I was in the car with asked what those were there for. The other girl quickly replied, "So that blind people know when to stop."
colechampagne

23/30. My husband (in cahoots with my grandmother) tried to convince me that Marshmallows grew in bushes, kinda like cotton.
g33kch1c

24/30. When I was a kid I loved documentaries. One day my Dad tried to convince me the old man on the table next to us in a restaurant was David Attenborough (famous wildlife documentary maker from BBC / Discovery).

When my Dad turned back, he saw me at the old man's table apparently quizzing him on parrots. I made a scene as Dad dragged me away, apologizing profusely to the very confused old man.
Farhad Meher-Homji

A salesgirl once tried to coax a customer into buying an anti-ageing cream or something like that, which supposedly works wonders. When questioned by the customer on what was so special about the product, she replied that the cream permeates the skin, much further down into the genes (um, I think she thought genes are like bones) and changes the DNA to stop ageing.

26/30. Unbeknownst to my brother and me, my father hated whole wheat bread. One time when we were both around seven years old, my mother served slices of whole wheat bread at dinner. When she stepped back into the kitchen to bring out the main course, our dad told us quietly that the bread was dark because it had been dragged through the dirt.

My first actual taste of whole wheat bread wasn't until college. Turns out it is not as literally as earthy as dad made it out to be. Oh, you crafty man.

27/30. That the Hazard light indicator was the button for the ejection seat.

28/30. When I was a kid, mom would try to convince me that if you watch TV from too close, the person in the TV would suddenly grab you and take you inside for eternity.

29/30. My boyfriend still insists that the grease stain on the carpet in the living room came from the old lady that lived there before us dying on that spot. He has a whole story about it. He goes into great detail about how her decomposition fluids drained onto the floor and no one found her for weeks and weeks because she was lonely and had no friends.
W***e_Bag

30/30. When I was young my half-sister convinced me that she found and nursed back to health a lost grizzly bear cub (while staying with her father in Montana) and when the mother grizzly bear found them she kissed my sister on the forehead in thanks. Shut up, I was four!