People Confess What They Absolutely Regret Finding Out

People Describe The Best Ways To Get Under A Narcissist's Skin

People Share Their Most Compelling "Would You Rather" Questions 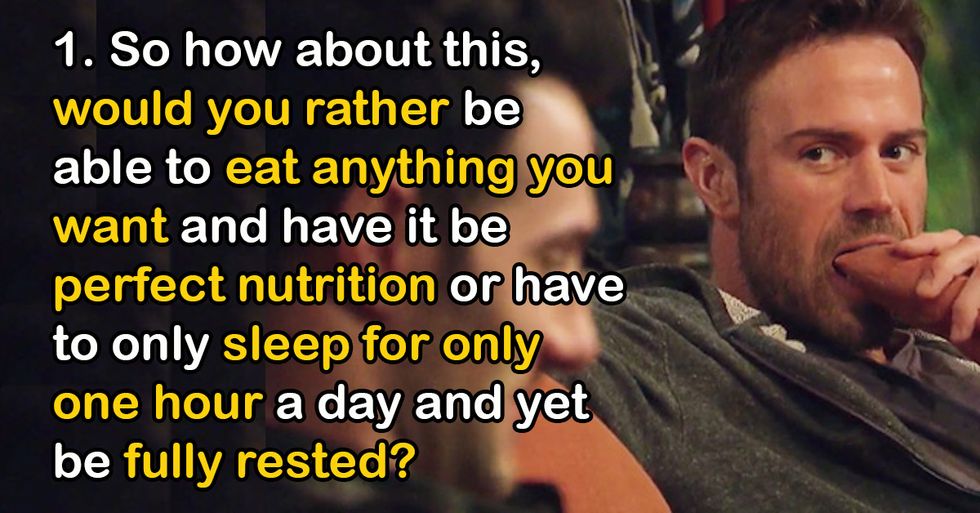 People Share Their Most Compelling "Would You Rather" Questions

You mean like... The Magic School Bus? That. That wins.

Definitely love - good thing I have a magic teleporting van.

My magic van can take me anywhere, down to the abyss I go. I'll pick up trash as a bonus.

Horizontal, for the exercise and less obstructed views of shankings.

I'd rather speak all the human languages, and I'd demand to be called 3PO.

I'd take the one hour of sleep. There's a whole world out there.

The second one. Sometimes you have to nope tf out.

Jurassic Park, of course - think of the scientific benefits.

This is a tough one. Scientific master or master musician? Science and math could yield perfect music (EDM obviously).

"Heroes get remembered, but legends never die." - The Sandlot

Lose the height, keep the abs.

Who needs knees when there are scooters? Elephants seem to do fine sans-knees.

Lights on, spiders aren't so bad. They eat mosquitoes.

Can't go wrong either way on this one, cuz I'm an All Star.

With my magic van, I can do both.

People Describe The Best Ways To Get Under A Narcissist's Skin

Which is rather ironic, considering narcissists believe they are simply the be all and end all, that everyone wants them or wants to be them.

Yet spending extended periods of time with people who are so egregiously obsessed with themselves can be simply exhausting, as they frequently find a way of veering the conversation back to themselves.

Making it all the more tempting to give them a taste of their own medicine, and find a way to annoy them.

With more and more unfortunate stories about misconduct in the news, there is an understandably low opinion of police officers in the United States.

Though we should always remember that the corrupt or ill-suited cops we read about in the news do not represent all police officers.

For law enforcement is by all means necessary, and can be an extremely taxing job, both physically and emotionally.

With many police officers coming in contact with people who have gone through experiences no one deserves to go through.

People Break Down The Most Annoying Fan Bases

The term "fan" is believed to be derived from "fanatic" or "fanatical.

Meaning "a person filled with excessive and single-minded zeal".

Indeed, some fans simply can't hide their excitement for their favorite franchises, sports teams, recording artists, or political figures, no matter how hard they try.

Resulting in the birth of such monikers as "Trekkies", "Beliebers", or "Cumberb*tches."

And while these passionate, some might say obsessive, fan bases often find compatriots at conventions, premieres and meet-ups, those unfamiliar with the apples of their respective eyes might be confused by their level of fandom, if not down right annoyed.

People Share Subtle Signs That Someone Isn't A Good Person

Usually when we meet someone for the first time whether at a social function, at work, or randomly in public, we generally have a good Spidey sense about the type of person they are.

Even with alcohol in the mix, our instincts can be dulled but we still continue engaging with someone who seems outgoing and friendly enough at the bar.

But we also have the ability to tell right away if that person doesn't have good intentions.