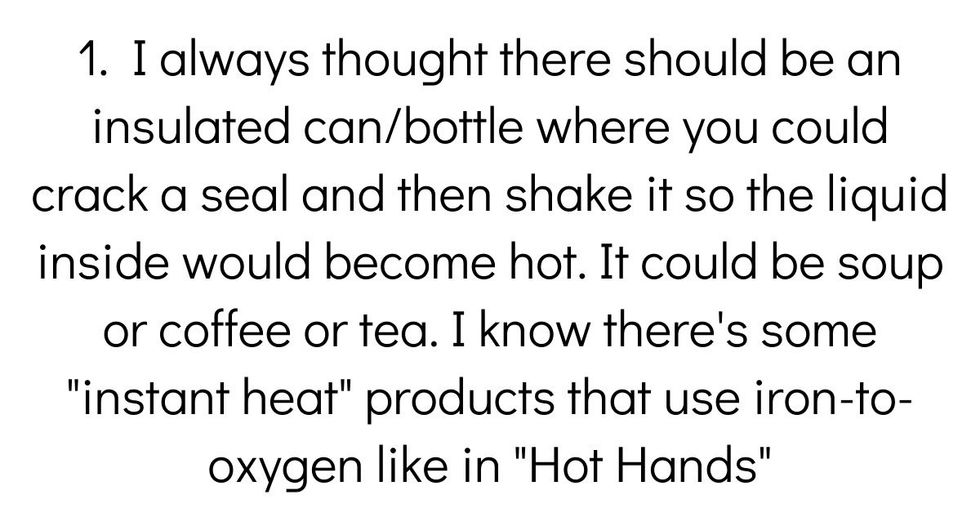 People Share Their 'Million Dollar Idea' That They Can't Quite Launch

As an entrepreneur, finding that one million dollar idea is hard to come by. And once you have it, it takes a lot of convincing to get other people to see it the way you do. Here are some of the best of those, courtesy of Reddit. Don't steal any of them- they'll know where you got it from and we don't want that on us.

u/iclaimignorance asked: What's your million dollar idea that you wish someone else would make happen because it never will if left up to you?

Car Gnomes. It's just an overnight mechanic service that picks up your car while you sleep, changes the oil and whatever else, then has it back in your driveway in time for you to go to work in the morning.

Organic peanut butter is everything.

Have you ever bought fancy peanut butter? The kind where the oil separates and needs to be stirred. I would like to put 16oz of premium peanut butter in a 20oz jar so I could stir the f*cking sh*t without splashing oil all outside the jar and on the counter.

However this will never ever work because of the a**holes who complain about air in chip bags. "Haha! What a rip-off! This jar isn't even full, how stupid do they think I am?"

YES YES YES TO THIS.

I just want to read books and accumulate more points than my friends yo.

Edit: for those of you thinking this is about reading faster, it's not.

AR was a program where you would read a book and take a test on it and get points according to how well you did on the test. At the end of the school year the kids with the most points would get prizes and a pizza party (at my school anyway)

A lot of people hated it because some teacher required it, but after a certain grade it became optional for me so it was super fun to compete every year with the entire school, on my own time.

I always thought there should be an insulated can/bottle where you could crack a seal and then shake it so the liquid inside would become hot. It could be soup or coffee or tea. I know there's some "instant heat" products that use iron-to-oxygen like in "Hot Hands" and those heaters in MRE's but I've never seen what I'm thinking of.

edit: Just to clarify, there would an outside insulated container, then a thin layer full of some heating element that's activated by oxygen, then the final product in the middle that would be warmed/heated.

I think it's a neat idea but it would also be fairly wasteful.

A shower that once you feel you're clean enough, you press a button or something and it starts functioning like a fountain and recycling the water all the time you want so you can relax in the shower under the hot water for long periods of time without wasting large amounts of water.

An allergen indicator strip/stick for food, so people with food allergies can double check their food when eating out at restaurants.

It exists for certain foods, I read about it for gluten specifically but they said they had more in the works. The downside is that it cost about $10-$15 per test.

A movie production studio tycoon game. You get to hire actors, writers, schmooze with producers, purchase props and build sets, let the film be recorded then edit the hilarious results. Once it's finished you release it and hope it doesn't bomb in the theaters. It'd be fun if there was time progression, too, so you start in the 1890's making silent films and work your way up to modern cinema.

A cat bed built to fit over a Roomba.

This is actually one of the few ideas here that's just dumb enough to work. Audience: people with robotic vacuums and cats. Quirky enough that people would buy it just to post the videos of their cats sitting on the bed as they get chauffeuered around the room. How do we make this?

A computer operating system or a Windows skin for elderly people that completely simplifies using a computer.

They'd get a ton of business.

Cold and flu pack delivery service, specifically on college campuses. Imagine hitting a few buttons and someone will deliver hot soup, tissues, and DayQuil for when you're feeling disgusting.