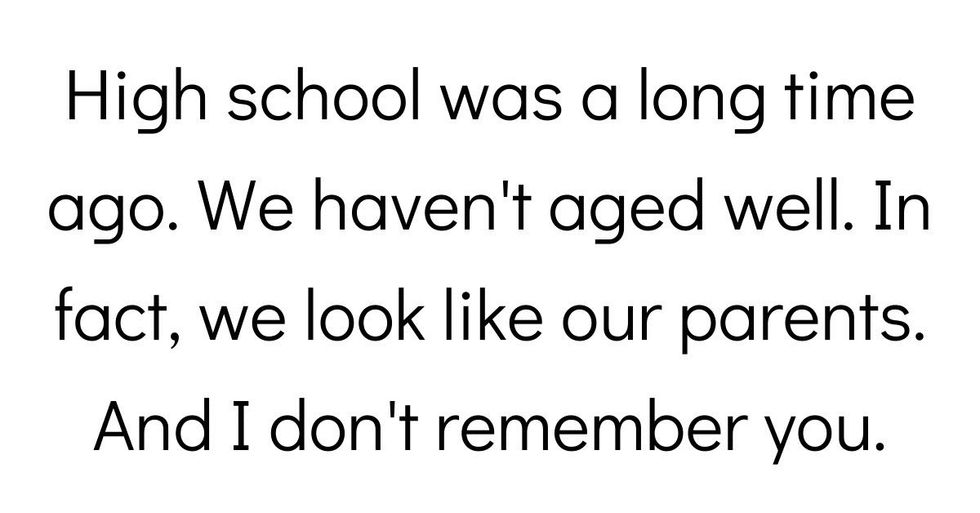 Sometimes, all people need is a good wake-up call. Certain things just need to be heard in order to grow into better people, even if it doesn't compute at first. These Redditors will tell you exactly what you've been avoiding. Buckle up.

u/Alaskan_Lost asked: What is something most people need to hear but no one has the guts to tell people?

High school was a long time ago. We haven't aged well. In fact, we look like our parents. And I don't remember you.

I'm 23 and I already forgot most of the people.

Some people aren't fit to be parents.

Just started working at a daycare a couple weeks ago and yeah... it's really heartbreaking watching sh*tty parents ruin a good kid.

Stop looking at your phone while driving.

It's probably because I told them go f yourself.

They're both very dangerous. A phone can suck you in with it's content, you forget you're driving. And your face is supposed to be pointed at the road, either way. There is no excuse for drunk driving or using your phone. People think they have control over their actions until they don't. But then it's too late.

Being hit by a car hurts so much, you cannot even begin to imagine. And the psychological trauma is something that sticks for years and years and ruins your everyday life. Nobody should need to have therapy because some moron hit them with a car!!

And killing somebody because you couldn't leave your phone for a second? Good luck living with that on your conscience for the rest of your miserable life.

Sometimes, it is you and not them

My ex-sister in law was b*tching for the 1,000th time about how everyone she worked with sucked, this person was awful, that person was the worst, yadda yadda. I'd finally had enough and said, "Michelle, there is one constant in this equation, this is a literal you problem". Last time I spoke to her, haaaaaaa.

Learned this the hard way.

Not everyone wants to be your friend. Nice does not mean loyalty. This goes double for coworkers.

Best way I heard this was, "You could be the juiciest peach ever created, but some people just don't like peaches."

Imma cut you off right there.

Shut up and let people finish their sentences. Stop interrupting.

There is only one occasion it's ok to interrupt someone. And that's when that someone is a conversation dominator who literally will not stop the flow of words from their mouth to let anyone else participate. Especially when in a group setting.

I have a friend who does this, and if we don't interrupt her then it becomes a never ending reel of just her voice all night, and she expects everyone to listen. Yeah, no thanks, ima cut you off right there and see how everyone else is doing!

More people need to realize this.

"No." Some people are socially anxious and can be extremely compliant. Saying no won't hurt someones feelings most of the time.

The guy at the sandwich shop I went to asked me if I would get an uber (from my account) for his friend who looked like he was from the Hills Have Eyes. I said "No" and the a-hole didn't put the peppers on my sandwich.