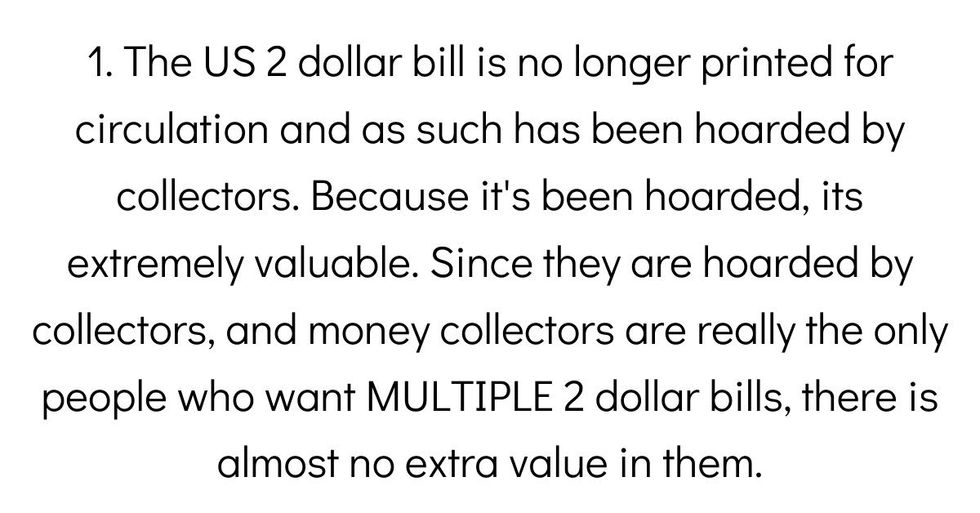 Seriously. It's True. People are saying so....

Sometimes its in the delivery of the syntax. Or sometimes its just the words. When we hear certain old adages or news posts we tend to believe it. The truth of the matter is is that the truth is only told half of the time... if that! We have been sold so many falsehoods through life it is difficult to keep up sometimes. "I could've sworn that was true. It sounds like it." We need to have higher standards and get to fact checking.

Redditor u/JimTehHedgehog wanted to discuss facts about facts and fiction by asking what we've believed....

What fact sounds legit but is actually fake?

"If the earth moved just 10 inches, then we would all be dead." Parakeet63

It varies by like 2 million miles. Inches? Ha! Disposedofhero

Hair grows back stronger after being razored off. fake_applause

I was told this for so long. A 12 year old has the sense to see that the stubble that occurs after shaving just feels and looks more coarse because of the blunt ends. And I was taught this by every female role model like it was the gospel truth. Fantastic-Mrs-Fox

My most embarrassing life story involves me getting a gumball machine for Christmas when I was 6 or 7, and essentially eating the entire machine worth of gumballs in a single day, leading to a rockhard, butt-busting solid gum turd that scarred me emotionally for years. Swallow that one piece and live your best life though y'all.

Edit: thanks for the platinum for sharing my childhood cautionary tale, I feel so redeemed after 30 years of shame haha. meghankerry

Caffeine can stunt your growth.

Caffeine doesn't stunt your growth! It's been scientifically proven that an average dose of caffeine has no affect on your height. Caffeine does not affect growth hormones unless it is in absurd amounts. Like 35 cups of straight caffeine, not 2 cups of coffee and a Mountain Dew.

Edit: Heck this blew up! Also I don't have citations, but I did a school project on this topic. Thanks for the award :). TitaniumGhostMaster

Not a fact. However, "sweating like a pig" is a phrase often used, and seldom do pigs sweat. They're always rolling around in the mud to keep cool. penguin-jesus

You eat 8 spiders per year while sleeping or whatever. OldPepper12

"average person eats 8 spiders a year" factoid actually just statistical error. average person eats 0 spiders per year. Spiders Georg, who lives in cave & eats over 10,000 each day, is an outlier and should not have been counted. HandLion

That popping/crunching joints on your hands will give you arthritis. It's not true. KiokoMisaki

It's the synovial fluid being moved around the joint and displacing gas bubbles.

Which is why you can't pop the same knuckle twice in a row very easily. You have to wait for the gas to move back into the joint to be able to displace it again. Littlebrin

'If you tell me, I won't get mad." Thatlamereddituser

I've been in both situations.

Roman people would use bird poop to dye their hair (true). The birds used to produce the poop were actually somewhat expensive to keep, it wasn't just random chickens. It got so popular that opportunistic people would mix together things that looked like the bird poop to sell, and ended up using fats (for texture and consistency) and lye (for color). This counterfeit poop ended up being more popular in the long run thanks to it's cleaning effects. Hence, sham-poo. Reverse_Waterfall

This nugget of false wisdom originates with WWII Allied propaganda and its efforts to conceal a technology from the Nazis.

One of the ways the British defended against bombing raids was by holding blackouts to make it harder for incoming planes to find their targets.

At the same time the Allies were curiously good at shooting down German planes despite the blackouts. This needed a cover story because it's (incoming pun warning) blindingly obvious that small mobile aircraft are slightly harder targets at than large stationary factories and cities.

Hence the explanation that defensive gunners were supplied with a diet high in vitamin A to promote good night vision. Hence carrots.

It's true that vitamin A deficiency can contribute to vision loss. The public garbled this into a notion that excess vitamin A intake imparts super-vision. Actually what adequate Vitamin A mostly does is prevent the cornea from excessive dryness (which can be one cause of clouded vision).

The myth about carrots persisted in popular culture long after radar stopped being a classified technology.

"If you tell me the truth you won't get in trouble"

-A cop, to 16 year old me. wednesdaythecat

The US 2 dollar bill is no longer printed for circulation and as such has been hoarded by collectors. Because it's been hoarded, its extremely valuable.

2 dollar bills are still being printed, though none will be printed in 2020 because there is enough supply of them to meet what little demand there is. Since they are hoarded by collectors, and money collectors are really the only people who want MULTIPLE 2 dollar bills, there is almost no extra value in them.

Basically, anyone who wants 2 dollar bills has a stockpile of them already and anyone who wants one and doesn't have one can easily get one from a collector or even your local bank. Since no extra value exists in them over their 2 dollar face value, many hoarders are willing to part with a bill or two. cabavion92

NASA spent millions of dollars on a pen that could work in space, while the Russians just used a pencil.

They didn't spend the money developing the pen (Fisher did, and then approached NASA). novayamodel

Also they wanted a pen stead of a pencil so there was less chance of graphite breaking off and getting into the electronics. Selfaware-potato

"Carbon Monoxide is heavier than air, so put your detectors close to the floor. The first people to die of CO poisoning are the ones lying down."

REALITY: CO is about the same density as air (in fact it is actually slightly lighter than air), so it doesn't matter where you put your detectors. This myth likely started because CO fatalities are most likely to occur while people are sleeping because they are not aware of the symptoms of poisoning (ie dizziness, nausea, etc) vs. those who are awake. goodluck_canuck

"My girlfriend goes to another school." DefinetlyARealPerson

But my high school boyfriend really did go to a different school! Fortunately he came around to my school enough that people saw him, plus my friends knew him. He was hot too. shinygreensuit

Your eyes don't grow (this is fake). They do actually grow but they grow very slowly (like REALLY slowly)

On the US interstate system it was designed so that at least one mile in every 5 miles was straight so that it could be used as a runway by the military in case of war. This was done to appease certain politicians that opposed the massive spending on the interstate project. diiejso

If a baby bird falls out of a tree, touching it will make it smell human and cause the mum to abandon it. Not true. ridgeydidged

The problem is that some birds and most rabbits just aren't great parents. It might not be because of smell or any one thing, but doesn't take a whole lot to spook a mother rabbit or bird away from their nest long enough to kill the babies. It's a quantity vs quality issue. Ragidandy

People Break Down The Best Low-Paid Job They've Ever Had

Low income jobs might be looked down on for their perceived position in society. However, only the uninformed think there's nothing to be gained from this level of work. In fact, these jobs can teach you valuable lessons for life, as demonstrated by these people's experiences.

Picture the most fun thing you could ever imagine doing.

Maybe it's an enviable career path that has always felt inaccessible. Or perhaps it's some kind of social activity that feels more elite than you'll ever be.

Keep reading... Show less
fun
You May Also Like
Trending

People Who Have Stumbled Across A Dead Body Share Their Story