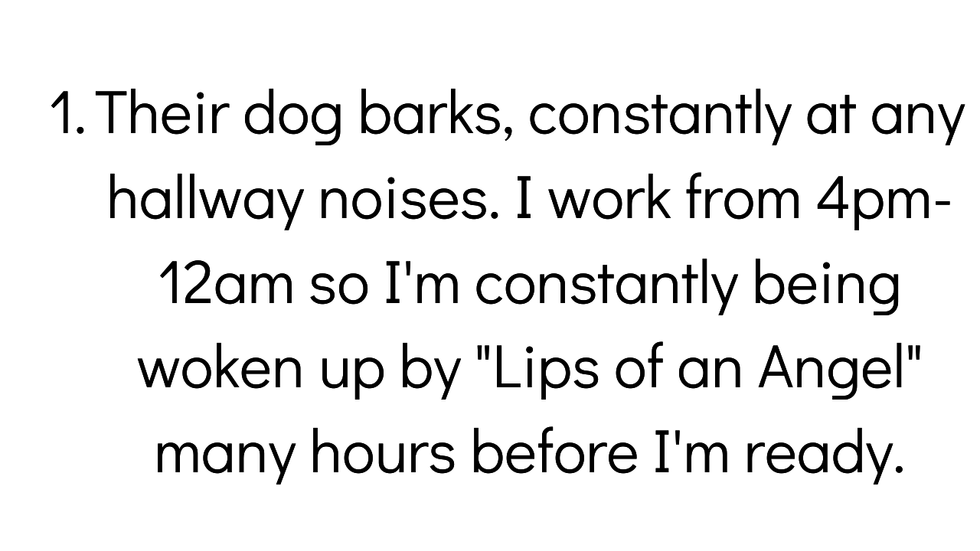 People Explain Why They Absolutely Hate Their Neighbors

There's nothing worse than having to live next door to someone you can't stand. It disrupts your life every day, and makes your home feel unsafe and stressful. There are many reasons why someone may hate their neighbors. Here are a few examples, courtesy of Reddit.

u/johnnewburg asked: What do you hate about your neighbors?

That must be so loud.

My neighbors living room wall is also the wall to my bedroom. Their TV and speakers are against this wall.

They listen to a lot of Hinder, Buckcherry, 3 Doors Down, and country music. Their dog barks, constantly at any hallway noises. I work from 4pm-12am so I'm constantly being woken up by "Lips of an Angel" many hours before I'm ready.

My previous next door neighbor and her bf were constantly banging. Like constantly. The guy must have had the greatest stamina in existence and the girl was a screamer.

Should have started cheering them on and making moaning sounds. They would have either got embarrassed and stopped or invited you over, either way it's a win.

My neighbors have a dog (not the problem) and about once a month they chop up an entire sheep head and feed it to their pug. This takes about 6 hours and they constantly scream at each other.

About a day later we find pieces of a sheep skull in our back yard, which were carried there by birds.

Most days, for literally 6 hours at a time, it sounds like they are stomping in circles. As a grad student who is at home a lot working, this drove me crazy because it shakes the walls and I couldn't fathom what the hell they were doing for that long. It made no sense until I recently Facebook creeped one of them and found out she did rhythmic meditative dancing??? Sweet.

The guy works at 5 am, and he stomps around up there from the hours of 3am - 5am.

1am - 3am is their designated sex time, and their bedroom is above mine.

They also have a dog that barks all day when they aren't home. I assume the one that does rhythmic dancing for a living is home a lot, so thankfully this doesn't happen that often. I kept track last weekend, that dog barked nonstop from 9am - 6pm when their friend came to feed it. After their friend left, it kept barking until 10pm.

I wish I was joking. I'd leave but the rent is so cheap.

That last sentence, though.

We live in a small neighborhood of only 10 houses. Everyone has 1-3 acres, so it's not like we're super-close. There's an elderly neighbor named Chuck who lives at the end of the street, in the cul-de-sac. He's the typical rich, retired a**hole who constantly calls the police. Our neighbors were having a graduation party for their son who was going to medical school. These neighbors are the kindest people you'd ever meet (they plow all our driveways when it snows).

Our neighbors invite everyone on the street to the graduation party. They inform all of us that some guests will have to park on the street but they will be respectful. They even invite Chuck.

Of course Chuck doesn't show up to the party, but he does call the police because there's cars parked legally on the street in front of his mansion.

He got in a fight with another neighbor because he said their tiny mailbox blocked the view of his 7,000 sf mansion. The way the street is laid out, that's the only place you can put the mailbox. And of course he called the police about this too.

He's been struck by lightening twice, I'm hoping the 3rd time will be more productive.

They are from the city. They do not "get" the country.

They called in a "noise complaint" because my roosters were crowing at sunrise. What kind of a dandified f*ck calls in a noise complaint about roosters -- in the countryside???

It's like complaining to the mayor of NYC to stop the car noises.

One is a born again Christian, way too interested in what people are doing, and acts too forced-friendly. They all gossip. One goes through my trash.

Put cat or dog poop in your trash. No animals? Poop in your own trash.

My neighbors are snobs. To the point it borders on comedy. They've hosted an MSNBC commentator a couple of times for dinner, and I've never heard the end of it. It's like living next to Hyacinth Bucket.

My neighbor directly across the street from me is a single woman who lives alone. She doesn't have blinds or curtains and at night she walks around her house fully naked. I know she knows everyone can see her.

Noise complaints get thrown around a lot these days.

Nothing really, my neighbors don't really talk to me and that's how I like it.

Though the first weekend I moved in and had my housewarming party they tried to call the cops on a noise complaint. The cops didn't give a sh*t because A) we weren't being loud and B) it was like 8pm, way before noise complaints can actually be processed or what have you. The cop just said he was checking to make sure everything was fine and he left after like five minutes and said once it's past midnight we should try to keep it down.

Our neighbors stared out us through the windows the hole night, when we were on our porch. Every time I looked over, I'd see the curtains quickly close.

Luckily it hasn't been an issue since.

2 of my neighbours in 2015 started to assume each other were stealing each other's sh*t, so they both installed their own camera to face the storeroom that they share. It's still going on, I hate it. I would hear arguments here and there.

Most are retired and have all the time in the world to make their lawns and sidewalks look great. I don't get far behind because of the peer pressure but I'm usually the last one to mow or shovel or whatever.

Their dog mauled and and injured our brand new puppy. They haven't even bothered to say sorry. Oh also their house is infested with rats that somehow got into our house and one crawled on me in my sleep.

Neighbors would try to watch us when we'd workout in our backyard.

Neighbors were sketchy, would do sketchy things.

On the most beautiful and pleasant of evenings in the spring, summer and fall, they're always outside having a bonfire until midnight or later. Makes it utterly impossible to ever have the windows open to enjoy the evenings.

I love a good bonfire but not every. Single. Night.

P.S. I really do like our neighbors, it's just that I wish they'd cut back on the bonfires that fill my house with smoke if I have my windows open.