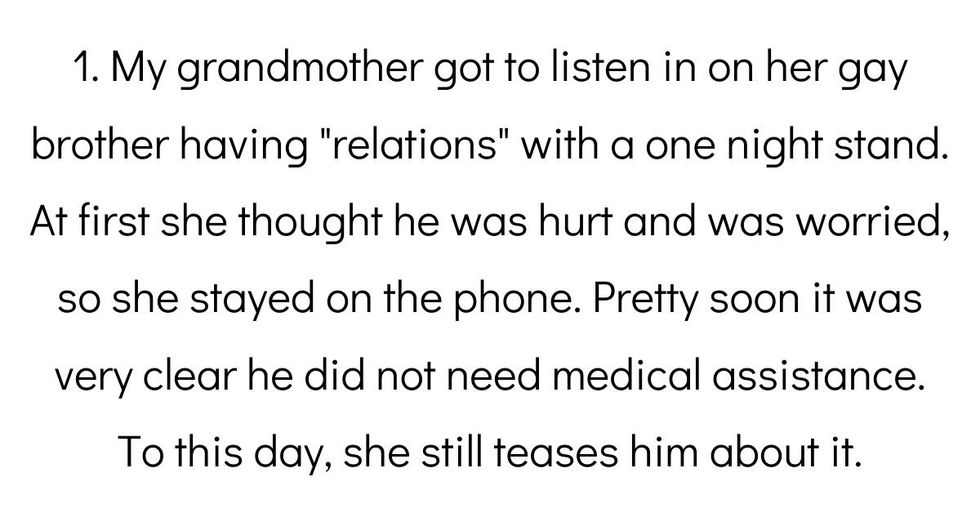 Have you guys ever butt dialed someone and had an "oh no" moment? I have. I once butt dialed my parents in the middle of ... um ... "fulfilling my marital duties" as ye old folk would say. Things. Got. Awkward.

Oh it's not just the outgoing awkward butt dials I've had brushes with, oh no.

I used to work for pretty much the worst boss ever. He was an unpleasant man with a loud violent streak and a well-documented but passionately-denied steroid and cosmetic surgery addiction. He owned a company that trained doctors in new procedures.

It was common for him to call us on weekends or well after hours to demand tasks be done immediately or that one of us deal with a "problem doctor" so that he didn't have to. We all learned pretty quickly that if we wanted actual weekends it was best not to answer the phone if he called.

So one Saturday, that's just what I did. I hit the little red X when he called and just kept going about my day. A few hours later I checked my voicemail to find he hadn't hung up when he thought he did.

... and that, my good readers, is how I found out what number nose he was on, exactly what kinds of drugs kept causing his nasal collapses and that his wife much preferred her first husband.

Redditors listening attentively to a "butt dial" phone call, what is the juiciest thing you have ever heard?

Buckle up, babies. You're in for a ride.

A woman butt dialed me at work. I now have a voicemail saved of that woman talking to her girlfriend about her boyfriend's farting behavior.

We Knew Who Got The Toys

This will be depressing

My father was cheating on mom with someone named amber. She had one son around the age of 10. I remember he accidentally called us and we listened carefully to everything.

He talked about Getting a PS3 (this happened a long time ago). Me and Brother listened getting excited. We thought it was for us. This wasn't around Christmas. We waited for him to come home and Nothing happened. We waited 3 days and no news.

While we were getting dropped off at school I found a Toys R Us ticket that had a PS3 , Headphones , Toy cars , and other stuff in them. I showed it to my dad and asked him "When are we getting this?"

He stayed silent. Not a word or even a sound.

We don't talk about this and avoid it. We knew who got the toys and It makes us think a lot.

I laugh about it now Since that Amber girl was cheating on my dad and using him for money.

My best friend's girlfriend butt dialed me a week before my birthday and I got to listen while he described to her (in no uncertain terms) that no matter what her jealousy issue was, he was buying me a huge expensive gift. Then started on a long list of all the times I had been there for him.

It's nice to know you're appreciated.

So Afraid To Die

My dad didn't hang up fast enough after I was calling him while having an anxiety attack. I heard him say to my stepmom "that girl's so afraid to die she's afraid to live."

On The Way To A Strip Club

I was in the other end of this once and accidentally butt dialed my wife while in the car, drunk and singing, on the way to a strip club. We were just dating at the time, but she knew about it.

She still plays it every once in a while to laugh at my awful singing.

I have a wholesome one!

After a first date with an old boyfriend, he picked up his friend and they drove me home together. When I got into the house I got a call from him. He had butt dialed me and was telling his best friend how amazing I was.

My grandmother got to listen in on her gay brother having "relations" with a one night stand. At first she thought he was hurt and was worried, so she stayed on the phone. Pretty soon it was very clear he did not need medical assistance.

To this day she still teases him about it.

I work as an emergency operator and all I can say is don't get freaky whilst wearing your Apple Watch 😋 It's happened more often than you'd think. Someone in the throws of passion can sound very similar to someone in distress.. Awkward for everyone involved lol.

Got a butt dial from a random number and I heard the person sneeze really loud. When I replied "gesundheit" I heard him go "Thanks" and then he actually freaked out because I guess he was alone. Bonus points if he worked in a funeral home

I used to hang around with a girl that was a bit... Clingy. One day I got butt dialed by her and all I hear is clothing rustling and some muffled voice speaking gibberish, then, some faint inhaling, and some more talking.

The inhaling became louder and ragged, I tried 3 or 4 times again and whoever it was hanged because they probably heard me.

Three months later, I find out she was keeping my used shirts and smelled them.

My uncle harshly trashing me to my grandmother and her quietly agreeing with him, right after they had both called to wish me happy birthday and compliment me on some professional success.

I hung up and laughed it off, but oh was it satisfying to know I'm not delusional and he does in fact take every excuse to hate on me. It's good to know where we stand...

Not exactly juicy, but my mom butt dialed me years ago when she and my dad were driving on vacation.

They're both gone now, but I still love listening to ten minutes of them talking to each other without knowing they were being heard. It's one of my most precious mementos of them.

Not me, but my best friend is a county officer who's raising his sister-in-law's kids because she's too far gone in addiction to be a fit mother. Insert many stories of her abusing and neglecting them and a boyfriend possibly molesting them.

She butt-dialed my friend one time and he listened and overheard her selling Xanax. Later that day she wanted to visit the kids, but he told her the visit was off and if she crossed his county line into his jurisdiction (she lives in a different county) he was going to have her stopped and searched. It was a while before she came around again.

Such An Eye Opener

My ex husband was at work and he called my cellphone to just say hi. After we said our goodbyes, he must have not hung up the receiver properly because I could still hear him and his coworker talking and laughing. He was calling me a bitch and how I can't leave him alone. We were having issues but I thought we were working on them. It was such an eye opener to hear him speak about me in such a negative way.

I called a friend and his butt answered the phone

I heard a man shouting "you think I'm dumb? I know what all that stuff is. You will go in. I promise!"

I just hang up and didn't think about it.

A few weeks later I asked him what that was I heard. He asked me what in talking about. I told him that I called and heard a guy yelling all that stuff. Then he realized he answered the phone by accident.

He was breaking into a house but got caught. Police chased him and arrested him. I called him when he was laying on the ground handcuffed, and the officer yelling at him.

I was hanging out with a co worker and his wife pocket dialed him.. When she was about to have sex with another guy. It was entertaining hearing her marriage imploding and my co worker seemed kinda relieved (like this was the easiest decision he'll ever make).

My boss one time butt dialed me and I was listening to his conversation with my Co worker, it sounded Ike they were super busy and looking for people to call in. Hes going down the list and gets to my name and my Co workers like "nah he said he had plans." and I'm just sitting there like, I said no such thing, and I'd be happy for the extra hours but it would be creepy to call and say I was listening to their conversation so I just let it go.

I butt dialed my mum whilst talking to my weed dealer. she grounded me.