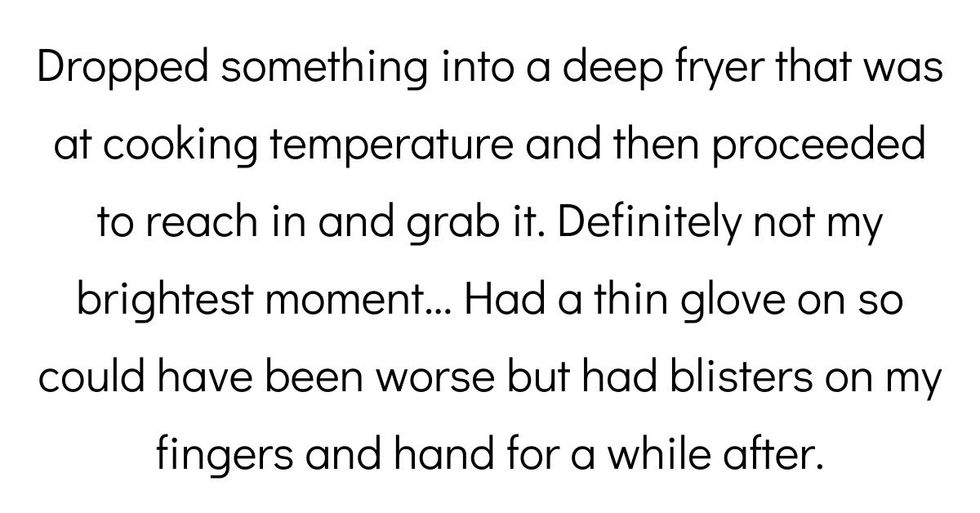 People Share Their 'Why The Hell Did I Do That' Moments

Listen, we've all had those brain fart moments where we do something so astronomically stupid that we wonder how we have survived as long as we have and if maybe we should have a chaperone since we clearly can't be trusted with out own well-being. No shame. No shade. Deep down inside, we are all really really dumb. Really.

So let's stop lying about it. Let's just put it all out there and talk about it. I'll go first. Hi, my name is Erica and I am a raging moron sometimes. So are these people.

Once I didn't feel like I could keep going with my job (I didn't feel comfortable there), I said f*ck this and yelled at my manager. Thing is I needed the job; family was going through a rough time.

Next day I showed up and my manager ringed me up, he told me he understood my frustration and recommended meditation, told me not to lash out on him again like that.

I still left a few months later, but I still feel mad respect for the guy after that.

A humidifier (ironic) was on, plugged in, and making weird noises because it was submerged in water.

My barely awake brain went "must unplug that" and I waded through the 4' of water to unplug it.

I was opening a can of food for my cat, and some of the gravy got on my finger. My brain went on autopilot and I licked my finger clean. I regretted it immediately.

When I was 10 I was on vacation and wanted to show off and run into a window and then slide down like those characters in cartoons do. I hit the window and it broke so I walked to the back of the building I broke the window of and I told the people I was running and didn't see the window. I wonder if they bought that.

My boyfriend left his phone at my apartment so I texted him to let him know.

I cracked my screen and took a screenshot to send to the dude I was dating. He responded: "Did you really just try to send me a screenshot of your cracked screen?!"

My daughter, who was five at the time, went into our (my wife and I's) bathroom and managed to lock herself in (the lock on the door is weird and problematic). She couldn't get out, so I had to call a locksmith. It took him a solid two hours to get her out of there. He finally gets it open, but at this point we're late for our dinner reservation with my wife's family, so we agree he'll come by later in the week to fix the lock. He tells me very clearly "Don't shut this door until I fix it. If you do, this will happen again." (I'm sure you can all guess where this is headed, and you're right).

The next day, home alone, I walk in there to take a leak and reflexively shut the door behind me. I spent about half an hour trying to get out before I finally called the locksmith. That convo went like this:

"Hey, uh, you were over at my place yesterday."

"Oh yeah, yeah, I remember! You're calling to schedule the follow-up?"

Guy was a real professional. Never before or since have I heard such polite astonishment packed into a three word question. He came over again, but obviously he had to charge us for it. Possibly the most expensive way I've ever embarrassed myself.

Out Of The Frying Pan...

Dropped something into a deep fryer that was at cooking temperature - and then proceeded to reach in and grab it. Definitely not my brightest moment...

Had a thin glove on so could have been worse but had blisters on my fingers and hand for a while after.

13 different types of alcohol in a matter of 3 hours. I was 21, had alcohol poisoning for 2 days. Surprised I didn't die. I dry heaved for over 24 hours. Think food poisoning, mixed with vertigo, and the flu. I legit thought I was going to die.

Back in college...I leave my third story apt to go play basketball with a friend and see my crush on the phone down on the first floor (outside). As I get to the second story I decide to throw the ball down and try to scare her. It doesn't work and she catches it on the first bounce.

That's when MY DUMBASS JUMPED OFF THE SECOND STORY in a pair of chuck converse sneakers like I was Spiderman.

I land flat footed and shattered both my heels and several bones in my feet. I was relegated to a pair of crutches which really sucked going up 3 stories everyday. Turns out me crawling into her apartment in searing pain didn't totally turn her off as that was 15 years ago and we've been married for 10 now. Till this day I think..."why tf did I do that?"

One time I was driving and I hit a tree. Not on the side of the road but in the middle. It was a clear, regular day. I could see the fallen tree from a distance. I definitely didn't want to hit the tree.

I'm still not sure how or why I did that.

My parents had me take a defensive driving course when I was just learning how to drive (not at all related to any of the required driving courses), and the big lesson that stuck with me from that course was "Look where you want to go".

My friend and I found an old dustbuster in his parents' garage, when we were in middle school. We were taking it apart and got to the battery pack with two wires coming out of it. I said we should each touch one of the wires to our tongues, then touch our fingers and see if we got a shock. My friend rejected my offer. So I put both wires on my tongue...

My body literally lifted off the ground like a cartoon character getting electrocuted. I think my legs straightened out instantly from a spasm or something, I'm not really sure what happened, but I jumped probably 6-12 inches off the ground and felt an intense shock throughput my entire body. First and last time I have been legit electrocuted. When I landed the thing dropped on the ground and the pain stopped, but I was stunned for a moment.

Looking back i have no idea what compelled me to do that. I guess I thought the battery was dead or something, and wouldn't have any effect. I probably could have died, not sure, but I stay the fuck away from electrical currents now.

I looked at a box cutter and thought, hmm this doesn't look that sharp.. So I proceeded to press it on my thumb... Well, it was sharp enough to cut my thumb at least 😂

I accidentally hugged a random guy in a restaurant. I thought he was my older brother who I was really close with at the time. Turns out he was a 50 something year old man who wasn't even the same race as me and my brother. I just judged by his coat that looked like my brother. He was laughing a lot, and a lot of people looked concerned. That was 2 years ago, and I still regret it. Hope that the random hug brightened up his day a bit though.

6th grade graduation ceremony. They were giving an award to some lady,for helping the school or something.

I was thinking about that scene from Mean Girls that spawned the infamous like "She doesn't even go here!"

I don't know wtf happened, but I SAID IT INSTEAD OF JUST THOUGHT ABOUT IT.

Everyone turned around. I did too trying to cover up that it was me.

Blowing on the ice cream

I was eating something saucy and a bit spilled on the end of my laptop's charging cable. I licked it off without thinking and zapped myself.

I had to be 12 or so when I did this. I was walking towards a road with a friend to cross it. A car was coming down the road.

My mind went "The car is fast enough that if it arrives at the point where I'm crossing over before I'm there, I don't need to slow down. Win time!"

I don't really know why it was important, but it was during my period where I was tried to be right about everything. Anyway, it seemed like it would be a very very close call, but my brain didn't stop so neither did my body.

I wanted to check my theory. Almost died.

I am in my 20's now and when Harry Potter first came out I was very young. I was a huge fan. Well I guess one day I got carried away because I ran into a wall at a train station like you have to to get on the train to Hogwarts. In front of my entire family. I hit the wall so hard that I got a bloody nose.

Most recent one was in my Cultural Anthropology class. We were on the topic of sexuality and gender, specifically trans individuals. The professor said that the term "transsexual" is offensive to some. So, thinking it would be funny, I asked, "Well what do you call them? Penis-enabled?"

Nobody thought it was funny and I came off as transphobic in a class full of easily offended people. Right before this I was working with an actively transitioning coworker, she's so funny and we talk like old friends about whatever. I told her about that later and she laughed her ass off, but the whole class took it so seriously.

Also we were looking at illustrated representations of ambiguous genitalia. I thought it would be funny to say "oh so it's a typical ~current day of the week~ for me..."

It was not funny. I dunno wtf is wrong with me.

Well I mistakenly added salt to flour when making pancakes this morning. Instead of throwing it all out and starting over I tried to "save" it by adding double the sugar.

You don't have to stick with mistakes.