People Break Down The Most Important Qualities Of A Good Driver

An Elderly Man Opened The Fridge. When He Found THIS Inside, He Called The Cops Right Away. 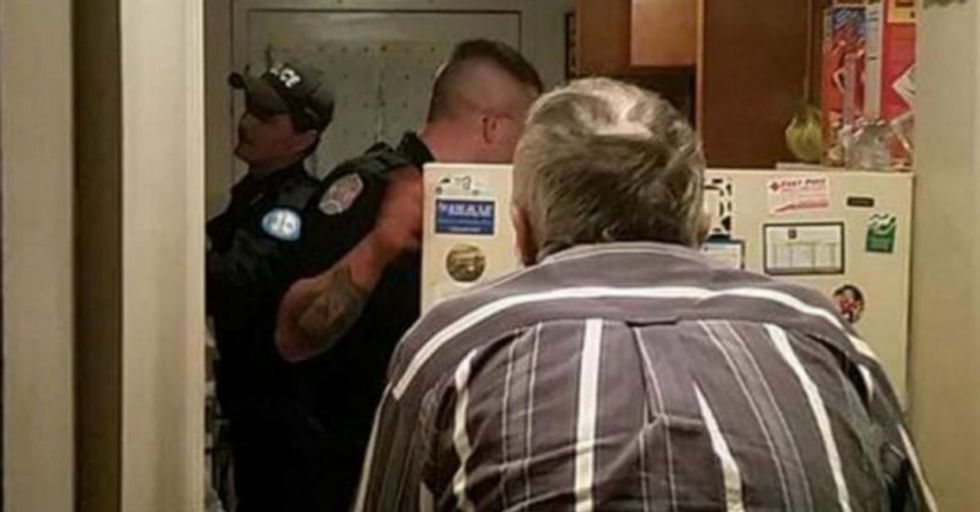 Oftentimes in life, things can get so chaotic and busy, it can be hard to find a single minute to yourself.

Still, when we can find those moments, a lot of us choose to turn our attention and spare time to helping the neediest people in our community, as we saw with the sweet police officer who bought groceries for a homeless family in desperate need of food.

Recently, a similar story has become circulating again on the web. It first took place back in January of 2016, but it bears repeating in these hot and hectic summer months.

A group of dedicated police officers in Tennessee made the news when they were caught in theheartwarming act of taking money out of their own pockets to help out an elderly man in their community.

There sweet gesture left thousands in awe, and serves as a constant reminder of how important it is to be in touch with your community!

Check out the gallery below to learn more about this incredible story!

It all started when a telephone call arrived to the police station from an elderly man in town.

In a tired, distressed voice, he asked for one simple request.

Could they please, he asked, bring some food to his apartment?

The elderly man lived in the quiet, bucolic city of Mount Pleasant, TN.

The well-named city is small, scenic, and historic, with just 5,000 people living in its limits.

The community, just outside of the border of Appalachia, is a close-knit kind of place, where people step up for one another and help out in a pinch.

This was no exception.

Upon further inquiry, the elderly man confessed to the dispatcher that he hadn't eaten anything in two days.

At 79 years old, he had been recently robbed. His former caretaker had allegedly taken his debit card, rendering him helpless no money, and in the depths of the deep winter.

Its not clear whether he had family in the area, or whether

Continue this story on the next page.

they had been equally trapped by the bad weather.

So the man called the only people he could think of: the police department. The local officers were more than happy to come to the rescue.

In addition to providing the communitys law enforcement, theyre involved in everything from supporting the high school sports teams to conducting campaigns against distracted driving.

As is the case in many small towns and cities, the police are familiar faces that can be relied on in a tight spot.

According to the Facebook page, Wayne County Now, The officers sprung into action. These officers bought the elderly man enough food to stock his pantry for a month.

The men in the group, identified as Officers Odom, Gray, Runion, and Bolton by News 2 Nashville, took $160 out of their own pockets, pooling it together to

help the elderly gentleman stock the cupboards for weeks to come.

And a good thing they swept in when they did, because a truly massive snowstorm struck just one weekend later.

Meanwhile, the officers of Mount Pleasant PD set out to help their new friend in more long-lasting ways.

They started a food pantry for canned goods to help needy residents.

They also tracked down the fraudulent caregiver, and arrested her for her crimes, renewing access to those bank accounts.

If these incredible police officers touched your heart, make sure to SHARE this story with friends and family!

We're all adults who are totally mature and don't, at all, giggle a little bit on the inside when someone talks about what conditions are like on Uranus.

Uranus is our favorite heavenly body.

People Break Down The Most Disgusting Bad Habits

As much as people try to put on a good face in public, many of them have idiosyncratic behavior–like involuntary foot-tapping–they are ashamed of having.

People have different levels of tolerance when it comes to profanity.

And some people can't stand the sound of rude or vulgar language so much that they can't bring themselves to say these naughty words themselves.

But when anyone reaches a high level of anger or frustration, they still might need a verbal outlet.

And instead find themselves coming up with an alternative word, which helps them release their anger, but won't offend any nearby ears.

Redditor No-Citron5628 was curious to hear people's favorite alternatives to curse words, leading them to ask:

"What is your best swear word alternative?"

People Share The Most Bada** Villain Quotes Of All-Time

When we think of iconic movie quotes, there are several which come instantly to mind.

"Love is never having to say you're sorry."

"I'm gonna make you an offer you can't refuse."

Appropriately, the ones that might haunt us the most, are those delivered by villains, who linger in our memories not only by their creepy attire and presence but by their devious choice of words.

Frightening us long after the credits stop rolling.

Redditor N_the_character was eager to hear what the Reddit community considered the best quotes from both Hollywood's legendary villains, as well as some lesser-known antagonists from film, TV, and video games, leading them to ask:

"What's the most bada** villain quote?"

"I should tell you that I have killed people smarter and younger than you."- S-Markt

"The Marines are righteous?"

"These terms have always changed throughout the course of history!"

"Those who stand at the top determine what's wrong and what's right!"

"This very place is neutral ground!"

"Justice will prevail, you say?"

"But of course it will!"

The Man with the Midas Touch...

"Goldfinger after Bond says 'Do you expect me to talk?'

"Azula: 'Don't flatter yourself. You were never even a player'."- herculesmeowlligan

"'Good Heavens, are you still trying to win?'"

“'You are not brave, you’ve merely forgotten the fear of death'."

"'Allow me to reacquaint you'.”- KentuckyBourbon94

The Good, the Bad, and the one-liners

"'A true victory is to make your enemy see they were wrong to oppose you in the first place'."

"'To force them to acknowledge your greatness'."

A true villain will have you quaking in your boots with just one look.

But it's with their words that they really get you.

And how they instantly go from being merely villains, to legends.