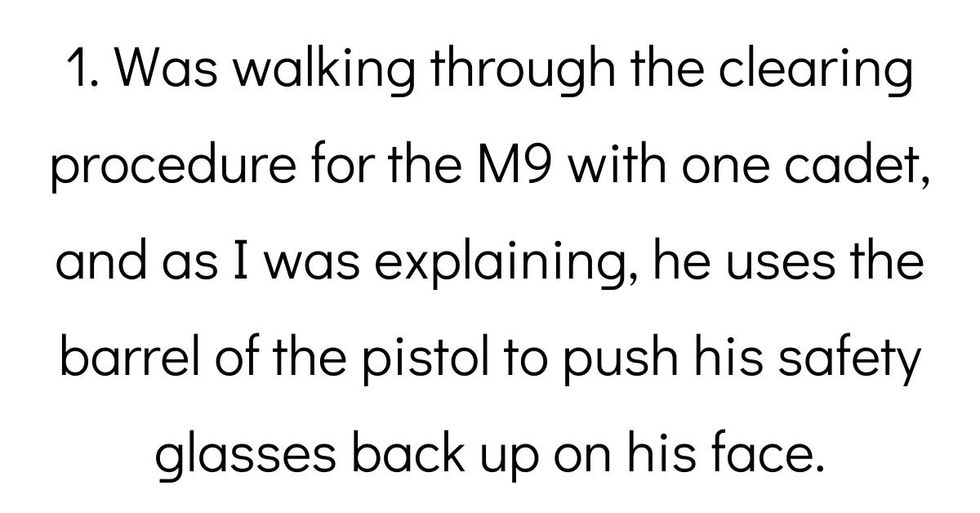 Work must become eventful pretty quick for those that work at a gun range. Between those huge ear muff things, abstract paper men being shot at, and the DEADLY FIREARMS, shooting range security guards likely live with their head on a swivel.

But some dinguses will inevitably fall through the cracks.

u/ZeXaLGames asked, "Security guards at shooting ranges, whats the dumbest shit you have seen people do?"

That's One Way to be Sure

I legitimately watched an instructor show some guys he was training how to unload, and to be sure it was unloaded correctly, then to demonstrate it was unloaded, he picked it up and pointed it at one of the students.

No Deaths, Up Top

And another time some douchebag was shooting a .50 BMG bolt action and purposefully trying to shoot above the berm in an attempt to knock a tree down. He put 5 rounds into a building 2 miles away and laughed when the RSO was notified and asked him about it. Literally high fived his friend.

I saw two guys throwing tennis balls into the air and trying to shoot them with large caliber rifles. They missed of course, god knows where the rounds went. They got kicked out when the guy throwing them ran into the firing range to retrieve them.

I once had the damn range safety officer tell me "i'm going to go change my targets, make sure you keep your shots away from the right side of the range"

Sorry, Had an Itch

Was walking through the clearing procedure for the M9 with one cadet, and as I was explaining, he uses the barrel of the pistol to push his safety glasses back up on his face.

A guy, an ex cop mind you, is doing the El Presidente drill. You spin, draw your pistol, and then work your way down the targets. Instead, he draws his gun before spinning. So when he spins he sweeps the entire crowd of students with his gun.

I watched someone load a shotgun and hold it with one hand, outward. I wasn't able to get to him in time before he shot it. Poor bastard

Didn't Think We Needed That On the Rule Board...

I once saw someone slap the teachers butt

My husband and I went to a shooting range and while my husband was shooting I saw a guy scratch the side of his head with the barrel of his gun and then continue shooting.

Maybe a Different Route Next Time

I notice some dirt tumbling down from the berm. Obviously I aim the rifle at what may have caused it. Just a middle aged woman walking her dog down the berm towards a couple of guys shooting. We obviously all called cold and dressed her down. She claimed ignorance that she had no idea that there was a gun club abutting her property. A gun club that shoots from sunrise-sunset every day but Christmas for the last 107 years.

Video Game Developers Divulge The Secrets All Gamers Should Know

People Break Down The Most Cringeworthy Thing They've Ever Experienced