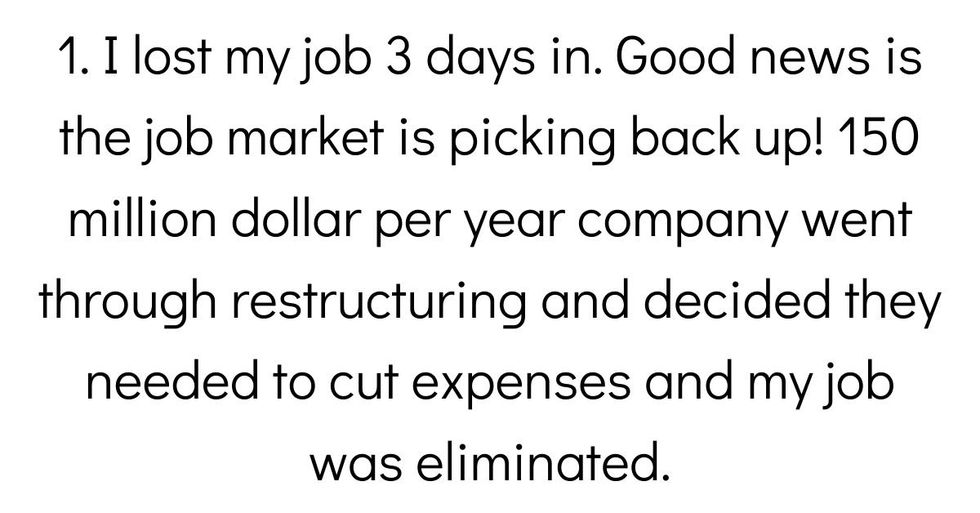 New year, new me! Time to keep up with those resolutions and make this year YOUR year! That is, unless you've already messed up. Resolutions are meant to be broken, right? Oh well, maybe 2021 will be your year instead. Here are some of the best f*ck-ups of this year, courtesy of Reddit.

u/RandomnessInc asked: How did you already f*ck up 2020?

I lost my job 3 days in. Good news is the job market is picking back up!

150 million dollar per year company went through restructuring and decided they needed to cut expenses and my job was eliminated.

Provides some peace of mind that it wasn't based on performance but still doesn't take the sting away, especially with a family to feed!

I let the woman I like lose her interest in me...

That's not on you, that's on them. Don't self reflect negatively just because of someone else's validation. There are so many out there who would like you for you.

My resolution was 52 books in 52 weeks. I'm halfway through book 1.

I don't know if I could do a book a week, so good on you.

I tend to put myself at a page a minute for enjoyable reading (if my mind doesn't wander) and much longer for textbooks so I think it might have to be dirty limericks for most of the reading list if I wanted to make 52 in a year.

That's not your fault.

My uncle died to blood cancer.

Damn, that sucks. You and your family have my best wishes.

Spent $50 promoting a tweet. Yeah, that was pretty useless.

Unless you're a big brand, promoting sh*t on social media is pretty much useless. Unless you just want Likes, which are also worthless if you haven't figured that out yet.

Possibly getting evicted for being 4 days late on my rent. NEVER been late before. I have 2 small kids.

That's sh*tty of the boss.

I got fired just before Christmas for something out of my control (work truck +summer tires +freezing rain =ditch) but my boss said he'd give me a good reference, applied to a new job. Turns out, not a good reference.

Meanwhile, wife just got pregnant with our first (thinking I had a stable job) bought a new car. So since Jan 1, bought a new car, found out I'm gonna be a dad and used a sh*tty reference to destroy a new job opportunity.

Screwed up my exams and I'm behind on submitting two projects.

Got in a bit of a depression hole after some rough news and didn't stick to my training program for the race I'm running in April the first few days of the month. Felt like I'd made a New Years resolution and failed to keep it. Was extremely tempted to give up altogether, and managed not to; I've made it to HIIT cross training for the past two days and exceeded my goals!

Wanted to replace my Phone battery. In the process of opening the back with a heat gun I accidentally cut the wire to the side buttons. 400€ mistake :(

The family dog was put to sleep due to age-related health issues (she was 12 years old, which is a good age for a Great Pyrenees). I've been falling on old destructive patterns instead of letting myself grieve.

The anxiety and fear of failing classes causing me to have multiple panic attacks during said classes which put me behind in the class. A horrible cycle. I can only pray for everything to work out and for me to do well.

The kitty makes up for it.

Broke a laptop charger, cried 17 times already, lost a weeks worth of a Geometry dash level.

But I got a kitten and his name is Hux and he is very cute so all is good.

My brother just recovered from breaking his arm in October. He played football and split his knee cap in half. He had surgery yesterday and he's been in the hospital for 5 days now.

He lasted one week into 2020 and crippled himself for the next 4 months.