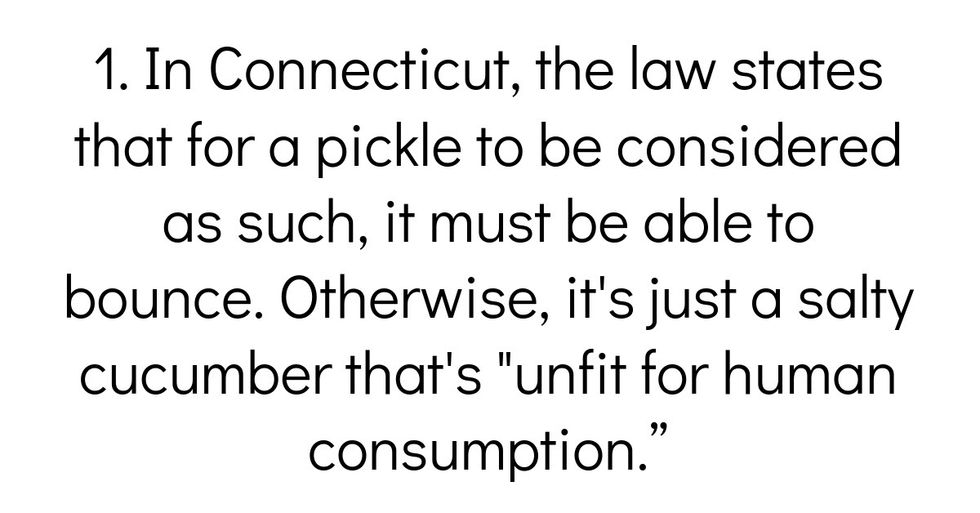 People Share The Dumbest Laws That Exist In Their Country

Our society might tell us to follow laws that we don't necessarily agree with. While we could delve into all the messed up rules and regulations on the books, there are some out there that are so ridiculous that it's amazing someone had the audacity to think them up.

Redditor MaxienLai is responsible for today's burning question: "What are some of the dumbest laws that exists in your country?"

One lemonade company had to up the sugar in one of their products, cause it was called "Die Limo" (german word for lemonade) and in order to call something "lemonade" in Germany you have to have at least a certain percent of sugar in it. German logic at its finest.

In Montreal, Canada, there's a municipal regulation that says you can't build or store a nuclear weapon within city limits. The fine is $100.

Not so much a single law as the unintended effects of how two laws interact.

In Pennsylvania, there's a state law that you can't buy a car on Sunday.

Also, it's illegal to sleep on top of a refrigerator at night.

Not passed yet, but in order to reduce the consumption of beer, some lawmakers want to make it illegal for the sale of COLD BEER in MEXICO CITY.

I can enlist, train, and see combat in the armed forces, fly home and still not be old enough to legally have a beer while talking about it.

"Dressing up like a member of the armed forces..."

Dressing up like a member of the armed forces is illegal and punished by a 0.28$ in today's money fine, however soldiers take it to mean that wearing camouflage is illegal which they use as an excuse to beat up civilians.

In the Netherlands it's forbidden to insult a foreign head of state. The only exception is if we are at war with that nation. The only foreign leader assholy enough to charge someone over this law was Erdogan.

In Connecticut, the law states that for a pickle to be considered as such, it must be able to bounce.

Otherwise, it's just a salty cucumber that's "unfit for human consumption." Thanks CT!

The "cannot collect rainwater" laws baffle me. I know it's a thing here in Canada, probable elsewhere?

Civilians cannot wear camo patterns in Barbados. Even if it's pink camo it's illegal and the police can request that you take off the offending garment. If customs find camo clothes in you belongings when you enter the country they will confiscate it.

Oh there are a BUNCH of super dumb laws in the US, and in specific states:

California: It is a $500 fine to detonate a nuclear device

Hawaii: it is illegal to stick a penny in your ear.

Alabama: Sticking an ice cream cone in your back pocket is illegal.

The entire USA: You can vote, join the army, and are required to pay your taxes when you turn 18. You are not allowed to drink, rent a car, purchase a pistol (or rifle in certain states), or in some states, smoke, for another three years.

Also the entire USA: Except for Maryland and California, it is legal to own and use a flamethrower. There is no background check for this.

California YET AGAIN: It is illegal to attempt to ride a bicycle underwater.

The Entire USA: The National Firearms act has very specific requirements for what is considered an "NFA" firearm that requires a tax stamp. Here's a helpful guide

In Korea, the libel laws are so broad that you can be sued for telling the truth, even if you have demonstrable proof that you are telling the truth. The only way to get out of this is if you can prove that your telling of the truth is "for the good of the country".

I'm not Korean, but I live here, and I can tell you the most common way this affects the non-Korean community is when we are looking for jobs. We will get approached by a company, and start asking around in online forums to see if anyone has worked there before and if they have a good reputation.

No one will ever respond, because... well, if you are found to have ever said anything bad about a company, no matter how much proof you have of it, they will sue you for defamation.

There are also cases where rapists (yes, actual rapists) have sued their victims for naming them because it "defames" them. This has actually been a factor in the Korean MeToo movement, because victims cannot name their abusers or harassers without threat of being sued (which is something that has happened).

DQ: What's the dumbest law on the books in your area?