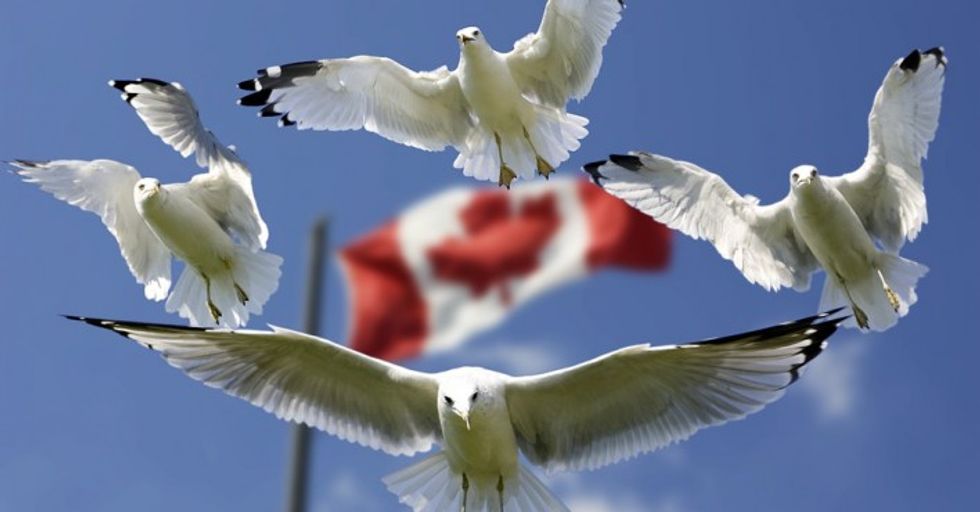 4. Canadians do not find, "Say 'eh' for me," to be particularly funny.

5. Canada has rednecks, too.

6. We're a lot bigger than you, in land mass, but our population is considerably less. The populations of Los Angeles and New York City would be around 30 million people. The entire nation of Canada has around 32 million people. Due to the fact that most of our country is in the northern latitudes, we huddle close to the border, for warmth.

7. In the War of 1812, we kicked your butts. The reason why your Whitehouse is white is because we set fire to it and it was whitewashed to hide the damage (for propaganda purposes). Some Americans will say that THEY won the war. However, to win, a party must reach their objective. Your objective was to take over British North America (what Canada was called then), our goal was to stop you. You don't have any more northern territory along the Canada/US border than you did before 1812. So who won? (Alaska doesn't count, you BOUGHT that state from Russia.)

8. A form of baseball was played just outside of Toronto, Ontario three weeks before Alexander Doubleday played the 'first' game of baseball in your country.

9. We do not find the term "Canuck" derogatory, like Americans find "Yank" derogatory. It apparently originated during World War One. Your soldiers were call "doughboys" ours were called "Johnny Canucks". I think the British coined the term, but I'm not sure.

10. We are not "just like Americans", we have our own national identity, we just haven't figured out what it is, yet. Someone once said that, "Canadians are unarmed Americans with health care." That pretty much sums it up, I guess. We are internationally (but unofficially) known as the "World's Most Polite Nation."

11. Our national animal is the beaver. Sure it's just a rodent, but they're not even CLOSE to being extinct. You can still get money for beaver pelts. It is NOT our main unit of exchange, we have money, just like you.

12. We do not find the fact that American wear Canadian flag pins (so they can get better treatment in Europe) very amusing. So stop it.

13. We have Thanksgiving in October, so we don't look like copycats (it IS an American originated holiday, after all). However, we celebrate Christmas, Easter, Halloween, Passover and other holidays at the same time you do.

15. November the 11th is called Remembrance Day, up here. It is a day when all Canadians honour our war dead and the veterans who are still amongst us. Its significance is that on the eleventh hour of the eleventh day of the eleventh month the Armistice was signed, ending World War One.

16. Not every Canadian speaks French. In fact, Canada is the only country where speaking French is not cool.

17. We spell words differently. Honour, valour, defence, neighbour, colour, centre and other words are from the British way of spelling. We also pronounce the last letter of the alphabet "zed", not "zee".

18. The Queen of England is not our national leader. She's' just a figure head and somebody to put on our money with the birds. (Some Royalists in Canada will have something different to say about his, but they're a minority.)

19. Our states are called Provinces. We even have three Territories.

20. We DO NOT have snow all year round. We DO NOT live in igloos. We DO NOT ride around on dog sleds.

We DO NOT have to check the back yard for polar bears, before we let our kids go out to play.

21. Many Canadians have never played hockey in their lives. There are many who do not like hockey.

22. We call eskimos "Inuit", because that's what they call themselves.

23. We didn't invent hockey, we just made it better.

24. Even if an "American" team wins the Stanley Cup (the "World Series" of hockey) it doesn't matter to us, because all your best players are Canadian.

25. On the other hand, if a "Canadian" team wins the World Series we ignore the fact that all our baseball players are American.

26. Stop asking if we know somebody in Canada when you find out we're Canadian. We DON'T know everybody in Canada.

27. We have no right to keep and bear arms. So leave your guns home if you're visiting, otherwise they'll be confiscated at the border. We have very strict gun laws, and fully automatic weapons are pretty much illegal. It almost takes an Act of God to get a licence to own a pistol. (This may be a contributing factor as to why we only have about 600 homicides a year, nation-wide.)

28. The border between Canada and the US holds the title of the "World's Longest Undefended Border".

29. Our side of Niagara Falls is nicer looking than your side. In fact, even when Americans use images of the Falls in advertising and movies, they film the Canadian side. It's called Horse Shoe Falls, by the way.

30. We own the North Pole, and therefore Santa Claus is Canadian. The internationally recognized mailing address for jolly old St. Nick is:

31. That movie you thought was filmed in New York, or Seattle, or Chicago, or Los Angeles -- may have just been filmed in Vancouver, Montreal or Toronto.

So there you have it. Now you just might know more about Canada than most Canadians do!

Who doesn't enjoy a compliment every now and then?

But have you ever thought you were complimented only to realize you've just been insulted?

For some people those backhanded compliments are unintentional, for some they're very much deliberate and for some people it's actually their love language.

Whatever the purpose, some of these veiled insults are downright clever.

A good story—whether it's a book, movie, manga or TV show—can really draw us in.

We can get invested in the story to the point we begin to have real feelings about the characters.

That's why having a favorite character die can cause real grief.

There is always a way to make money.

We can start to collect coin as early Pre-K.

We just have to be creative.

And who is more creative than a person who thinks they have nothing to lose?

Every school has a black market system.

Things are being sold and traded for that would shock us all.

Love itself and the search for it can be a total mess.

But no matter how much we thirst for it, we have to be diligent and look out for warning signs that a potential partner isn't a good fit.

Red flags and warning signs are always jumping out in front of us.

If you think there's something off, they probably could be!