Pink For Girls And Blue For Boys: The Surprisingly Strange History Of Color And Gender 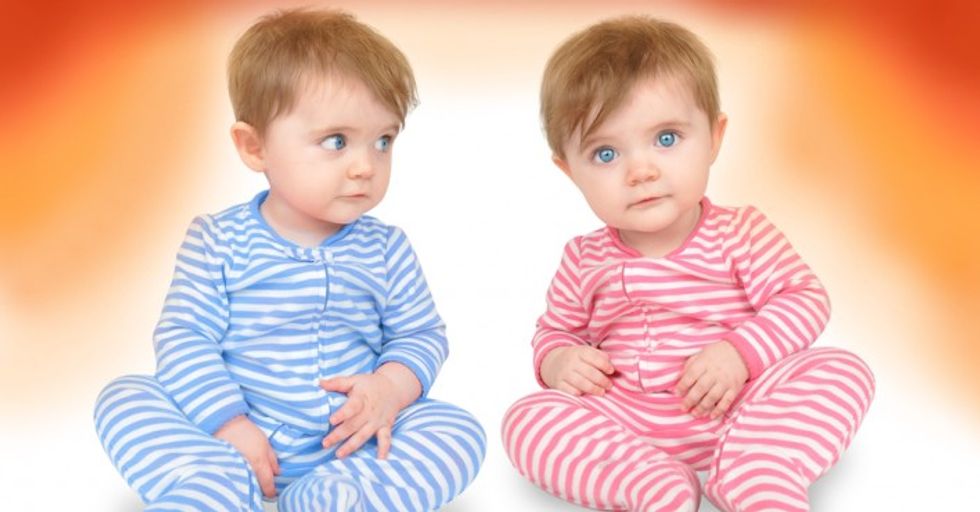 Why, it's Franklin Roosevelt! The 32nd President of the United States of America.

It's uncommon to see photos like this today a young boy in a dress, dress socks, and shiny little black shoes, holding a lavish, feathered hat. But in the late 1800s? This was commonplace.

In fact, social norms dictated that boys wore dresses until around the age of 7 (usually the time when they would also receive their first haircut). This kind of style was considered gender neutral acceptable for all children.

It was all a matter of practicality. If all kids wore the same garments, they could be passed between siblings and family members. If everyone wore white, bleach could easily remove stains.

So when did the whole blue and pink thing arrive?

Pink, blue, and other pastel colors arrived for babies in the mid 19th-Century, but still, there was no significant gendering of colors or clothing. You just put whatever you thought looked nice, on your baby, and called it a day.

But then.... something happened.

Just before World War I, baby garments started being colored according to color.

And what do you suppose was the color assigned to each gender?

It was the opposite of what we know today.

Yeah, that's right. Pink was a boys color, as it was considered 'strong' and 'decided', while blue was for girls, as it was seen as 'delicate' and 'pretty'.

An article from the trade publication Earnshaw's Infants' stated: "The generally accepted rule is pink for the boys, and blue for the girls. The reason is that pink , being a more decided and stronger color, is more suitable for the boy, while blue, which is more delicate and dainty, is prettier for the girl." [Smithsonian]

It went even further than that!

Time magazine printed a full blown chart showing which colors were appropriate for boys or girls. Then, stores followed suite, and thus began the beginning of gendered sections of a children's clothing store.

So, first we started with all the kids in white dresses.

Then, boys were in pink and girls were in blue.

But how did things get to how they are today?

Since when has pink been considered a "girl's" color?

Well... it's not exactly clear.

For unknown reasons, the 1940s saw a shift. Clothing manufacturers arbitrarily decided on pink for girls and blue for boys, and ever since, that's been the standard.

Many studies have tried to determine if there was a color preference between young girls and boys during that time. Perhaps, they thought, boys just simply liked blue and girls liked pink, and that's what caused the shift. However, nothing has shown this to be true.

One interesting finding of color preference has shown that the majority of humans prefer blue to pink. Actually, pink is one of the least liked colors by adults. Could this shift in color-gender assignment have been a reflection of prevailing attitudes towards girls and boys at the time? After all, it was often much preferred to have a boy. That's not been proven, but it's still an interesting question.

I guess this leads us to the big question... why do we even have two different colors?

What was the point of creating a gender-specific palette for boys and girls? Why do we care at all?

As with most things in this world, it all comes down to capitalism. The commonly accepted reason that companies started advertising gender-specific color schemes is because then parents would feel pressured to buy a whole new wardrobe and set of baby accessories in the "appropriate" colors if they had two differently sexed babies. In other words, we've been played.