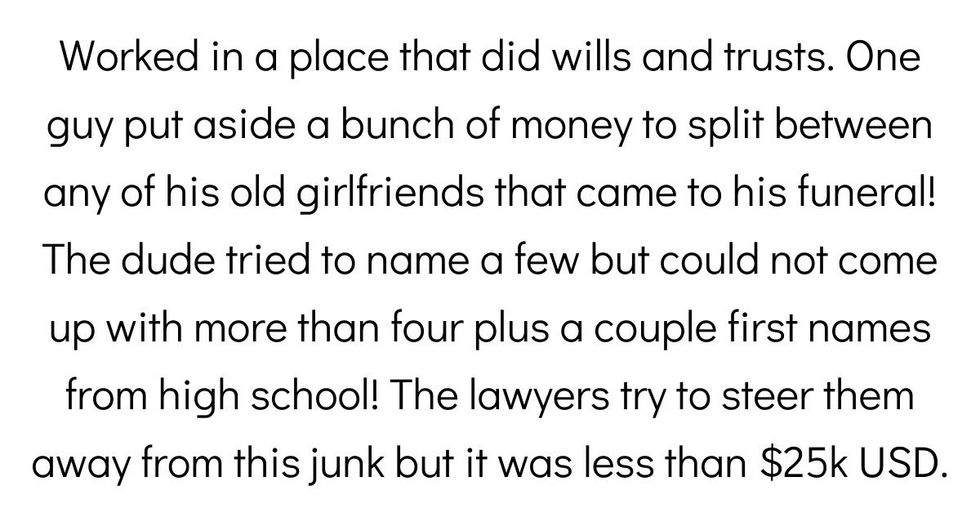 When my grandfather passed away, it fell to my grandmother to execute his will. He wasn't a wealthy man, so we weren't dealing in money here.

Instead, we were talking about things that had sentimental value. The items all made sense to us, but to a lawyer or another outsider it would have seemed strange to see a nail clipper and a ziploc bag of sea shells in a will.

Lawyers of Reddit, what are the most interesting things people have included in wills that you've seen?

And it turns out that "weird" stuff ends up in wills all the time!

Worked in a place that did wills and trusts.

One guy put aside a bunch of money to split between any of his old girlfriends that came to his funeral! The dude tried to name a few but could not come up with more than four plus a couple first names from high school! The lawyers try to steer them away from this junk but it was less than $25kUSD.

I administered trusts and estates for 35 years with a large national bank.

I had one trust where a woman left a ton of money to her grandkids. They got all the income the from her assets over the years and the trusts fully distributed to them at age 35. Except for one grandson.

He was gay and the grandmother believed that a particular individual was responsible for "turning" him that way. For him to get his inheritance, we had verify that he was not in contact with his ex-lover once each year. If he was found to be in contact with him, his funds would be withheld for the following year until he could prove he was no longer seeing the guy. If he ever formed what seemed like a lasting relationship with the man again, his portion of the inheritance was revoked and to be distributed to the other grandkids.

We used to get a signed statement from the kid each year and that was enough for the probate court to approve the money.

A few years later, courts started allowing people to remove provisions like these that seemed ridiculous to have to adhere to. The beneficiary and the bank went to court and we asked that the provision no longer be followed. The judge agreed that it was too much "control from the grave" and let the provision be struck down.

We don't know if he went back to his old lover after that.

Someone willed their Eve online video game account. It was worth thousands apparently.

He had no family, so he willed it to one of his friends... and one of his other friends threw a fit. So we ended up with two grown ass men fighting over an online game account.

We found out a couple of years later that friend 2 turned in friend one to the game's admins and moderators. The account got taken away from . Apparently they deemed it a terms of service violation or something.

Not a lawyer but my buddy is one. Couple months ago he said an older lady had asked him to include something quite peculiar. She had left the instructions for her family to decorate the family Christmas tree.

The weird thing was that her daughter in law was the only one allowed to put ornaments on the tree and her granddaughter was supposed to put the star on top. After she had passed (about a week later) he read the will to the family, and a bunch of drama followed.

Pretty weird will if you ask me.

Buried With Their Best Friends

Elderly women deciding that their pets - no matter their age or health - should be immediately put down when they die so that they can be buried/cremated with them is shockingly common.

Year Of The Beard

My cousin is a lawyer and apparently one guy grows out his beard all year long before shaving it on New Year's Day and saves it in a bag with the year written on it. He has in his will that certain years go to certain grand-kids because that was the year they were born, got married, Etc.

The rest are to be raffled off equally to all of his decedents.

Why does he think they even want his beard hair?

For the Polyjuice Potion

This lady included a clause in her will stating that 1 of her 3 daughters wasn't allowed to get anything in the will, and to read the letter that was annexed to the will to find out why. I never got to see the letter since I'm the paralegal but I thought it was super odd.

When my very wealthy, Catholic grandfather died in 1983, his will read like a scandal sheet. He didn't just bequeath or withhold: he listed reasons why. My cousin Aaron was born out of wedlock so he was SOL. Another family member had her lovers named then received no money.

Someone else had a good job and was raising a family "the right way" (Catholic) so he was awarded money. Never mind that he was the biggest asshole on the Earth.

He gave most of his millions to charity so some good came of it.

A quite wealthy man willed specific rooms in his mansion. That is, the house was not to be sold or inherited, but designated people were given use of specific rooms for their lifetime.

Take Care Of The Dogs

Wealthy women left 1 million dollars in trust for the care of her dogs. Her two sons and daughters, however, were each given exactly only $10,000. That was the amount of the loan the woman had initially received from her father to help her grow her wealth.