People Describe The First Time They Remember Feeling Like An Adult

People Share The Worst Justifications For Cheating On Their Significant Other 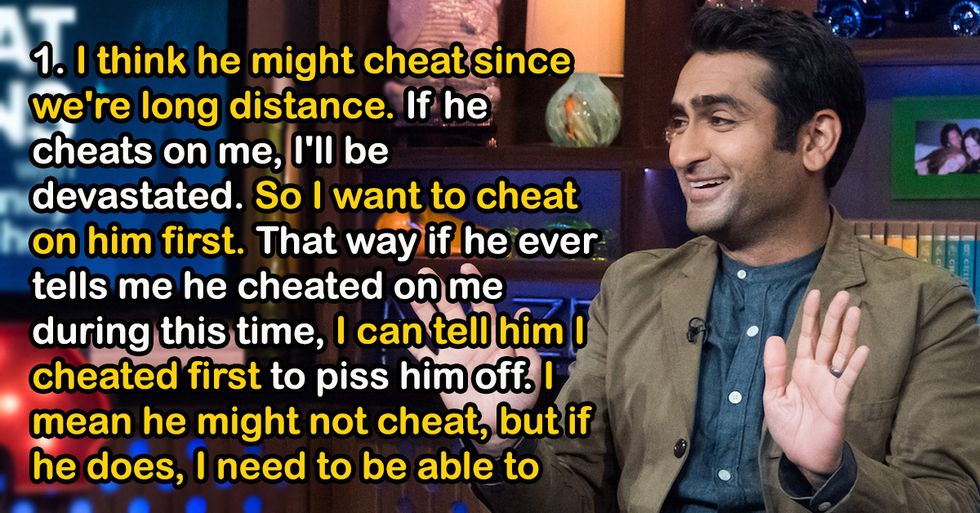 People Share The Worst Justifications For Cheating On Their Significant Other

THEN JSUT SAY SEX ONLY! NO JUDGEMENT.

I'M GOING TO PUNCH YOU! LOL

STICK WITH THE CLASSICS.

MAYBE TALK TO YOUR PARTNER? DUH!

GOOD FOR YOU. BYE!

WELL LET ME GET MY PASSPORT!!

DON'T BE A TAYLOR SWIFT SONG.

SOME PEOPLE NEED TO A GOOD SMACK!!! OR SIX!

IT'S OK... I'LL STRANGLE YOU WITH MY SHOELACES!

"Big Brother is watching you..."

The famous words from George Orwell's dystopian novel 1984, which tells the story of a world governed by omnipresent surveillance.

Today, however, many people are under increased paranoia that their every step is being monitored by the government, or by the world's largest corporations.

Not helping their fears, is when people look back on information collected by their Google data, and see that virtually every step they've taken has been documented.

Even things some people might not remember doing themselves.

People Break Down The Best Facts To Teach Young Kids

Even if they sometimes appear less than excited to go to school, children are always eager to learn.

As they will encounter new experiences with each passing year, resulting in parents and other adults being bombarded by new questions regularly.

Most frequently, if not necessarily intentionally, as a delay tactic before going to bed.

Which is when it's important for the parent, grandparent, or babysitter who's in charge of bedtime to come up with one, exceptionally satisfying fact which will give them plenty to think about, or dream about, after the lights are turned off.

Who would have predicted the endless source of entertainment and fascination the Internet provides.

With countless websites where one can shop, watch movies, catch up on news, play games... and do just about anything.

Of course, some of the better known websites, such as Amazon, YouTube, Facebook and Google are likely visited by just about everyone every so often.

But practical and entertaining as the world's most visited websites are, that doesn't necessarily make them the most interesting.

Should one find themselves going down an internet rabbit hole, as we all do every so often, we might discover a unique, truly fascinating website which might cater to our personal hobbies or interests, or simply catches our attention for inexplicable reasons.

As a kid, it’s easy to make friends. You don’t need to do much. Just share your pudding snack pack or make mud pies, and you have a new best friend.

As an adult, it can seem harder. You can’t really make mud pies anymore (in fact, that may be a way to drive off friends), and adults are a lot less open than kids, so it can be difficult to develop a rapport.

However, it’s not as hard as it seems to make friends, even as an adult. If you’re struggling, or even just looking for new ways to meet people, Reddit has got you covered!