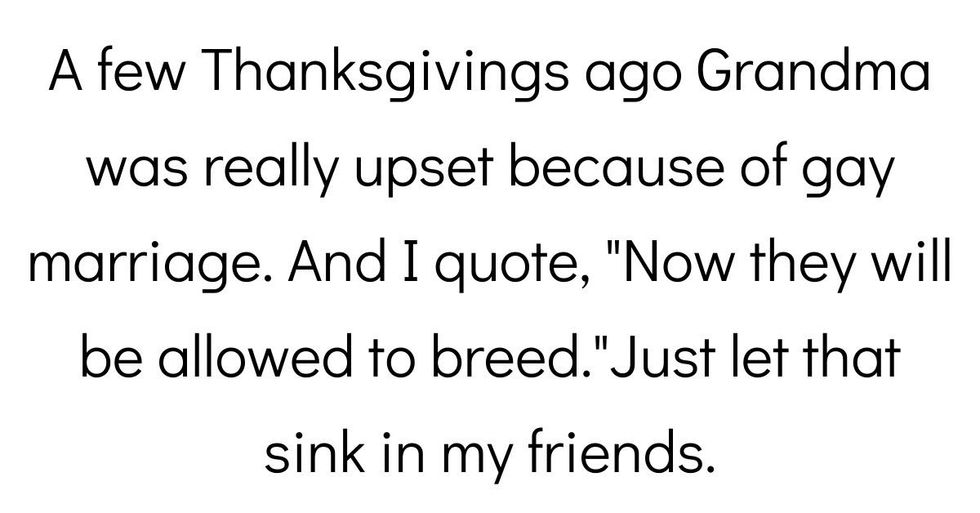 Sometimes, though, a statement is so bad that it's just met by shocked, uncomfortable silence until someone awkwardly changes the subject.

What follows here are more of the latter.

"What crazy-*ss thing did your racist uncle just say at Thanksgiving dinner?"

My grandpa said he has no idea why anyone would drink modelo cause you have no idea what those mexicans are putting in it.

There was wide spread panic a few decades ago about Cornona being made from or infused with piss from the mexican brewery workers. Corona was rapidly becoming the #1 best selling imported beer in America and its competitors started making up the peepee rumors to slow it down.

The lie was surprisingly wide spread and less surprisingly, unquestionably believed by american consumers and did significantly impact coronas sales.

My wife's uncle said, "I can't believe we can still call it Black Friday. I figured someone would have taken offence to that by now and raised a stink about it."

"turn off that n-word music!"

There was a long pause while all the family awkwardly took in his racism, the only response was one cousin noting, "... But it's Kid Rock..."

A few Thanksgivings ago Grandma was really upset because of gay marriage. And I quote, "Now they will be allowed to breed."

Just let that sink in my friends.

That kid in third grade was right, babies do come out of the butt!

Wow, what a perfect thread. My uncle went off today.

He’s very conspiracy theory heavy, and this time apparently the “sand-*******” are going to start coming from over the hills and he will be ready to shoot. When I asked where they were going to be coming from he instantly responded with a dead-serious “Minnesota”

Minnesotan here, can confirm that this is definitely the truth

My uncle asked me (21M) if I "liked to suck d*ck" because I got my ears pierced.

Had a neighbor move in next to me. Fortunately. she is long gone now. But within the first few sentences of just meeting her, she asked me if I could point out where "the blacks live."

Um, we have a pretty mixed area here. Everybody is everywhere. And right at that moment, I could honestly not differentiate one house from another. They kinda look the same, it's not like they have a plaque to identify which houses have "the blacks."

I reread this multiple time and kept finding so many things wrong there...

My cousin said that the dark meat on the turkey is only worth 3/5ths of the white meat.

Most of the racists in my family would not have been educated enough to get this joke.

(Aunt) There is now a muslim woman in a head scarf sitting near at work and she feels all tense and anxious now cause "who knows whats going in her head?"

...like the hijab covers up the telepathy port or something?