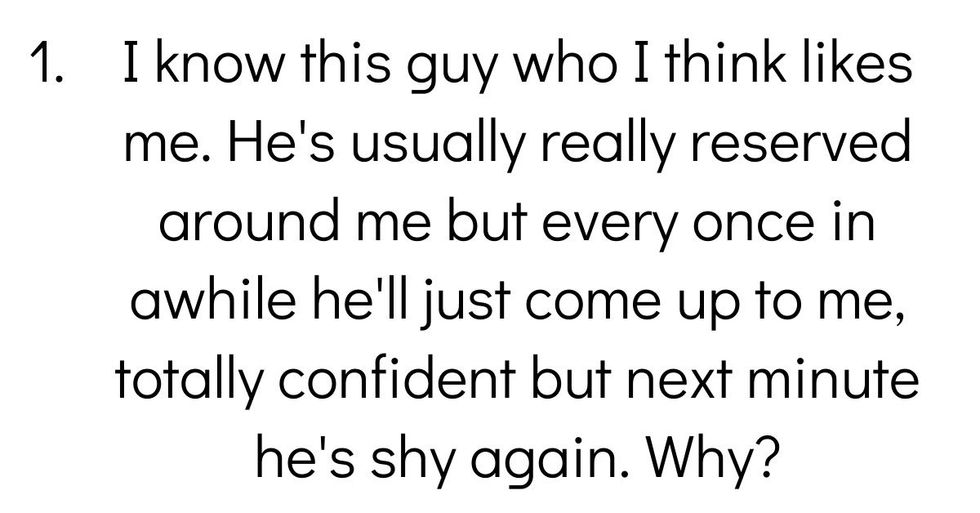 Women Break Down The Things About Men That Downright Confuse Them

If you are a woman (or any non-cis man gender), the things men do can seem strange, confusing, and even stupid. While we may not understand it, man logic is a whole different way of thinking. After all, as a wise person once said, "men are from Mars". Here are a few examples of this from the women of Reddit.

u/_snazzleton_ asked: Women of Reddit, what is something about men that confuses you?

It can get scary.

My bf and his friends play video games that make them angry and upset more often than not, but they insist they love them and are their favorite games.

It's a stress release. Men are generally taught to not show emotions and be tough. Games are a way to let those bottled up feelings out after a long day of being a rock.

We just want to shoot some motherf*ckers.

When a girl sits in your lap what does it feel like, and is there a right way and wrong way to do it?

Face: Chill. This is cool, havin' a good time.

Brain: AAAAHHHHH! She's sitting on my lap! WHERE DO I PUT MY HANDS!

Does having a d*ck feel uncomfortable when you wear pants? I feel like it would stick to your thigh and I think I wouldn't like that.

Not really, boxer briefs do a reasonably good job of keeping it contained. It's actually more uncomfortable how sometimes it likes to get tangled up in the boxers I sleep in.

I know this guy who I think likes me. He's usually really reserved around me but every once in awhile he'll just come up to me, totally confident but next minute he's shy again. Why?

If he does like you, he's probably nervous. He's getting moments of courage that don't last forever. He might be looking for a clear 'go for it' signal. So if you're interested, try approaching him during a shy moment. You making the move might be the sign he needs.

What's the deal with your 2-in-1 shampoos? My boyfriend has a 5-in-1 and I don't understand how it can wash everything!

What does it feel like to stick your d*ck in something? What's a comparable feeling?

Imagine if your finger had about 10,000x the nerve endings, but just at the last knuckle and fingernails aren't a thing. That's somewhat equivalent. Now imagine that feeling attached to your groin and the feeling radiating deep to your core.

Ejaculation has the same heart stopping sensation as a good sneeze, as well as a evacuating feeling like a good poop or like when you finally pee after holding it for a long time. But again, all this radiating outward from your core in the direction of and through this groin appendage, almost convulsing at times. Your whole body gets hot, and there's a brief moment almost like passing out, then reality comes flooding back in as you catch your breath and recover.

Have you ever had to wait in line for the bathroom?

At tech conferences, all the time. There's always a bit of a joke about the tables being turned from the usual concert / sporting event type situation, because the ~10% of attendees who are women have no wait at all.

How do you tell if a guy likes you and how do I get a guy to like me?

Don't be afraid to make the first move. Even if you're anxious, keep in mind that asking a guy out is a massive ego boost for him. Not in a bad way, more like "this is the most positive thing to happen to me in years" kind of way. And a guy will remember you being into him for years afterwards. Hell, I got a compliment from a girl I'd never spoken to years ago in high school and it still makes me feel better about myself.

Is turning simple things, like a towel roll or a pool noodle, into a pretend gun an instinct for you lot?

If it's gun shaped and I'm with my buddies, absolutely.

What is it like to have large jean pockets?

We can put anything in it from switches to wallets, you name we can put it in our pockets.

When I text multiple questions to a guy, they only seem to answer one question and ignore the rest. For example:

me: hey did you still wanna see that movie later tonight?

me: also, are we still working out at 2 tomorrow?

(no response to the first question)

I was wondering this too...

Like how do d*cks work? Can you accidentally sit on it? How do you place it?

It's possible to sit on your balls but it rarely happens and if it does then it hurts for a bit but you stand up instantly and sit back down but the pain is still there for a bit.

Clean up after yourself!

I totally get that they can't always control their pee stream but half the time they don't clean it up. Why?

It disgusts me when I go into a bathroom stall and see someone didn't clean up after themselves. Like - why do I have to clean up your mess? I will always clean up after myself.

Bro Code is a real thing?

What are some of the rules of bro code?

I once knew a guy was interested in me and several of his friends sh*t talked him to me... saying they weren't sure if he's clean since he doesn't use condoms, saying I deserve better than him, he's just a f*ckboy and I don't want to be another number... obviously I appreciate that but did they break bro code in doing so?

I guess? I think this falls under the more general rule that a bro must not, under any circumstance, interfere with or interrupt another bro as he is attempting to score, nor otherwise damage his chance of doing so.

As far as other rules of the Bro Code, the two most important are: 1) never take a urinal directly next to an already occupied one unless there is no other choice, and 2) greeting someone as you walk by is to be done, after making eye contact, by way of a single nod - nod down for a stranger, nod up for a bro.

My fiancé is 11 years older than me so I feel this.

What's your deal with age gaps? Is it just a joke, or would you guys actually go for anyone 18 and up, regardless of your own age. No hate, just curious.

Not a big deal.

If she's cool - we're certainly cool with it (legal).

Young woman who hasn't grown bitter or jaded with life. Better yet when they have opted out of their own gen since many just see it as a dead end. You can't have a future with a guy who sees a dinner date as a fast food visit. Too busy playing games than paying attention to her. The final nail is not wanting to be mature.

And it's beyond just sex for men. That's a poor reasoning used so often. It's vitality - her energy; he will do things with her that he would never do with someone his own age. A great joy in that.

As said, 'you're only as old as you feel' and with a younger woman you feel... opportunities.

If both are happy, the age gap pointless. She wants an established man, not a boy. And he wants her spirit. A fair and merry trade.