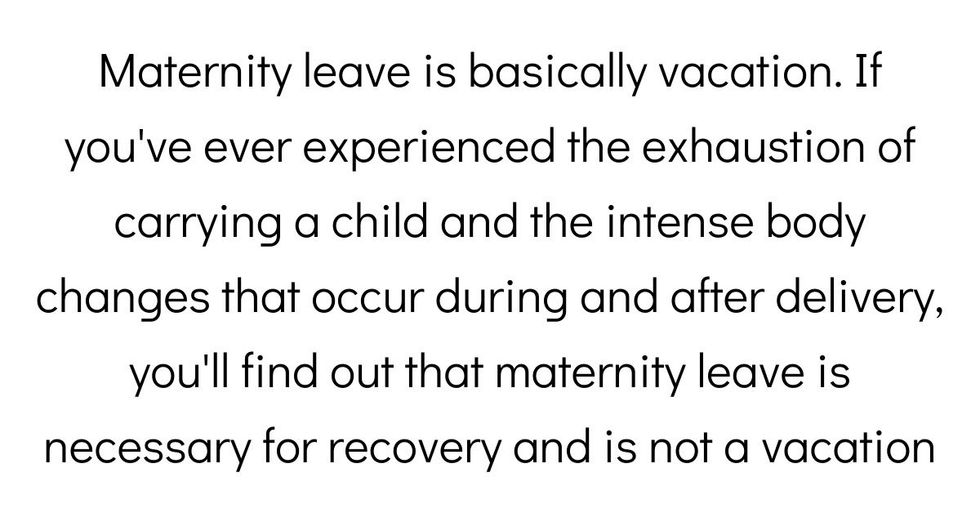 People Dispel Myths About Women That Are 100% Untrue

Most men are seriously wrong about vaginas, the far-reaching interests and motivations of women, and what is involved with CARRYING A HUMAN BEING INSIDE YOUR BODY.

I am not a woman. I cannot fully empathize with how frustrating men mansplaining women to women must be.

But I can read this reddit thread and at least understand on an intellectual level. It's also pretty hilarious to hear just how far reaching men's ignorance can be.

u/xClovis7 asked, Women of reddit, what myth about women is 100% untrue and infuriates you when you hear it?

Best learn what's going on down there

We pee with our vagina.

That the more sex you have, the looser your vajayjay gets.

That the clitoris is hard to find.

Or that labia grow exponentially with lots if sex.

Or that vaginas are anything but elastic.

Basically every ridiculous myth about female sexuality and their genitals.

Work from home is still work

Maternity leave is basically vacation. If you've ever experienced the exhaustion of carrying a child and the intense body changes that occur during and after delivery, you'll find out that maternity leave is necessary for recovery and is not a vacation. Try working with a 2nd, 3rd, or 4th degree tear while now trying to deal with a baby that needs to feed every 2-3 hours.

That we don't need pockets in our fu**ing clothes.

That as little girls we all dreamt about our future wedding. Not all women want to get married or actually enjoying attending weddings

That because you don't like another woman it's only because you're jealous. Listen, I can hate a woman because of something she did or said and in no fu**ing way be jealous of her. She may be just dumb

Yeah not how that works

That we can just "hold" our periods. Do you honestly think we would still need feminine products if we could do that?

Stuff about our periods in general. Like if we're mad, it's definitely because we're on our period. We never have a legitimate reason to be upset. Also myths like we're able to hold in our period or we only have it for a day or that we're impure. The impure one definitely infuriates me. I just think about the billions of women throughout history, and sometimes even today, being treated as if they're impure or an evil omen because of a bodily function they cannot control. Banishing them to menstrual huts when they have their periods or not allowing them to touch anything. And yes, this happens. My mother as a teenager was not allowed to touch anything when she had her period. It got to the point where she would just not tell anyone she was menstruating and do what she wanted.

You also don't like crowds and spending all your money?!

That we all love shopping. I fucking HATE shopping.

That all of us secretly hate each other and are innately gossipy and bitchy. Some dipsh*t on here tried telling me once that he knew all women resented each other because he knew the "nature of women".

That women are irrational because of their hormones. The irony is that some men make excuses for their behaviour because testosterone apparently makes them unable to control themselves.

That if I am dressed nice I want attention.

Soooo much more to discuss

My favorite stereotypes of women I hear is the idea of how we interact with each other when we're in groups. 90% of my conversations with half of my friends revolve around the latest video games and horror movies coming out. Occasionally we'll talk about emotions, relationships, or clothes and make up, but we would both be bored if that was all we talked about. I also know of about 1 person who greets me with 'hey girl!' (I refer to both gender friends as dude). Not that any of that is bad, I just find it hilarious when people assume women get all squeally and affectionate or close and gossipy when they spend time together. Our friendships are just as unique and varied. Doesn't so much make me mad when people assume I'll act that way with my friends as it makes me laugh and pity their ignorance.

I went to preschool in a church. My teacher told us the story of Adam and Eve. At the end she said us, "This is the reason god made women afraid of snakes." Several girls spoke up and said they weren't afraid of snakes. I don't remember what my teachers exact response was but I remember she was really annoyed.

My Mom, For Example, Sounds Like a Weed Wacker

That women don't snore (seriously, I've heard this loads and it always baffles me).

People breathe when they sleep, sometimes it makes some noise, male or female. Let em breathe.

That females are not good at video games. Or that they have a male friend who is boosting them to their current rank (if it's higher than theirs). And then when they find out you're actually better than them they try to deny it.

It's so annoying to go in a lobby with random people and it's filled with guys who belittle you or talk down to you because you're a female.

That we are bad drivers. I have had my first car for 3 years. I'm in my early 20's. I have never crashed, but have had two men crash into me from behind.

Both times I had to fight tooth and nail to the officers to believe me. Both times the blame was given to me, even when the crashes were from behind and back side (merge lane and red light) The cops' reason? "well, unfortunately ma'am, I have to put the blame on you since you are a fairly new driver. Drive safer next time/ You should always keep distance while in the merge lane even if he was behind you."

Not a girl, but i always found it sad to see articles where rape cases are shut down because she has an intact hymen. The hymen doesn't break the first time you have sex, but it can if you are too rough with it. Hell, horseback riding and tampons can break it. And it won't always bleed the first time, it may break, or it might not, both are perfectly normal.

This was mentioned several times in high school: "women give sex to get love and men give love to get sex" which I think is as insulting to men as it is to women.

Nobody Wants to See You That Much

That we all hate when our significant other is going to hangout with friends & we expect them to be with us 24/7?