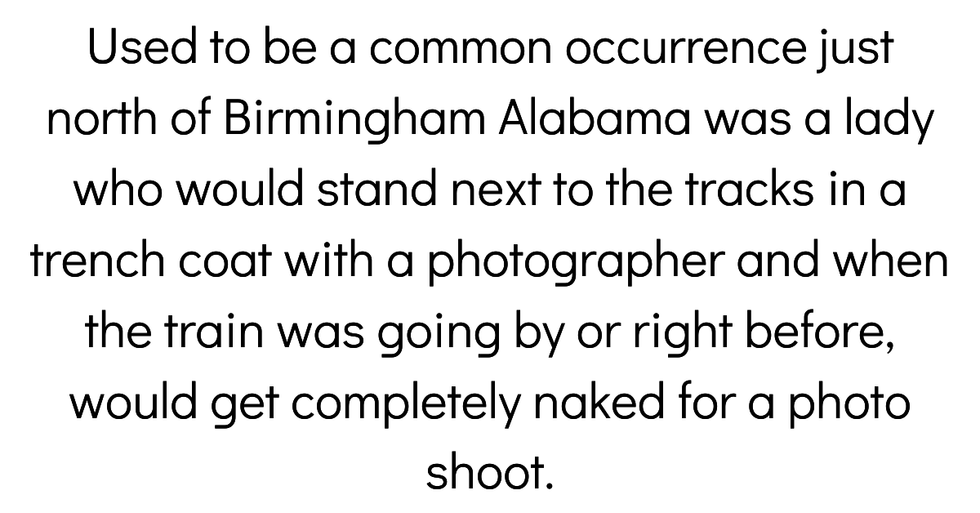 Trains are often screaming through desolate areas for hours at a time, with most passengers out cold or watching Season 2 of god knows what. Without that front-and-center seat conductors are lucky enough to have, there's no knowing what loony things are happening along the route.

It's no surprise real-life conductors with that very view have some pretty strange tales to tell.

u/ArGeN1254 asked, "Train drivers of reddit, what is the strangest thing you've seen on the tracks?"

As Good a Place as Any

I've been driving trains for about 10 years, the most memorable would be two Male peacocks on the track doing some sort of a dominance display. Very pretty birds but a shame to hit them.

Maybe the Vibrations Do Something For Him?

The human unicorn of Chicago. It's a guy that would bend over next to the passing trains with a broom stick sticking out of his butt

How Many We Talkin' Here

Port o potty truck getting into an accident with a semi hauling toilet paper.

Seen From a Safe Distance

Witnessed a drunk chap grab the overhead lines once, melted his rib cage and his insides turned into goo.

Emus Do NOT Back Down

Train Driver from Australia, for me it would be either an Emu charging head first at my train, or two foxes fornicating in between the tracks..

I once saw a homeless guy getting a blow job from a toothless addict next to the tracks in Nashville.

Took So Many Tries to Get it Right

Used to be a common occurrence just north of Birmingham Alabama was a lady who would stand next to the tracks in a trench coat with a photographer and when the train was going by or right before, would get completely naked for a photo shoot.

Driving down the freight line, notice something shine and a figure in front of me, I threw it in emergency and we hit the figure. Got out to look and someone left a mannequin on the tracks and the thing shining was a flashlight.

Bit of a Fixer Upper

Probably the strangest thing was an entire collection of yard decoration things. Literally hundreds of items that were set up alongside the tracks in the middle of nowhere along about a half mile stretch. Plastic flamingos, those fake well things, fountains, decorative bricks, flower pots, flags, bird feeders, and all kinds of other stuff.