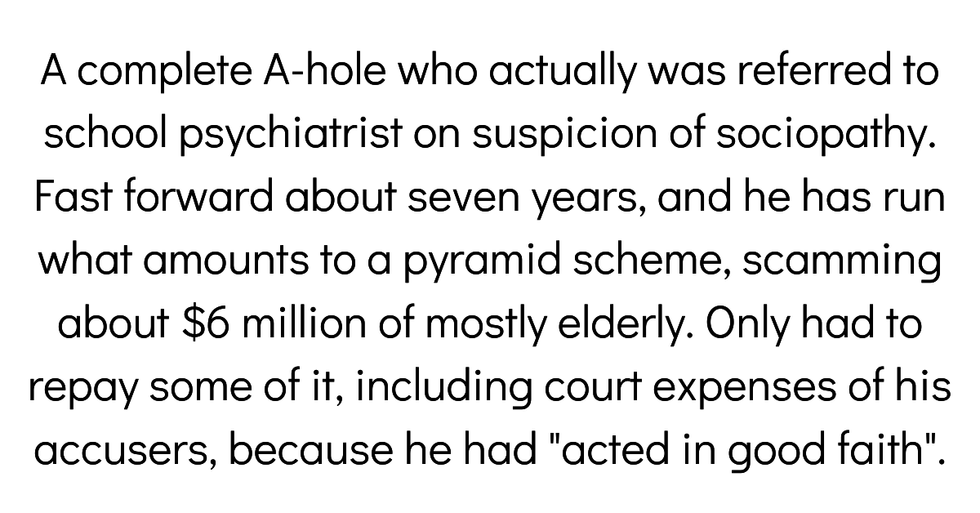 u/Diplodocus114With so many kids passing through classes year after year, it must be tough for teachers to know which are destined for greatness, which are wasted talent, and who will always be walking around not knowing which way is up.

And, for the most part, teachers will never know what happens to the vast majority of those kids.

Millionaires today are, arguably, almost a dime a dozen. But the ones who become famous do stay in teacher's heads, for better or worse.

u/HunkyMonkey69420 asked, "Teachers of Reddit who have had students become millionaires, what were they like in your classroom?"

My mom went to school with Queen Latifah. She supposedly came into the gym and rapped some days

Ahead of His Time

He started a recruiting business for high tech companies which became pretty large. That boy as annoying as f*ck to deal with as a teacher. Way too smart for his class, therefore bored, therefore an absolute little monster.

Wonder if he Wore the Turtlenecks Back Then

My moms friends husband taught Steve Jobs. He was apparently very arrogant and a huge douche.

Kid Was Probably Hatching Baseball Card Schemes at the Time

A complete A-hole who actually was referred to school psychiatrist on suspicion of sociopathy.

Fast forward about seven years, and he has run what amounts to a pyramid scheme, scamming about $6 million of mostly elderly. Only had to repay some of it, including court expenses of his accusers, because he had "acted in good faith".

Kept His Head Down

Jeff Bezos was in my mom's high school graduating class. He was valedictorian. She didn't really have anything else remarkable to say about him.

A Boy of Promise

He could throw a baseball REALLY fast.

Popular for a Reason

I am a teacher now but I went to high school with Heath Ledger, he was a few years above me. He was already in tv shows and commercials when we were at school so we as juniors already thought he was super cool. I remember he was charming, affable and popular but also a really lovely guy.

I worked with Drake's kindergarten teacher. Apparently he was a little sh*t.

High School in the 80s

One of my math professors last year said that she went to high school with Billy Ray Cyrus. He would play in bars and invite kids from school to listen. Apparently he was a great dude and had the mullet even back then.

I don't know if he ended up a millionaire, but if anyone I went to school with could have it would have been my buddy. After graduation, he got a PhD in bio-medical engineering, and when he got bored with that, started a chain of BBQ restaurants. He was one of the nicest kids that I hung out with and to be honest, I never knew how brilliant he was. He was definitely more of listener than a talker.

The father of one of my students won a million off a scratch ticket. This was a family living paycheck to paycheck, and often spent their summers living at campsites because it's cheaper than rent.

His Dad is using the money to buy a house, and since they won my student has been way more focused. He's turning in his work and just seems so much happier.

A Real Punch In The Gut

I went to school with a girl Who is now a multi millionaire with her own make up range. She was a bully, everyone hated her, she was so nasty to everyone around her, including teachers, but now everyones falling over themselves to tell her how amazing she is.

Kid Will Always Just Be Kids

A childhood friend from around the corner and her brother are now worth around 70 million. Plus she won a gold medal at the Commonwealth Games.

We had great fun climbing trees as kids.

I taught a future NFL player. He was built like a brick sh**house, was extraordinarily polite, kind, and thoughtful. He'd sit with the lonely kid at lunch. He was never late - in fact, he was always early. Straight A's. He was determined to be the best. Good-looking, well-spoken, every parent's dream.

Those Kids Musta Killed the Curve

My aunt taught Rainn Wilson in high school. He was in the same class as the guy that wrote frindle

Gotta Do What Ya Gotta Do

I'm not a teacher, but I went to school with a current NHL'er. He's definitely a millionaire now. He was rarely actually in class. Most of the time he was out training, and when he was in class he always cheated on tests.

Not a teacher, but went to high school with a guy that became a very successful Elvis impersonator. Does that count?

My moms boyfriend went to high school with Bill Fagerbakke (voice of Patrick on Sponge Bob). Not only was he a pretty good athlete but, according to my moms boyfriend, was super nice to everyone. "He was an every-man's man."