Why Do Bees Sting You If That Means They Die? The Answers To All The Things We've Ever Wondered About Bees And Their Behinds. 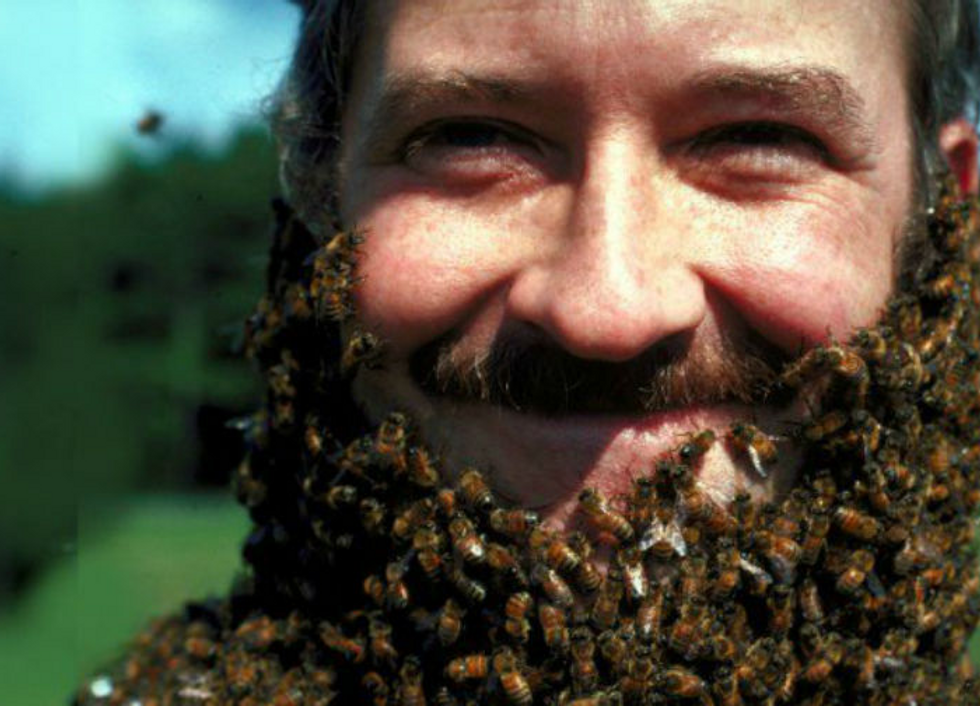 Bees are an important part of our lives.

Without them, we would all die because they are the key to pollination, which allows the plants to grow, which feed our animals, all of which feed us.

Mostly because of their ability to sting us. For some people, that can mean little more than an inconvenient prick, for others, a trip to the hospital, and, of course, there is everything in between.

There are all the tactics, too, for how to avoid getting stung. You've got your standard "stand still and they won't bother you" type of people. Then you've got the runners, usually combined with some level of screaming about said bee and constant updates on "where the bee is" until it flies away.

We get it. There is a bee and it's still around.

Then, you've got the swatters, the stompers, and if you're anything like my neighbor's dog, you know a thing or two about what it's like to use the "I'll just eat it!" method. Haven't tried it, probably wouldn't recommend, unless you're looking for a venomous source of protein.

It's pretty well known that after a bee stings you, they die. Which leads me to the question I've been wondering for a while:

WHY THE HECK WOULD A BEE STING SOMEONE IF THAT JUST MEANS THEY'RE GOING TO DIE?!

Well, as it turns out, in order to understand the answer, we need to know a little bit about bee stinging in general, which turns out, is pretty fascinating stuff.

There are a couple types of bees.

Like, 20,00 species to be exact. But here's the good news: the only types of bees that can actually sting you are honeybees. And even then, it's only the Queen bee (who barely leaves her nest, because she's very busy being Queen Bee) and the female worker bees. The males don't even have stingers, and all the other types of bees are, well, just doin' their bee thang.

Honeybees they have a couple of jobs.

One, is to gather pollen to make the honey. If you see a honeybee among flowers or just buzzin' around with a casual swagger, chances are you won't get stung by them, unless you sit on one or something. Chances are, they don't even notice you're there. They're more excited about the pollen that's around you.

The other job of a honeybee is to protect their hive. In the hive are their family members, their honey stash, and Ms. Queen. The honeybees of the hive act as the home security system, or neighborhood watch if you will. And they take their jobs very seriously. So seriously, in fact, that these gals are willing to die for the safety of their family. Because if someone gets ahold of that hive, everyone is toast. Mmm... now I'm craving toast.

Okay, back from toast break.

I've got some really weird facts to tell you about bee stings you'll want to remember these for the next time you're seated next to cousin Irwin at Thanksgiving and have to fill the silence with something (anything!). Irwin will love the bee facts, trust me.

Bee stings don't just ward people (and animals) off from the hive.

The stings actually alert other bees to come join the match. The stinger slowly releases apitoxin into its victim, which is accompanied by the release of alarm pheromones. You know, like when you meet that one creep at the bar and you eye your friends across the bar so they'll swarm in and get you outta there? Yeah, except instead of a look, it's a chemical secreted from a bee's recently torn apart butt thorn. If you get stung and it seems totally out of the blue, get yourself outta there. You're probably near a hive, and the moment those pheromones are released, there's more where that came from. Also, fun fact: the pheromones smell like bananas. The world is weird, you guys.

Interestingly enough, if you see a massive swarm of bees flying through the air, chances are they aren't interested in you. They're probably just moving hives. Isn't that kinda cute?

Anyway, back to bee stings.

1. Remove the stinger as quickly as possible to help reduce the amount of venom that enters your body.

2(ish). If you're allergic, you know, do the thing you do to treat your allergies. I'm sure you know more about that than I do.

2. Wash the area with soap and water and apply an ice pack to reduce swelling.

3. There's not actually another step in this list of steps, but I felt like only 2.5 steps wasn't enough, so I'm adding this step: read this super cool list of bee facts, courtesy of the Utah County Beekeepers Association, and...

remember that bees are our friends:

2. The "buzz" you hear from a honey bee is from the very fast flap of their wings. Honey bees' wings stroke 11,400 times a minute.

3. Honeybees are the only insects that produce food for humans.

4. Honeybees are responsible for pollinating approximately 80% of all fruit, vegetable, and seed crops in the U.S.

5. Honeybees have five eyes, 3 small ones on top of their heads and two big ones in front. No wonder they're such good mothers!

6. Honeybees never sleep. If only I could figure out how they do it.

7. A colony of bees can contain 40 to 60 thousand bees during the late Spring or early Summer.

Thank you for reading!

Ideally, you wouldn't have to decide between the two.

In a perfect world, you would be able to find the true love of your life and be incredibly wealthy all at once.

But, as the saying goes, you can't have everything.

Though if faced with having to choose between the two, people might have a different idea of what the obvious answer would be.

Redditor lulinghayaw was curious how people would decide when faced with this decision, leading them to ask: