Night Shift Workers Reveal The Scariest Things That Have Ever Happened To Them While Working Late. 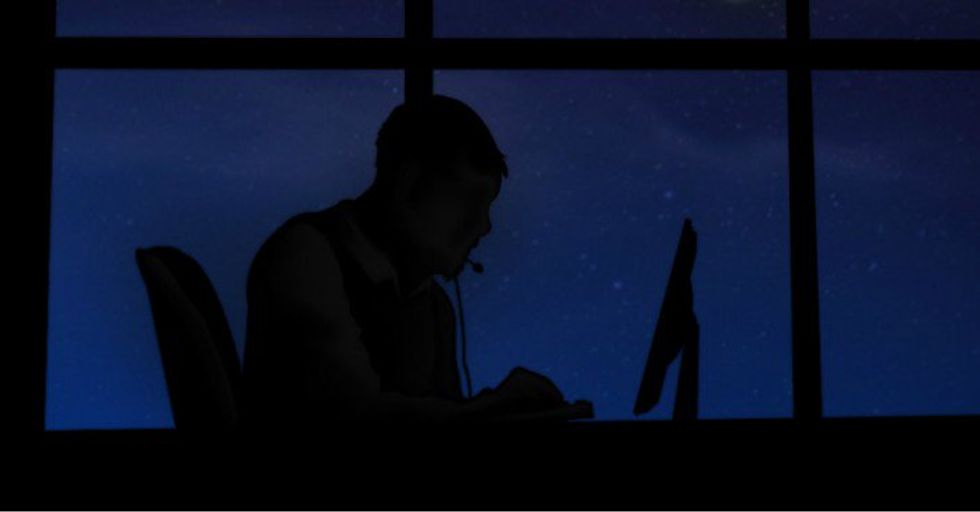 Night shifts are where it all goes down...

Thanks to all the folks on Quora who shared their stories.

A Bank At Night Is No Place For Children, by Abdul Quadir Saifee

I used to work as PC support in those days and was working for a Bank. One of the tasks in the night shift was to image new desktops with the company image (to install a new Operating system).

It was around 2 AM and I was alone on the whole floor, engrossed in installing the OS. Suddenly I heard a kid running and laughing. I got shit scared. I thought I might have just imagined it.

Then, I saw one cubicle light was on and a guy was sitting there.

They were his kids, around 5-6 year old, who were playing. He told me that he had some unfinished work and thought to tag along his kids, till he finishes it up.

I wanted to shake him up badly and shout that he almost gave me a heart attack, but in the end just said "cute kids".

Continue to the next page for more night shift stories!

Being a military camp guard as part of a small detachment, I was frequently assigned to do night patrols around the camp perimeter. For one of the patrols, I was walking along with a partner, wanting to complete the round before I turned in for the night.

Walking past a building, we suddenly heard footsteps coming out from the building. We paused and checked our watches, 2am odd in the morning. We decided to walk around the building, checking every exit. As it was a secured building that stores millions of dollars worth of equipment. Each exit was armed with an intrusion detection lock. Each lock was armed.

We heard more footsteps, and decided to radio back to the guardhouse, "Is there any night ops going on?"

"No. Everyone in camp had checked out." (The guardhouse holds the keys to important keypresses. When these keys are turned in, no one except for the essential staff, i.e. camp guards and other personnel on duty are in camp)

"There's footsteps in building X. All locks are red (locked and armed). Advice?"

"Er. Continue your patrol. Will check in with duty orderly spec."

The DOS checked the building out soon after, and there wasn't anyone around.

Continue to the next page for another scary night shift story!

Nothing To Do, by Kevin Cameron

Probably not what you are looking for, but this is the scariest thing that happened to me while I was night shift "security" at a data center (I was just an 18 y/o kid and my job was to sit in the office all night alone).

This was in the very early days of the Internet so there was no Facebook, Youtube or Quora to kill time. Usually I took the time to study, or practice guitar, but sometimes one needs a break from that too.

I decided to photocopy my face, which led to my butt and ...other parts.

I was the only one in the building, so it was super easy. But then the paper got jammed ...after having copied my other parts. There was about one hour before the early people would start coming into the office. I had no idea how to open the very expensive copier. There was no manual anywhere.

I was pulling parts off the machine, trying to remember where it came from so I could put it back (no smart phone to just snap a picture, as a note of how to put it back together). I had pulled off and replaced a ton of parts that gave me no access to the jammed paper, and there were only thirty minutes or so until the first people start coming in. What if someone decided to come early today?

Long story short, I managed to figure out how to remove the offending jammed copy with literally only about three minutes to spare. I hadn't even had a chance to return to my "security room", and met them in the hall as I was walking back from the copy room, my photocopy neatly tucked into my pocket. Close call.

Continue to the next page for another creepy night shift story.

The Coffee Machine, by Vikram Murthy

Those sleepy eyes and weary hands not willing to work but still have to work.

I remember one such incident that happened to me when I was in a week long night shift work.

After 2 nights of work on the 3rd night, things were going as normal. The work was engrossing at that moment and I came to the pantry area to fill up my water bottle. As I was filling the bottle, a coffee vending machine next to me started making all sorts of rattling noises and it started shaking.

Imagine, around 1 AM in the night with no other soul in sight and this happens. I was s**t scared at the moment (thanks to the Transformers series). I froze there for quite sometime. The bottle started overflowing and the machine continued its drama.

Finally I gathered some courage to switch off the water tap and then slowly tilted my head to look at the coffee machine.

There on the little display of that machine were these words.........

That is the day (or night) where I learnt a very important aspect of coffee vending machines: Auto Flush!

Continue to the last page for one final scary night shift story...

The Man And The Closet, by M Melanie Chevalier

Years ago, while I was attending Arizona State University, I worked the night shift at a book store. Modern World Books. As a college student it was a great place to work. $25 an hour and flexible schedule. I typically worked in the stock room, on the computer, but one night I had to work the counter for an overnight shift.

During one of my rounds, making sure everything was in place, a very large man tried to shove me into the mop closet. I am sure that he had ill intent. When I say large, I mean he was a mountain.

I was carrying a knife at the time in my right hand, blade flat against my wrist, hidden in a way that the cameras wouldn't see I was carrying it. I instinctively threw up my hands, pushing him away from me. In the moment, I somehow got the knife up to his neck. As soon as he felt the knife against his neck, I had the advantage. I backed him out of the store and told him he was not allowed back in.

I was terrified that I would go to jail for defending myself. I was sure I was going to be fired because I was carrying knife, against store policy.

Amazingly, the video did not show the knife in my hand. You could only see this hulk of a man pick me up and throw me into the closet. Then for what appears to be no reason, him backing away looking scared. It was obscured the entire time by the way I was holding it.

Not the most terrifying night I have ever endured. But it is up there on the list.

Have you ever had a scary night story happen to you? We want to hear in the comments.

There are humane ways to tell someone to go home after a... liaison.

How can one be so rude after being so intimate?

I'm not saying you have to snuggle and profess love, but damn, a quick... "thanks, I hope life is kind to you" goes a long way.

Redditor sumyungdood wanted to hear the tea about the times they had to tell a lover to take a hike. They asked:

"What is the worst way someones asked you to leave after sex?"

People Confess Which Guilty Pleasures They're Hiding From Their Significant Other

Most couples are inseparable and enjoy doing everything together, thanks in part to shared mutual interests.