A Collection Of The Happiest Facts Of All Time To Remind You How Amazing The World Is. 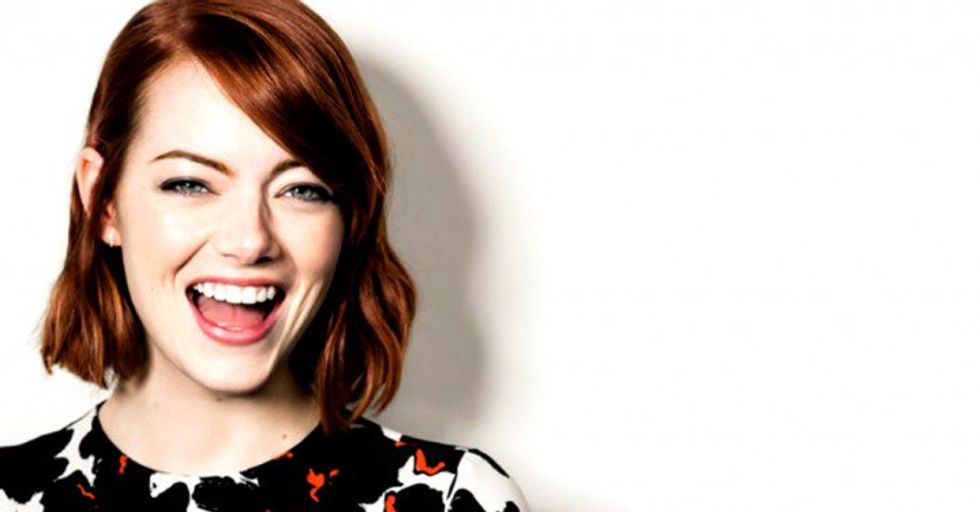 It seems like ever since that fateful inauguration day on January 20th, the world has been nothing but bad news. Heck, it was a lot of bad news before that, too. 2016 seemed like an actual piece of garbage for most people. Though it's important to acknowledge the crap show that our world has been recently, it's equally important to take some time to create balance. Here are some hilarious, happy, and otherwise uplifting facts to provide some much needed indulgence in the lighter side of life before you get back to the real world. Because hey, if kit-kat had anything right, it's that we all deserve a break every once in a while.

2. Cows have best friends and they tend to spend most of their time together.

4. NASA had to relabel the penis sleeve for urinating in space suits from small, medium, and large to large, gigantic, and humungous because astronauts would only choose the large and they kept slipping off.

5. The voice of Winnie the Pooh and Tigger, Jim Cummings, calls childrens hospitals in his spare time to cheer up sick children.

6. The day of his assassination, Martin Luther King Jr. got in a pillow fight in his hotel room.

7. Not only do penguins mate for life, but they also spend time finding a pebble to give their mate in order to propose.

8. During the Christmas Truce of 1914, German and British soldiers played a game of soccer in the no mans land between trenches.

9. Cats bring you dead animals because they think youre just (Continued)

they think youre just a crappy cat that cant survive on its own. Cats bring you presents!

11. In April 1930, the BBC reported that there was simply no news worth reporting that day, and played piano music instead.

12. The nitrogen in our DNA, the calcium in our teeth, the iron in our blood, the carbon in our apple pies were made in the interiors of collapsing stars. Were all made of star dust.

13. We now have less crime, a lower death rate and longer life expectancy than at any other time in human history.

14. For someone, somewhere in the world, today is the most amazing day of their life.

15. Every year the Netherlands sends 20,000 tulip bulbs to Canada just to thank them for (Continued)

just to thank them for their aid in the Second World War.

16. Every year, millions of trees grow thanks to squirrels forgetting where they buried their nuts.

17. Apollo 17 astronaut Gene Cernan, the last man to walk on the Moon, wrote his daughter initials there. Theyll last at least 50,000 years.

18. Neurologically speaking, seeing somebody else smile actually makes you happier.

19. Aside from a sample in a lab, Smallpox is completely extinct. No one else will ever die from it again.

21. Popsicles were invented by an 11-year-old who left a glass of soda with a stirring stick out on the front stoop overnight.

22. Researchers say that 1 week of camping can actually (Continued)

1 week of camping can actually reset our biological clock and synchronize our melatonin hormones with sunrise and sunset.

23. Another Mr. Rogers fact! Mr. Rogers personally replied to every piece of fan mail that he received. So sweet.

25. The handshake is thought to have originated as a gesture of peace indicating that the shakers hands held no weapons.

26. The gender neutral term for a niece or nephew is nibling.

27. Volvo invented the life-saving three-point seatbelt, and instead of capitalizing on it, gave the patent away so that other car manufactures could use it to save lives.

28. There are vending machines in Istanbul that dispense food and water for stray dogs. The price? An empty recyclable bottle.

29. A couple invited the Queen of England to their wedding as a joke, and guess what happened. The Queen (Continued)

The Queen actually went! Talk about a woman of the people.

30. The chills you get when listening to music are a result of the brain releasing dopamine in anticipation of the peak moment of a song.

31. Keanu Reeves gave $50 million of his $70 million earnings from The Matrix sequels to the special effects and makeup staff, saying Money is the last thing I think about. I could live on what I have already made for the next few centuries.

32. Angelina Jolie purchased 60,000 hectares of Cambodian land and turned it into a wildlife reserve employing former poachers as rangers.

33. In order for Princess Diana to experience what it is like to go out for a night out on the town as a "normal person", Freddie Mercury once dressed Princess Diana up as man in aviators and leather, and took her out clubbing.

34. "Fart Battles" were a popular art scroll created in Japan during the Edo period.

35. You can change your language on Facebook to "Pirate."

36. In 1930, Ruth Wakefield mixed Nestle chocolate pieces into her cookie dough after running out of bakers chocolate whilst making chocolate cookies. Instead she actually (Continued)

Instead she actually created chocolate chip cookies, and later sold the idea to Nestle for a lifetime supply of chocolate.

37. When you see a cat rubbing up against a human, it is being affectionate but also marking its territory to make other cats aware.

38. Beyoncs bodyguard once broke her toe by standing on it accidentally whilst trying to protect her from a crowd of fans. Now that's dedication!

39. There is a long-term care facility in the Netherlands that allows college students to stay for free in exchange for 30 hours of volunteer per month. When students come home from a class, concert, or party, they share those experiences with their elderly neighbors, some of whom are over 90

40. The reason Snakes on a Plane kept its ridiculous title was because Samuel L Jackson thought it was funny.

41. Urchin is actually the Middle English term for "hedgehog". Sea Urchins were once known as Sea Hedgehogs.

42. An Alabama bloodhound once joined a half marathon after her owner let her out to go pee. She ran the entire 13.1 miles and finished 7th.