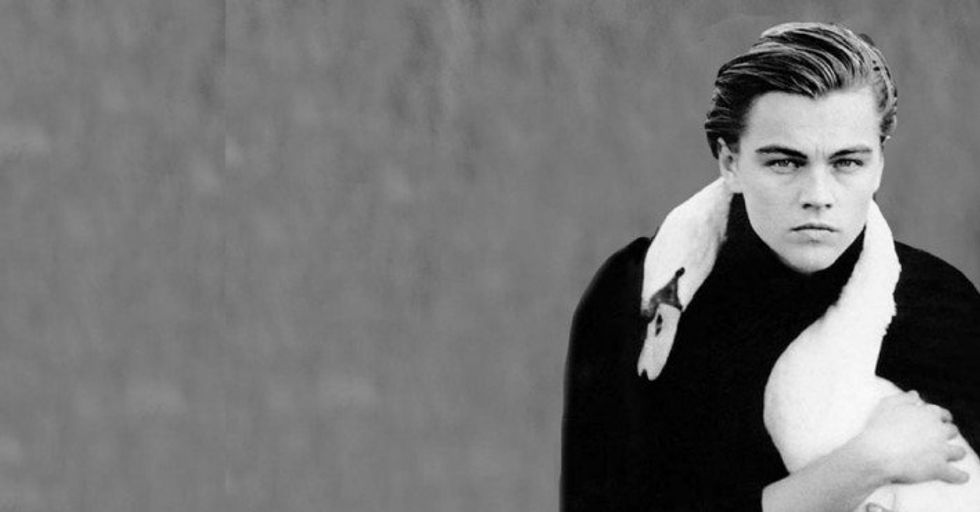 I'm not the kind of person who tries to be cool or trendy, I'm definitely an individual.

These facts are all sourced to IMDB.

By now, the whole world has heard about Leonardo DiCaprio's oscar win for the Revenent.

But most people don't know that during filming, he compromised his vegetarian values to bite a raw cow liver.

In the scene where DiCaprio was sharing a dead buffalo with another actor, the props department handed him a fake liver.

"The gelatin one didn't look right to me. It wasn't bleeding the right way when I was biting into it," DiCaprio said.
He knew that he didn't want to compromise the authenticity of the film, so opted for the real thing.

In The Aviator, DiCaprio plays billionaire pilot Howard Hughes, whose stuggle with OCD included a severe fear of germs, wearing tissue boxes for shoes, and never cutting his nails.

During the filming, Leo was so invested in the role, that the obsessive compulsive disorder that he had as a child returned.

While filming the scene where DiCaprio slams the grasshopper in the mailbox and decapitates it, he didn't realize he wasn't supposed to actually kill the insect. When asked about the incident, he said,

"I didn't know I wasn't supposed to kill him. They said put the head in and slam it. So I killed one and that is the take they used. There was a whole bunch of animal rights people on the set to make sure that the grasshopper didn't get its head chopped off, and I didn't know, and they complained. But it was too late when its head was on the floor. But if you think about it, an animal rights person for a dirty little grasshopper?! I mean, that's a bit ridiculous, don't you think? I think they should be helping some homeless people or something...

Continue to the next page for The Wolf Of Wall Street, Catch Me If You Can, and more...

During the filming of Django Unchained, DiCaprio unintentionally slammed his hand into glass, creating a gash that later required stitches. But that didn't stop him from doing his job. As his hand bled quite visibly, DiCaprio kept going, even using the hand as a dramatic new prop. At one point he smears his bloodied hand over Broomhilda's face in an act of evil dominance. And Broomhilda (Kerry Washington) looks horrified as he does it. That was the take that director Quentin Tarantino kept in the film.

On the final night of shooting in Nova Scotia, one or more pranksters mixed the dissociative hallucinogen PCP (angel dust) into the clam chowder served to the cast and crew. 80 people were taken ill, and more than 50 were hospitalized with hallucinations. When James Cameron realized what was happening, he forced himself to vomit before the drug took full effect. Bill Paxton felt listless for two weeks after the incident (although PCP's primary effects only last a few hours, the drug itself can take eight or more days to completely metabolize out of the body). The culprit(s) were never caught.

6. The Wolf Of Wall Street

Matthew McConaughey's scenes were shot on the second week of filming. The chest beating and humming performed by him was improvised and actually a warm-up rite that he performs before acting. When Leonardo DiCaprio saw it while filming, the brief shot of him looking away uneasily from the camera was actually him looking at Martin Scorsese for approval. DiCaprio encouraged them to include it in their scene and later claimed it "set the tone" for the rest of the film.

In an interview with Margot Robbie, she reveals that for the scene where Jordan and Naomi have sex for the first time in her apartment and her dog tries to jump up and bite him, that they had trouble getting the dog to jump, so they had to put dog food and chicken livers all over Leonardo DiCaprio's feet and between his toes.

Continued on the next page!

To get her to achieve the way he wanted her to sloppily kiss Leonardo DiCaprio, Steven Spielberg asked Amy Adams to pretend she was starving to death and eating a cheeseburger.

Leonardo DiCaprio's version of Romeo's speech at Juliet's bier was so good it movedClaire Danes to tears, nearly ruining the scene. The moment the director yelled "cut!," Danes smacked DiCaprio on the arm and said, "Don't make me cry. I'm supposed to be comatose, here!"

While directing the love scene between Leonardo DiCaprio and Kate Winslet, director Sam Mendes (husband of Winslet at the time) was so uncomfortable with the scene that he opted to watch the monitor from another room. Kate Winslet has been cited saying that of all the sex scene partners she has had, Leo was her favorite.