50 Of The Best Seinfeld Quotes Of All Time. These Are Too Good! 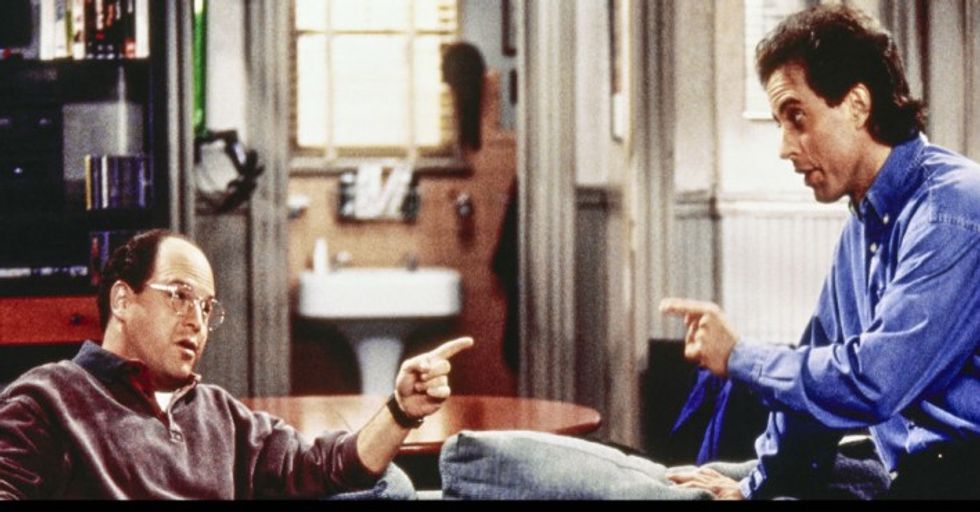 Some of the most lovable quotes from a classic show! Sit back, relax, and enjoy.

Mr. Ross: I don't think there's any greater tragedy than when parents outlive their children.

George Costanza: Yes, I hope my parents die long before I do.

Jerry: Boy, a little too much chlorine in that gene pool.

Kramer: See, this is what the holidays are all about. Three buddies sitting around chewing gum.

Kramer:The carpet sweeper is the biggest scam perpetrated on the American public since One Hour Martinizing.

George Costanza: He fires people like it's a bodily function!

George: Why do they make the condom packets so hard to open?

Jerry: Probably to give the woman a chance to change her mind.

Jerry: Father, Ive never done this before, so Im not sure about what Im supposed to do.

Priest: All right, my son. You can start by telling me your sins.

Mr. Peterman: Elaine, can you keep a secret?

Kramer: Youre becoming one of the glitterati.

Jerry: Thats the true spirit of Christmas; people being helped by people other than me.

More Seinfeld quotes on the next page!

Elaine: Perhaps theres more to Newman than meets the eye.

George: This woman hates me so much, Im starting to like her.

Kramer: You know what they say, You dont sell the steak, you sell the sizzle.

Jerry: You will be stunned.

Jerry: You cant eat this soup standing up. Your knees buckle.

George: She calls me up at my office. She says, We have to talk.

Jerry: Ugh. The four worst words in the English language.

George: That or Whose bra is this?

Cushman: I gotta tell you, you are the complete opposite of every applicant weve seen. Mr. Steinbrenner, sir. Theres someone here Id like you to meet. This is Mr. Costanza. He is one of the applicants.

George Steinbrenner: Nice to meet you.

George: Well, I wish I could say the same, but I must say, with all due respect, I find it very hard to see the logic behind some of the moves you have made with this fine organization. In the past twenty years, you have caused myself, and the city of New York, a good deal of distress as we have watched you take our beloved Yankees and reduced them to a laughing stock, all for the glorification of your massive ego.

Kramer: You know youre not supposed to brush your teeth for 24 hours before you go to the dentist.

Jerry: I think youre thinking of Youre not supposed to eat 24 hours before surgery.

Kramer: Oh, you gotta eat before surgery. You need your strength.

Jerry: Elaine, breaking up is like knocking over a Coke machine. You cant do it in one push; you gotta rock it back and forth a few times and then it goes over.

George: Why is nice bad? What kind of a sick society are we living in when nice is bad?

Continue to the next page for more great Seinfeld quotes!

Kramer:Do you have any conceivable reason for even getting up in the morning?

Jerry: People on dates shouldnt even be allowed out in public.

Frank Costanza: You have the chicken, the hen, and the rooster. The chicken goes with the hen... So who is having sex with the rooster?

George Costanza: I don't think I've ever been to an appointment in my life where I wanted the other guy to show up.

Jerry: You have made some good exits.

Elaine: Why does everything have to be so... jokey with you?

George: The sea was angry that day, my friends, like an old man trying to send back soup in a deli.

Kramer: Who's gonna turn down a Junior Mint? It's chocolate, it's peppermint...it's delicious!

Kramer: I need the secure packaging of Jockeys. My boys need a house!

Jerry Seinfeld: You, my friend, have crossed the line between man and bum.

More hilarious and amazing Seinfeld quotes on the next page!

George Costanza: You should've seen her face. It was the exact same look my father gave me when I told him I wanted to be a ventriloquist.

Jerry Seinfeld: Sex, thats meaningless, I can understand that, but dinner; thats heavy. Thats like an hour.

George Costanza: Jerry, just remember, it's not a lie if you believe it.

George Costanza: If you can't say something bad about a relationship you shouldn't say anything at all.

Telemarketer: Hi, would you be interested in switching over to TMI long distance service?

Jerry: Oh, gee, I can't talk right now. Why don't you give me your home number and I'll call you later?

Telemarketer: Uh, well I'm sorry, we're not allowed to do that.

Jerry: Oh, I guess you don't want people calling you at home.

Jerry: Well, now you know how I feel.

Jerry: I wanted to talk to you about Dr. Whatley. I have a suspicion that he's converted to Judaism purely for the jokes.

Priest: And this offends you as a Jewish person?

Jerry: No, it offends me as a comedian.

Elaine: You know what your problem is? Your standards are too high.

Jerry: I went out with you.

Elaine: That's because my standards are too low.

Jerry: Surveys show that the #1 fear of Americans is public speaking. #2 is death. Death is #2. That means that at a funeral, the average American would rather be in the casket than doing the eulogy.

George Costanza: Kramer goes to a fantasy camp? His whole life is a fantasy camp. People should plunk down $2000 to live like him for a week. Do nothing, fall ass-backwards into money, mooch food off your neighbors and have sex without dating. THAT'S a fantasy camp.

Jerry: I can feel his blood inside of me, borrowing things from my blood.

Can't get enough? You're in luck... more on the next page!

Jerry: You can't keep avoiding her.

George Costanza: Why not? If she can't find me, she can't break up with me.

Jerry: You see, Elaine, the key to eating a black and white cookie is that you wanna get some black and some white in each bite. Nothing mixes better than vanilla and chocolate. And yet still somehow racial harmony eludes us. If people would only look to the cookie, all our problems would be solved.

Ronnie: [to George] I've been living a lie.

Jerry: A house in the Hamptons?

George: Yeah. I figured since I was lying about my income for a couple of years, I could afford a fake house in the Hamptons.

George: Divorce is always hard. Especially on the kids. Course I am the result of my parents having stayed together so ya never know.

George: Youre gonna over-dry your laundry.

George: Youve got to apologize.

George: Because its the mature and adult thing to do.

Jerry: How does that affect me?

Know a Seinfeld fan that would love this? Share!

We'd be lying if we said we haven't all made a poor decision in our lives. Whether it's letting a questionable ex back into our lives or pairing that shirt with those jeans, we all have a cringey memory to look back on.

But most of us don't have memories of inventing something terrible, let alone one of the worst inventions ever.

Children believe what their parents tell them about the world to be true because they don't know any better.

That doesn't mean they have to like what they are told. But a good child listens and will act accordingly to be in their parents' good graces.

But sometimes, adults abuse their power and say whatever it takes to get a desired response from a young one–even if what they're saying may not be entirely true.

No two people have the same threshold for pain.

Some people don't even notice pricking their fingers, while others might equate doing so to being fully amputated.

No matter one's threshold, however, being in pain, big or small, is never a good feeling.

Particularly if it's the sort of pain that aspirin or ibuprofen can't take care of.

Some pain is so horrific that those suffering from it genuinely can't imagine going through anything worse.

People Divulge The Most F**ked Up Thing They've Ever Done

We've all done things we aren't proud of.

Be it saying something behind someone's back, a prank that went a little too far, or a heated exchange with a friend or family member, everyone has crossed the line at one point or another.

Thankfully, more often than not, these mistakes can be salvaged with an apology and a little contrition.

Unless you've done something that goes well beyond a simple "I'm sorry."

We’re talking about actions that can only be described as "f*cked up."