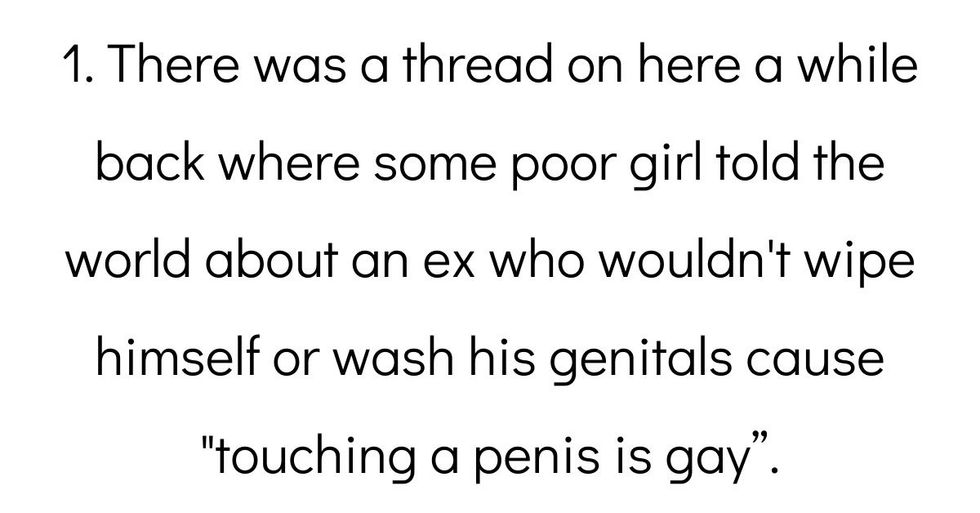 For many insecure fellas out there, anything that is not completely in line with the behavior of John Wayne in an old western film is to be avoided like the plague.

For such dudes, to really throw off the scent, not only is any and all emotionally expressive behavior NEVER displayed, but it must be called out when other, lesser men engage in that kind of moral transgression.

This finger pointing often takes a specific form: calling it "gay." It's a bit absurd, as the insult arises from a feeling that a man isn't performing gender right. But being gay has nothing to do with gender.

Hilarity ensues, though, when the calling out becomes so paranoid and vigilant that very strange things are deemed "gay."

u/ma_damn_blueberry asked, "Straight men of Reddit: what's the strangest thing you've been told not to do because 'that's gay'?"

A Real Man Would Start Over

Can't Imagine How Ugly the Cup Holder Dispute Got

My brother-in-law and I went to a movie. He told me it was gay to sit next to him. I told him to stop being a b*tch and I sat right next to him. For the entire movie.

Because apparently it's like having a tiny peen in your mouth.

I still use straws and haven't had the urge to be with a man yet.

Linen shopping. By my best friend.

That's nice bro, but I need towels. Deal with it.

A Far Cry From "No Thank You"

A guy in the bus offered his seat to a woman that was standing. She looked at him and said "Are you gay or something?" like it's gay to be polite.

The Long Stem Mimosa Glass Really Set Off the Alarms

Brunch. If steak, eggs and alcohol at noon are gay, well then f*ck it.

The Most Aggressive Review of a Pedicure

Get a pedicure. Holy f*ck that sh*t feels so good!

A Stone Would be Hotter

Girl - "Because you were smiling so big and laughing a lot"

I grew up in California before moving to the east coast as a teenager.

I've been told all Californian's are gay or at least bi, more than once.

I wore my watch on my right hand. Apparently when i was in high school that gay as f*ck.

Heterosexuality is Generated From the Plaque Between Your Teeth

Apparently, gingivitis is something only hetero people have.

I sew renaissance type costumes as a hobby. I've been told I should stop doing it because sewing is either gay or women's work.

On the plus side I am a 6'2 bear of a man so when I tell them to f*ck off, they usually leave it be.

My sister told me that her Psychology teacher explained that every man that went to see a prostitute were secretly gay because they were seeking out the previous man's penis inside the prostitute's vagina.

"Citrus is a Fruit, My Hands are Tied"

Tried to order a Mojito at a bar back when they were all the rage since I had only heard of them and never tried one.

Waiter looked at me and said "No. You're not gay so i wont get that for you."

My sister told me this gem.

Her male friend said he hated being a guy because he COULDN'T USE AN UMBRELLA.

"Lactose Proficient" is an Incredible Phrase

Drink milk. Especially chocolate milk. I've been singled out on 3 occasions, and was once called gay for it. By store clerks, no less.

Gay is the New Respectful

Having friends that are girls that you don't sexually harass.