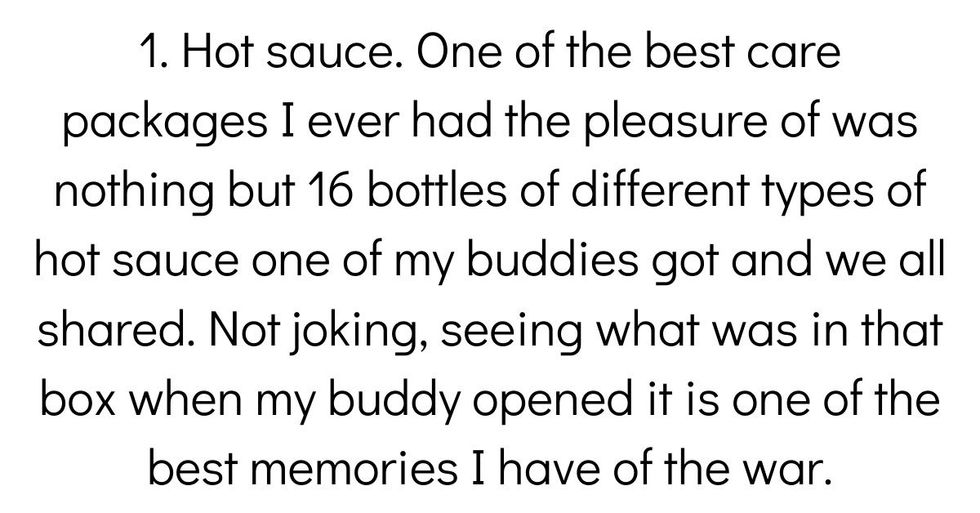 While serving our country, soldiers are deprived of certain things that they were used to having as a civilian. They don't exactly have stuff like candy on the battlegrounds, so receiving packages with fun things is always a special treat. Here are some things that our troops crave the most while they're deployed.

u/ImNotF*ckingSerious asked: Soldiers of reddit, what are things that the military doesn't provide that would be good for people to send in care packages?

My parents sent me a box just absolutely stuffed of snack sized "experimental" Taki flavors. Best thing I ever got. Next was a generic note from a 3rd grader named "Nigel" said "I hope you can see your family again". Kinda murdery, but the intent was good, everyone in the squad got a laugh.

Also disclaimer, I was only in Norway which made the note all the more hilarious.

The letters from kids are always the funniest. My favorite one was "Good luck in the next war." Little guy must have had some insider info...

Make sure your care package isn't for someone in training, they might not be allowed to use those products.

My aunt sent me fuzzy pajamas and a box of chocolates to boot camp. She could not understand why I got in trouble for them and had to throw them away.

I turned 40 while deployed and received a care package from my wife that had a fully inflated Mylar balloon, which I thought was pretty damn nifty and creative. The box had other stuff in it too, so it wasn't suspiciously light, yet when I sliced it open (thank god I didn't slice through to the balloon) up floated the colorful Happy 40th! balloon. Made my week.

What ever you send PLEASE do not pack any soap or detergent in the same box as food. We got some really big boxes that had packages of detergent and lots of candy and all of the candy tasted like tide.

My father in law made me a few lbs of deer jerky long ago. The wife added a few bars of dial to the flat rate box and ruined every bite. I still ate it. I regret nothing.

Condiments such as hot sauce.

Food is not always bad but it's very predictable. Hot sauce makes it much better.

Just make sure you wrap the bottles really well. Postal centers overseas tend to just ignore "fragile" during the shipping and handling process.

Also, the hotter the better. Daring each other to test the hottest sauces we can find is great entertainment.

The best care packages ever.

I've seen a few of these on here already, but I will reiterate for the important ones:

This was specific for me, I just wanted to share it: My girlfriend used to put a small note on anything she sent me. Message simple and sweet, and she'd leave a kiss in lipstick on it and spritz it with her perfume. I don't think I ever told her how much that meant to me. But damn sometimes that really got me through. I still have some of those notes.

My parents sent me a care package full of cheap toys once. Dart guns, noise makers, little toy army men, a small etch a Sketch etc. We all played with the toys for a day or so and it was entertaining, and afterwards we gave all the toys to local kids who enjoyed the hell out of them.

Saw a kid 3 weeks later who made the etch a sketch into a weird necklace. Looked a little like a 3rd world version of Flavor Flav. Kinda made me feel like not all is bad in the world.

Better than a woobie.

My all time favorite was a church group where each contributor made a blanket representing their home state. I still have that blanket and NO ONE, not even my girlfriend is allowed to use it. It's draped over the back of my reading chair in the library. It's even better than a woobie.

"It's even better than a woobie."

Now now now, let's not get ahead of ourselves.

Someone sent us two rum cakes. Wrapped in cellophane, still moist and delicious. That was a golden, sunlit moment amid a dreary and painful deployment.

We sent Christmas cake... It was so moist with the rum we got them merry....and then sick .... But they all loved it..

I'm on it buddy, I have some time tomorrow. Anything else you want?
-Skinwalker-

Batteries. You wind up having half as many as you need, and it gets you mad. Command want you mad, so you take it out on the enemy.

Cards, travel games, dice. Not only is it nice to have entertainment that doesn't need batteries, but can be stored in a pocket, and sometimes traded or gifted to a local as goodwill.

Baby wipes. Does it need to be stated why these are good and useful?

There's a reason why they have PTSD.

I knew someone who was infantry in Iraq so I sent his squad a crate of Gatorade powder. Like enough to make vast quantities of the stuff when mixed with water. According to him they had water but not nearly enough electrolyte replenishment. It was very well-received.

I also made the mistake of sending him a cheap digital camera (this was slightly before phone cameras were any good) for him to keep, and asked him to send pictures. He did, and some are horrifying beyond description. I have no idea how anyone can *not* get PTSD after living through that.

I was always grateful for care packages when deployed, but 2 hard lessons learned:

Soldiers will generally always have access to basic hygiene supplies but rarely the nice, name brand stuff. Those sorts of things can really make someone's day.

When sending a care package remember that you're trying to make someone's deployment less miserable, not providing for their basic needs. Please don't send stuff like razors from the dollar store. While the thought is appreciated, that sort of thing usually sits unused in a pile at the MWR.

People Share The Best Historical Facts No One Ever Talks About

People Share The Easiest Ways To Spot A Sociopath Or Psychopath

People Break Down Why They Just Stopped Giving A F***